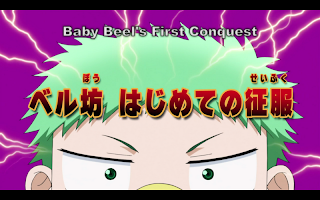 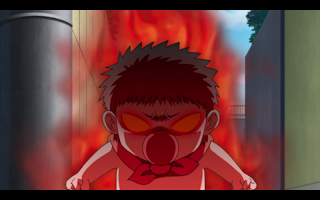 Baby Beel’s First Conquest
After seeing a TV show featuring demon children’s first conquest, the Great Demon Lord decides to make Beel film an entry for the show. Hilda follows him secretly, along with Oga, Furuichi, and Lamia, to film him and help him if necessary. 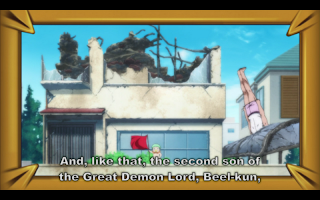 After running into several “dangers,” and receiving some help along the way, Beel finally makes it to his destination–Furuichi’s house. Which he then proceeds to conquer, using the power of the Demon Sword Allaindelon. 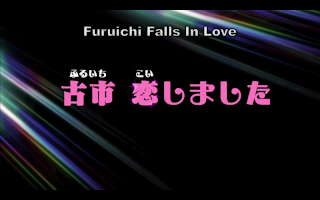 Furuichi Falls in Love
After a sexy dream turns into a nightmare, Furuichi wakes up in the living room. He tells Allaindelon to get out of his room, but the demon reminds him that after the first half of the episode his room was demolished. Furuichi complains about his back aching, and Al offers to give him a massage. At which point Furuichi’s little sister walks in on them. 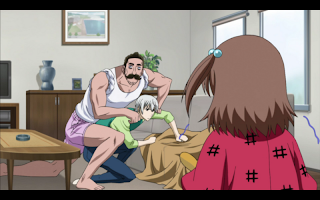 While at school Furuichi runs into a girl, who asks him if he would visit with her for a moment. Back in class he is in a strangely good mood, and disappears to the infirmary. Natsume suggests that Furuichi probably has a girlfriend, but the rest of the class doesn’t buy it. 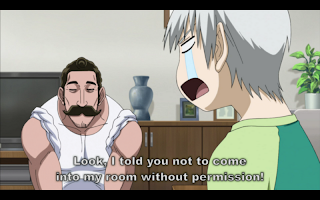 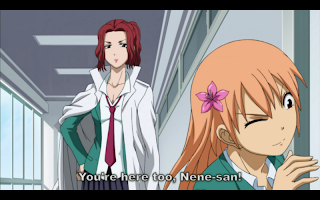 Furuichi keeps making excuses to go visit the nurse’s office, while he continues to look more and more worn out. Komainu tells Aoi that Furuichi is being possessed by a ghost, and she tells Oga what she’s found out. The two of them approach Furuichi and tell him what Yuko really is. 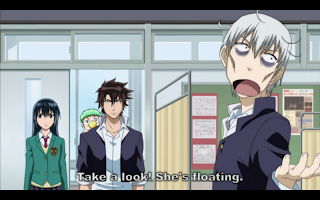 Furuichi does not care, and is ready to accept her confession to him. Only she confesses to the ghost possessing him instead. The ghost Johnny and the ghost Yuko pass on to the afterlife together. 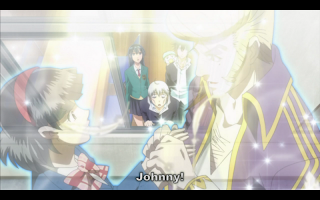 My Opinion
These two-episodes-in-one reviews are a bit weird to write. There isn’t enough substance to write about either of the halves of the episode, but because it’s filler there’s no real need to get into much detail. 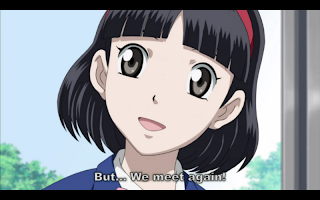 Furuichi Falls in Love was surprisingly entertaining. Despite being unable to shake the strange feeling that the anime was turning into Bleach Light (hey, that’s actually a pretty good name…), the ending sold me on the story. Most of the times I’m left wondering why filler even exists. Well, that’s not quite true, I know exactly why it exists, but I still ask myself if the stories being told were really worth the telling. They’re there to just waste time, to give the manga artist a chance to pull ahead, but it’s rare to find a filler episode, or arc, that deserves to exist. For the very least, this half an episode deserves to exist because it made me laugh at the end. 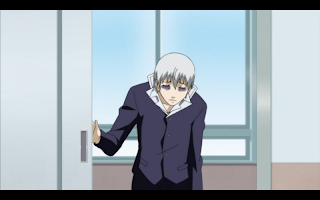 And really, is more praise even needed? 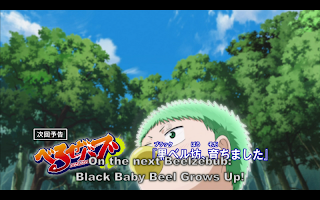