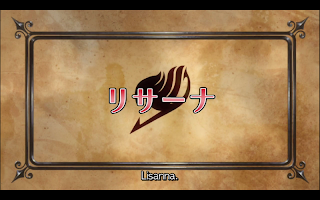 Introduction
With this episode the Edolas arc comes to a close. Besides the episode itself, we must consider the arc as a whole. Is it better or worse than the manga? Is this episode a good ending to the arc? Both questions will be considered in this review. 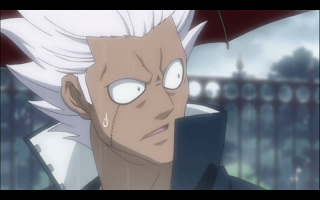 Plot Summary
When Natsu and group return to Earthland, they find everything back to normal. Except for all the Exceed flying around. Charle is still angry at them, and says they should send them back to Edolas. After the orders they gave her to take out the Dragonslayers, she considers them dangerous. 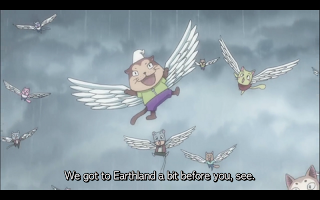 Queen Shagotte explains the truth about why she sent the eggs to Earthland. She saw a vision of the sky islands falling, and thought that this was going to be brought about by the humans. She decided to evacuate the unborn children, claiming that it was a mission, so that the truth would not cause a panic. She and the elders borrowed anima from the humans, and sent the eggs to Earthland. 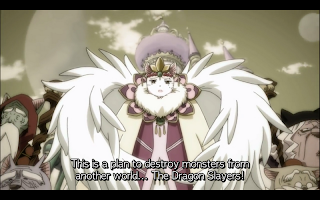 Charle, as Shagotte reveals, has the same latent power as her. Except that her visions of the future were subconsciously activated, and at such a young age she had no way of discerning the visions from her own memories. The things she saw were events from the future, that led her to believe she was given a mission to exterminate the Dragonslayers. But there never was a mission. 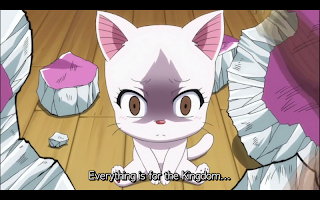 After Charle has time to digest all that she’s heard, she immediately homes in on the most important point. Why does she have the same powers as the queen? Shagotte’s response leaves little to the imagination. 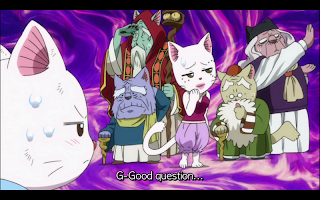 The Exceed decide to track down all the children that were evacuated. While they fly off, Shagotte has a moment to talk to Happy’s parents, confirming that she is in fact Wendy’s mother, but that she cannot consider herself that until she finds all the children she evacuated from Extalia. Overall there are several touching moments between the parents and their children. And Erza learns that there isn’t much difference between Nichiya or Ichiya. 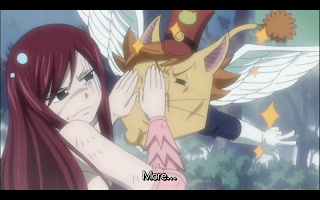 After the other Exceed leave, Lily reveals himself. Only he’s turned into a chibi version of his former self. He demands to join Fairy Tail, and Gajeel more or less gives him an affirmative answer. 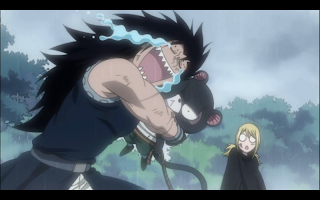 Lily then reveals that he captured a suspicious person, and pulls a tied up Lisanna into the clearing. Lisanna tackle hugs Natsu, and reveals that she is their Lisanna. Right after being injured by Elfman, she was sucked into Edolas by a stray anima. She explains that Edolas’ Lisanna had died, and anima was trying to sort out some kind of balance. 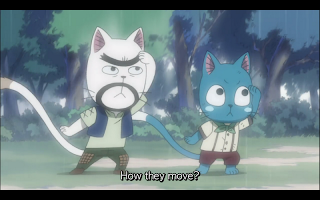 Lisanna grew accustomed to living in Edolas, and when Natsu and Happy showed up she wanted to return home. But she didn’t want to cause Edolas’ Mira and Elfman any more pain, so she decided to keep silent about who she was. When anima started sucking up all magic, she found herself being pulled in, just like the other characters from Earthland. Mira and Elfman reveal that they knew she wasn’t really their sister, and bid her a tearful farewell. 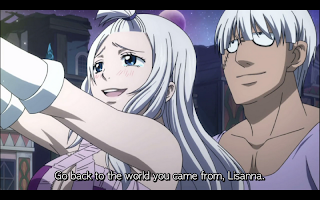 Lisanna then runs to the cathedral, where Mira and Elfman are mourning over her grave. She shares a tearful reunion with her siblings, who can hardly believe that she is still alive. 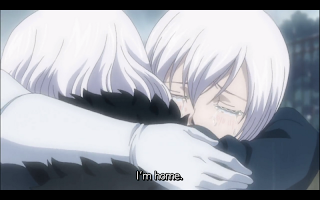 My Opinion
And with this the Edolas arc is complete. I have to admit, I liked it more the second time around. I think the main reason I consider this one among the better later arcs is because there isn’t really the big “Natsu vs the Big Bad”. Yes Natsu does defeat the king, ultimately it is his attack that finishes it, but he never could have done it without Gajeel and Wendy. It helps keep the series from getting too formulaic, something I fear Mashima struggles with sometimes. 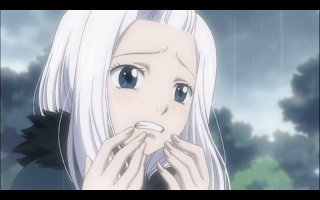 As for this episode itself, I liked Lisanna’s return more this time than I did in the manga. In the manga it felt rushed, and didn’t make a whole lot of sense. Here there was pretty music to distract me from the plot holes. That and I was a shipper back when I read the manga, I am slightly less of a shipper now, so I can be objective. 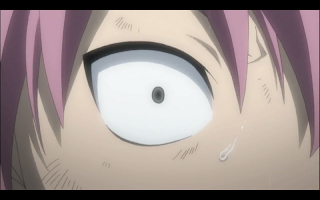 I can’t help but wonder, what exactly does it mean for her character that she wanted to stay in Edolas with her not real siblings, rather than go back with Natsu and Happy? I’m not saying anything, it just seems a bit odd. 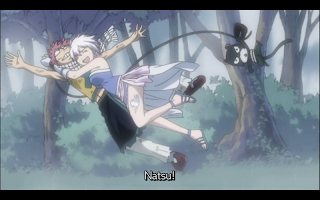 Translation: She isn’t in love with Natsu. Suck it shippers!

Lisanna is not my favorite of characters. Personally I blame that on the anime team putting her in too much filler. Yes there is a lot left unsaid by Mashima, but the anime writers really didn’t do much besides belabor the only character trait she had. And thus we end up with her harping the childhood marriage promise as if she wandered out of a harem anime. 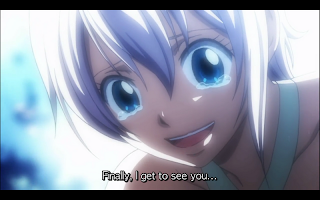 I said she isn’t in love with Natsu!

At the risk of spoilers, I have to say that she hasn’t done much in the manga past this point. Which makes me wonder what the purpose of having her back really is. Or at least that’s what I thought when my cynical barriers were up at full force when this happened in the manga. With the anime those barriers crumble. And I have to confess—all things considered—this was worth it, if just to see the reunion between the siblings. The anime built up the tragedy behind her apparent death so much more that it made the last scene of this episode work. It’s the exact opposite of what happened with Mystogan. They did the ground work, and wove this story into the whole of the main story, rather than side chapters and whatnot, making the emotional payoff all that more poignant. 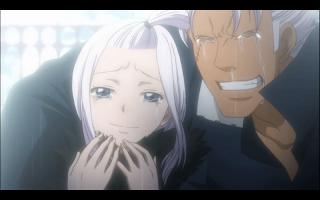 While I am not one to tout filler, in the case of the Lisanna storyline, it worked perfectly here (with one notable exception). So much more time was spent on Mira and Elfman’s pain. If only they could have done something similar for Jellal. I really do think that it would have been to the anime’s benefit to include a filler arc that featured Mystogan interacting with the main characters. It would have helped the manga get ahead so there was more than one arc in between it and the anime. And with the right writers it would have fixed the major complaint I had with this arc. 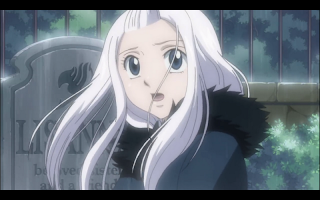 It’s a shame they missed the opportunity on this one, I really think a filler arc with Mystogan would have been interesting. So far I haven’t seen any terrible filler out of Fairy Tail, so I think they would have done a great job. 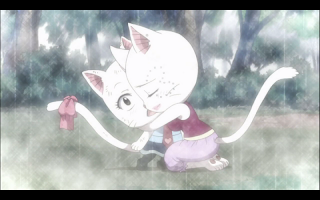 The first half of the episode was fairly touching, with Shagotte revealed as Charle’s mother. I hope this is a plot thread that will be picked up later on. There is a lot of possibility for storylines with a much stronger emotional core. Something I think Fairy Tail could benefit from greatly. 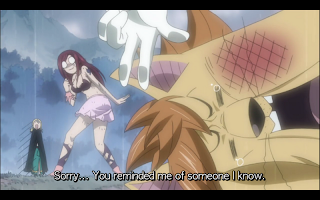 And Ichiya, whether he be the Nichiya version, or the human version, remains the greatest character in existence. But, it feels like a lot the ideas introduced are never treated with the proper gravitas. The Exceed were megalomaniac supremacists, and suddenly now that they realize their queen isn’t all powerful they are suddenly nice? It feels too easy. But it’s right up Mashima’s alley, since overall Fairy Tail has an uplifting message. It may not be the most realistic, but I very much appreciate the fact that Mashima focuses on positive things, rather than going into negative territory. Yes it can be unrealistic how the characters can win because of friendship and all that, but I can’t fault him for it that much. His agenda is to have his readers feel good, and I can’t fault that. 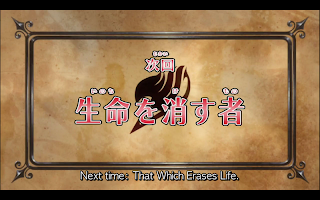