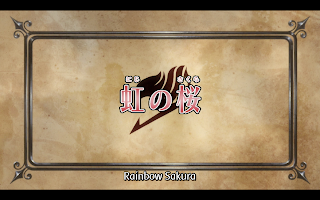 A single omake chapter doth not an episode make.  Which is why we are sometimes faced with canon filler episodes like this one, where part of the episode is taken from an omake chapter that occurs in times unspecified of the manga, and the other part is filler created by the studio writers.  While some were peeved by the four episode mini-filler arc, I for one enjoyed it.  The question is now, is the filler half of this half-canon episode good enough to not ruin the entirety of the next almost-half-hour? 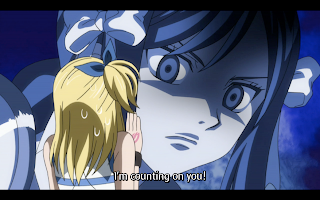 For some odd reason the episode starts with the old, “This is Fiore, etc, etc” opening.  Not sure why that’s there.  In contrast to the old opening prologue, the new opening is Evidence, the seventh Fairy Tail opening, by Daisy x Daisy, who were responsible for the fifth ending.  It covers the Edolas arc, and I have to say, it seems somewhat unreal that we’re already that far.  I can still remember the early days of this anime, when I was terrified that it could end at any moment.  Given the way things are going now, I feel confident saying that this anime will be going on for a while, the fact that it’s perpetually in danger of catching up to the manga notwithstanding. 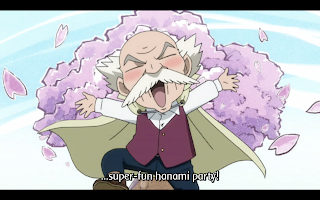 Per the omake chapter, sakura season has come to Magnolia, and the entire town, especially Fairy Tail, is preparing for the cherry blossom viewing party.  In the meanwhile Natsu and team are all the way up on Mnt Hakobe, where he and Lucy rescued Macao in the second episode.  They’re looking for some herb which can temporarily boost a mage’s magical power.  They plan to get extra that they’ll use as a prize for the bingo competition at the picnic.  Lucy explains everything to Wendy, while the others beat up on the monkey things from the second episode. 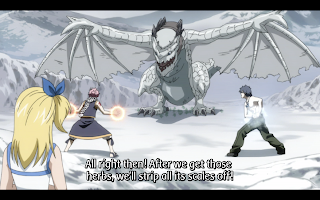 When they finally find the herb they are attacked by a wyvern, and suddenly I get the feeling that Mashima’s love for Monster Hunter is sneaking into the anime as well.  The fight against the Wyvern causes an avalanche that buries Lucy as she’s trying to gather up the herb, while Natsu, Gray, and Erza fight. 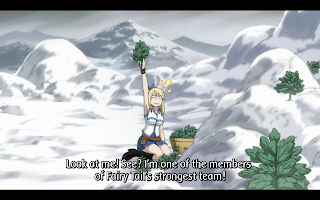 The next day Lucy has a cold and can’t go to the sakura viewing party.  As far as filler added to canon material I think this episode does a pretty good job.  Not only does the first half of the episode pad it out just right, and it’s entertaining, but it also gives a reason for Lucy to have a cold in the first place. 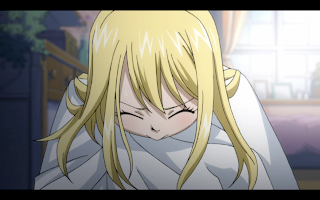 In contrast, the way they explain Wendy’s healing powers away (she isn’t in the manga during the time the omake was set in) is that apparently she already cast the spell, and that Lucy will be better tomorrow. 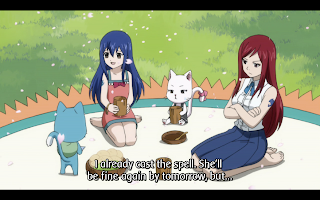 Oh really? You can heal serious poisoning immediately, but the healing spell for a cold takes an entire day to work? She’d be better on her own just by getting bed rest and Vitamin C! You’re the worst healing mage ever!

For the record, I think Aya Hirano does a great job with Lucy’s sick voice.  She sounds like she’s absolutely suffering. 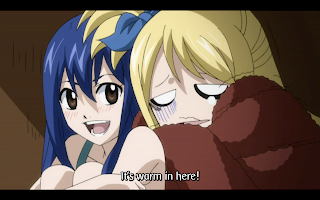 No thanks to you, bearer of false promises.

So while everyone else has fun, Lucy lies in bed sick and suffers from flashbacks.  Fortunately they are mercifully short, and don’t go on like a clipshow.  It’s a shame though, this is one of the more obvious cases of padding done throughout the series.  I have to admit though, as much as I don’t like using old footage to pad out episodes, it does give a nice retrospective feeling to the latter half of this episode. 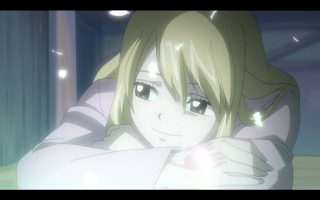 Later, Lucy wakes up to find one of the rainbow sakura trees floating down the river outside her house, in a giant pot on a boat for that matter.  The next day Master Makarov is yelling at the guild, trying to find out who dug up the tree, since the mayor is angry at him.  It doesn’t take Lucy long to figure out who cared enough about her that they dug up the tree and put it on a boat in the middle of the river. 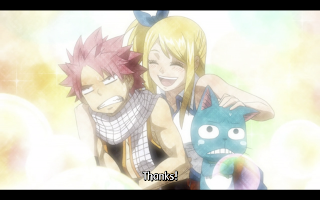 As far as filler goes, this one was pretty good.  Even the obvious padding with old footage was well executed, and broken up by cutting back to the guild’s bingo game.  As I’ve already said; Fairy Tail has good filler.  Or, at the very least, it has writers that know what kind of filler sucks. 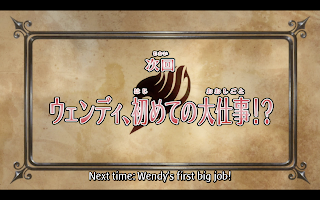