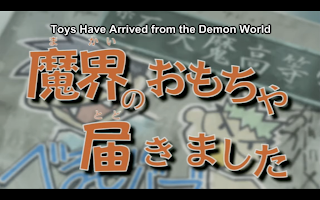 I have not been looking forward to reviewing this episode.  I did not want to watch it and kept putting it off as long as possible.  This episode, and what I saw from the previews, is the reason why all my reviews are coming in so late.  But I’ve finally decided I need to tackle this beast and just get caught up once and for all.  All I need to do now is write the four Beelzebub reviews I’m late on and I’ll be completely caught up on my anime reviews for the first time since…ever. 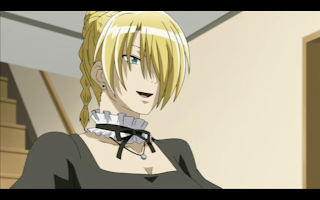 Hilda promised she would go out with me if I caught up on my reviews.
…
What?

The first half of the episode isn’t so bad, in fact, it’s actually its own episode.  Hence the two titles for this episode.  Huh, that’s a new way of doing things.  Two episodes as one.  While on the one hand I find it odd that they didn’t just extend the material they already had from the manga, instead of writing their own original (crappy) filler, I’m glad they didn’t.  Because the first “episode” is well paced, without any of that excessive padding that the anime has been employing so far.  This episode is a perfect example of how the anime should be pace, taking manga-ka Ryuhei Tamura’s gift of pacing and not destroying it by belaboring the unnecessary. 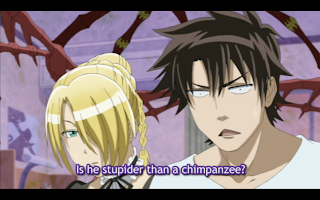 Oga celebrates finally having shrunk the Zebub spell mark by doing nothing but playing video games for a week.  Hilda is of course annoyed by this, and she destroys his playstation.  She then forces him to help her set up a play pen for Beel that turns out to actually be a cage for capturing demon beasts. 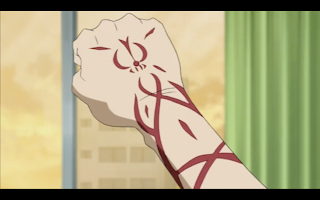 I won’t spoil the rest, just know that you need to at least watch this first half of the episode.  It’s well paced and hilarious, and easily the best non-plot related episodes of the anime so far.  A very good episode.  Unfortunately it was followed up by the second half episode. 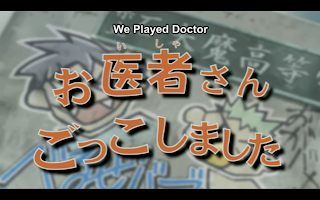 Why?  Just…why?  I put up with a lot from anime and manga, all because most of the time it is downright hilarious.  But when you expect me to watch an entire half episode based entirely on Oga and Furuichi dressing as nurses – FEMALE nurses I might add – then you’ve crossed a line! 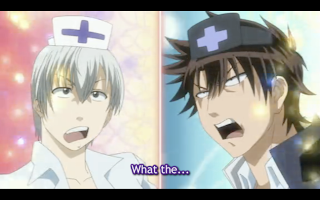 It doesn’t help that the episode isn’t even funny!  In the slightest! 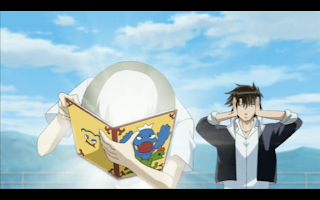 Okay, that’s being a little unfair.  It does start with a follow up from the last episode, with Hilda breaking Oga’s X-Box.  And the part where Oga retreats from Furuichi, frame by frame, without changing his expression, is also funny. 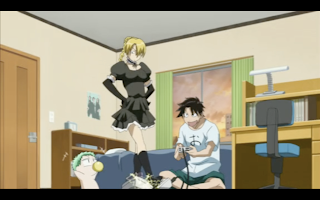 And then the nurse costumes come out.  It’s not even that I’m offended by it, I am after all an anime fan and have learned to put up with a lot of weird stuff, but there’s no reason for it other than to force this horribly written plot!  Seeing guys dress in drag is bad enough, but when it’s accompanied by a horribly written plot, then the grievances just keep mounting. 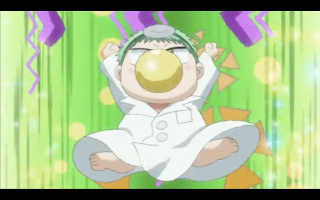 Oga and Furuichi have to heal someone in order to get out of the Nurse outfits, and begin a reign of terror in the nurse’s office.  Which gets kind of nightmarish towards the end because I swear the animators were taking acid when they drew it. 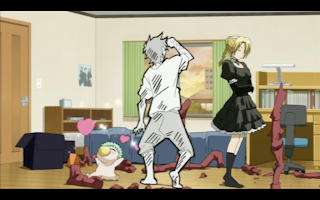 This is what the animators looked like while drawing this tripe.

The biggest kick in the balls, however, is that Oga doesn’t even react to it the way I expect, nay demand, him to react!  Instead of wondering what the writers were taking to come up with this stupid idea, he instead uses it as a chance to do good deeds and shrink the Zebub spell, rather than waiting for days again.  Dude, you can do that without crossdressing.  There is no reason for them to be in these outfits! 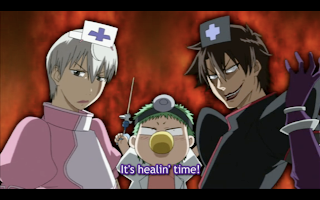 I cannot emphasize the cross-dressing enough. Why was this done!?

I cry for the person whose first exposure to Beelzebub is this episode.  Because this would not only turn someone away from the show, but from anime in general.  Stop giving haters examples against anime, Studio Pierrot! 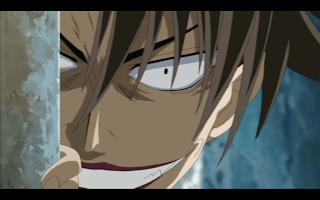 Avoid the second half of this episode, unless you’ve decided to watch the entire series no matter what.  And keep other people from watching it.  Watch the first half, but never the second half.  Just stop the video as soon as that second title card comes up.  And remember, that the anime fan you save from this atrocity of animation might be yourself! 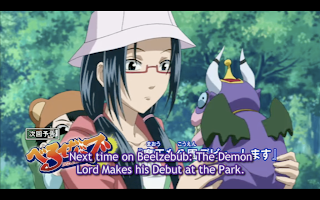