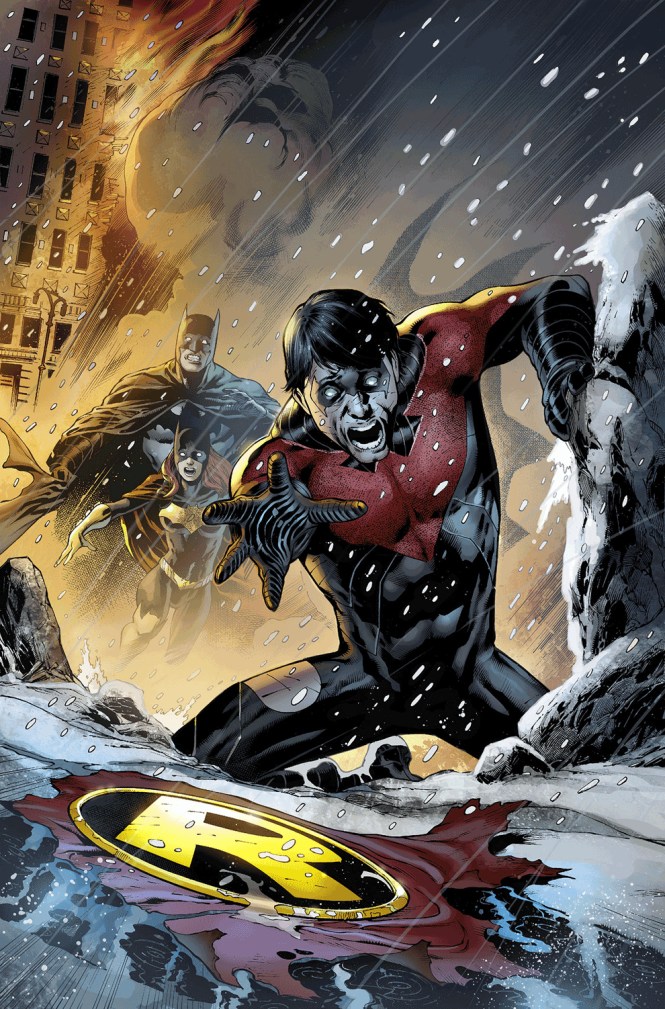 Dick deals with the grief of Damian’s death, while facing the Dealer, who has stolen Dick’s father’s uniform. After coming to terms with his own decisions, Dick decides to start mending some of his bridges, starting with Sonia. In an effort to gain Dick’s trust, Sonia reveals that her father is alive.

The Review
I think the portrayal of Dick’s grief took up the proper amount of room in this issue. I liked how the video game mentioned last chapter was brought back as a device to force Dick to confront his grief again. Ultimately the issue of Dick’s becoming a darker character was dealt with when the issue of the Dealer was resolved, though the reveal at the end of the issue has me in two minds.

One of the problems with characters that have been around for so long is that there will be some inevitable repetition of themes and events. After all, when certain major events contribute to the development of a character, then it stands to reason that said events will come back to haunt the character.

Where I have a problem is the reintroduction of Tony Zucco as an antagonist. Not to seem dismissive or anything, but hasn’t this plot thread been examined before? Many, many times? Sure this is a good source of conflict for Dick’s character. But it is possible to introduce new conflict, we really don’t need to go back to the well this often.

One of the reasons I like the Court of Owls story is that it introduced a new set of antagonists, dug deep into the history of Gotham, and managed to find a way to involve Bruce on an emotional level that didn’t require bringing back old characters in awkward ways. It had all the hallmarks of a classic Batman story, while still being fresh and interesting. It dug into the past as much as necessary, without copying past stories or bringing back resolved plot threads.

Who knows, this story could turn out just fine. And I imagine it probably will, Kyle Higgins has proven himself to be a skilled writer. But I can’t deny that this development has raised some warning flags. I’ll retain my judgement until I see where we’re actually going with this. But I’d be lying if I didn’t say I was worried.

Also, what’s up with Batgirl being on the cover, but then not making an appearance in the book? I know this isn’t uncommon in comics, but still, I was hoping she would be making a guest appearance. You know, perhaps carrying over from the aborted phone call in her own book?