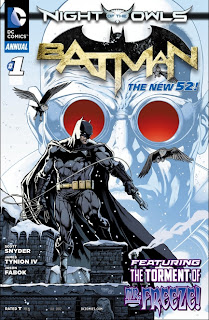 Mr Freeze talks to a psychiatrist in Arkham, about an accident his mother had. He breaks out of the asylum, and after getting his gear from the Penguin he goes back to his old lab in Wayne Tower. His backstory is rewritten to have him working for Bruce, while trying to find a cure for his wife. But Bruce pulled the plug on the experiment. After a confrontation with Nightwing and Robin, Freeze goes to Bruce’s office, where he finds his wife waiting for him.

Batman fights Freeze, revealing that Nora is not Freeze’s wife, that she was actually from decades before Freeze started his research. Freeze became obsessed with her, because of her frozen state, the only thing he was ever interested in being the cold.

The issue ends with young Victor dumping his sick mother into the frozen lake.

The Review
I was always a big fan of Mr Freeze’s story from tha animated series. The tragic story that spanned through the series was always a favorite. Seeing Snyder and Tynion change Freeze’s past to have Bruce be the business man that shut Freeze down was an odd choice when I first read it. I wasn’t sure how I felt about Bruce being the antagonist in the story. However, the latter reveal that Nora was never Freeze’s wife helps that decision work.

The problem is that I’m not so big on that reveal. It emphasizes Freeze’s mania, but it steals the pathos the animated series built for him. Though Bruce had better reasons for shutting the research down than the businessman from the cartoon did. I still prefered the romanticized version of Mr Freeze’s story over what we got here.

Though, considered on its own, I very much enjoyed this issue. While it’s a little more costly than the average issue, it did feature a complete story. Perhaps it’s not having to wait months on end for the complete story that’s causing me to give this more credit than it deserves, but for what it is Batman Annual 001 is a concise, enjoyable story.

I particularly enjoyed the scene with Penguin. I like seeing Batman’s rogue gallery interact, especially when they were on good terms. It’s a strange kind of friendship between the two of them, and reminded me of a more villanous version of Nite Owl and Rorschach’s relationship.

The art was quite good, though I’m confused by the sleeveless suit. How exactly does exposing his arms to the air help keep Freeze cool? I know that the design is meant to looke cool rather than functional, but really? Are we channeling the spirit of the 90s here?

The only other complaint I have about the art is the scene where Freeze uses the hose to freeze the guards. The way it’s drawn I first thought that the water was meant to be ice. So when I saw him drinking it I was confused. Also, if it’s cold enough for the water to freeze them, how did it not freeze in the pipe?

Overall a worthwhile purchase. While the price tag may be a bit much for some, Batman Annual 001 is an enjoyable story that can be enjoyed all at once, rather than spread out over several months. An interesting take on Freeze’s story, not my favorite, but not horrible either. A palatable comic.