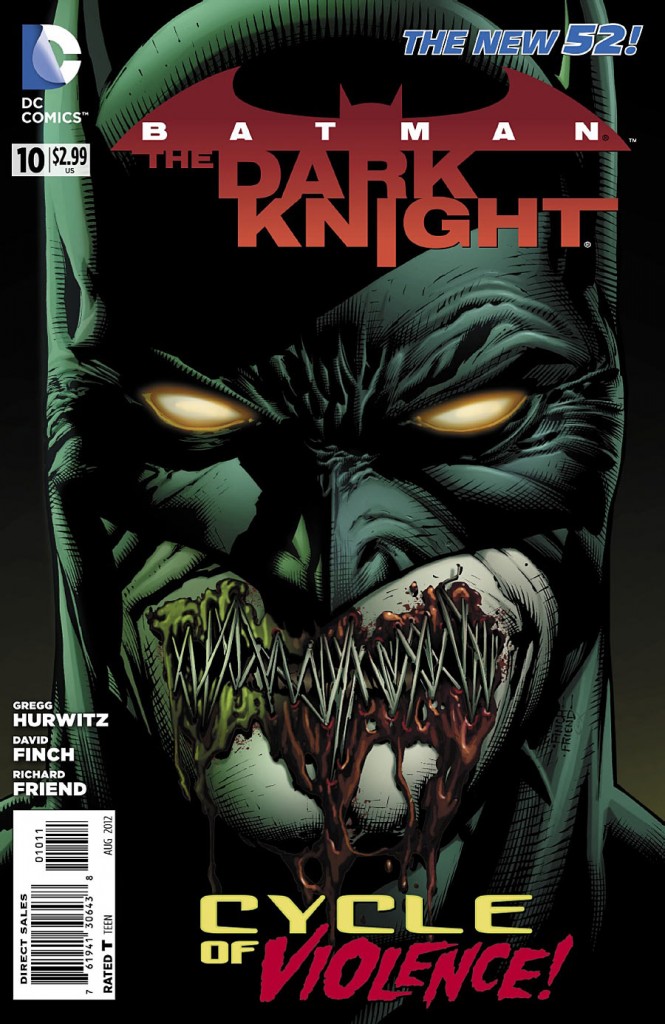 Batman and the police are tracking a criminal that has been kidnapping children, and though he releases them, they return mentally changed. Batman tries to find out who is responsible for the kidnappings from the most recent victim, but the child is too traumatized. In a rare and touching scene, Batman sits with the little girl and comforts her.

After this touching scene we get a jarring shift where Bruce is shown neglecting not only Damian, but his current girlfriend as well. He’s played off as clueless to his neglect, which conflicts with his development in Batman and Robin.

Gordon in the meanwhile is haunted by his inability to protect his daughter from the Joker, or to protect his son from himself. He’s attacked, in his own home, by the scarecrow, who’s upped the horror ante and sewn his lips closed, while somehow retaining his abilitiy to speak.

The Review
Some have wondered why the New 52 needed so many Batman books, to which I say, “Screw you guys, it’s more Batman. How can anyone complain about that?”

Well, they could complain because along with Detective Comics, The Dark Knight wasn’t very good. I didn’t read either of those comics myself, since I relied on reviews  before deciding which books to start off with, so I can’t really comment on their quality. I only picked up this issue because of the majorly positive reviews I was reading. With the change in creative team it seems that The Dark Knight is finally a good book. So I can finally stand by my opinion that more Batman is a good thing.

Normally I’m not a fan of excessive gore, or any gore at all, so after my first glimpses of the cover I was afraid that would turn me off from the book. But while the image of Batman with his mouth sewn shut is very striking, it doesn’t quite strike me as excessively gruesome. The biggest problem is that the blood looks less like actual blood, and more like Batman has paste smeared on his lips.

The book itself is great. While I have to roll my eyes at the pages focusing on Bruce’s girlfriend–we all know she’s not going to stick around, so no matter how good her story is, there’s a sense of futility to it–and I don’t quite like the page with Damian (it seems to go counter to the development between the two of them in the first ten issues of Batman and Robin), I still loved everything else. The Scarecrow is necessarily creepy, the scene between Batman and the little girl was wonderful, and Gordon’s characterization was spot on as far as I’m concerned.

Though, as a new reader, I’m a little curious to see where this book goes. To be honest, as much as I love all Batman all the time I can’t help but wonder what the purpose of this series is. Batman is of course about Batman, Batman and Robin is about him and his relationship with Damian, Detective Comics is for stories that focus on actual detective work (whether it actually does that is debatable), but what is The Dark Knight‘s place in this world?

If it’s just being another quality Batman book, then I don’t think I could really complain. And if they’re more mature, dark, and gruesome stories, then I definitely won’t complain.