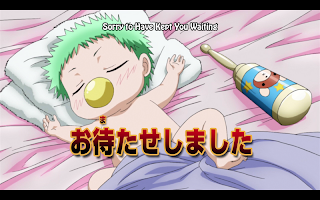 The three demons that attacked Oga and Hilda are shown to be imprisoned for their failure, but they are freed to finish the job. En refuses to admit defeat and keeps challenging the Ishiyama students to rematches. When Furuichi realizes that En has a thing for Lamia, he sends a message pretending to be her. This gets a response, but he blows it when he sends a message as himself asking where En is. 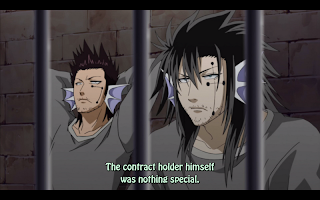 On their way back from the convenience store, they run into Lamia, who flees from them, and ends up in the exact same building, on the exact same floor, in the room right next to them.  After an awkward several minutes between them, Furuichi tries to leave, but they refuse to let him go. 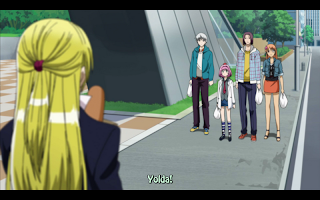 Aoi practices her sword style against a giant boulder, assumedly practicing what she learned from the person she met in the inner temple. When the rest of the group notice that Furuichi is missing, Himekawa comes in, having discovered where En’s IP is coming from. But when they open the room, they find it empty. Lamia tells Furuichi that Yolda is an interdimensional transference demon, and that she created a pocket dimension for them. 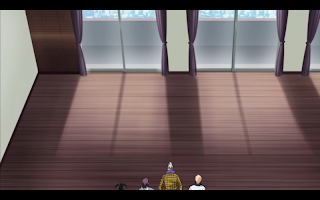 Hilda transfers herself into the dimension, using a new technique that Alaindellon created, to move through the communication device’s signal. She beats Yolda, and the other two maids easily. Once Yolda is knocked out a portal starts to open into the room, letting a squad of En’s men into the human world with them. 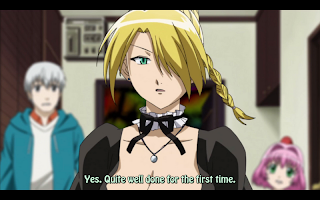 Hilda knocks the loudest of them through the ceilings, and follows them up. The Ishiyama guys come into the room, where two demons remain, while Nene calls Aoi to get her to come. Aoi tries to think of a way to make it there in time. She finds Angelica, who was with her father, who was training at the temple. 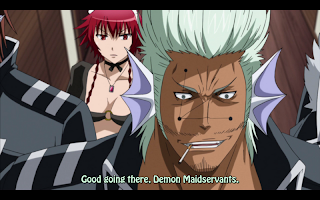 Hilda faces off with the three from before, when Oga appears, having finished his training off-screen, and wielding Alaindellon like a club. 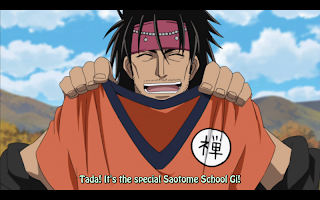 My Opinion
This episode continues my theory of contrasting seriousness and humor. This episode is easily one of the more serious episodes. The first half or quarter is still funny, with Furuichi and Lamia discovering where En and his maids have been hiding the whole time. This immediately becomes serious as they realize they are trapped in a room with three very touchy demon nurse maids.

The rest of the episode continues to be what I like to call “badass Beelzebub“, with Hilda showing up to save the day, and more of En’s demons coming to join the fight. So much of the episode is played straight that the climax of the episode is an especially strong punch to the comedy nuts.

Even when it’s being serious, Beelzebub cannot help but be ridiculous. 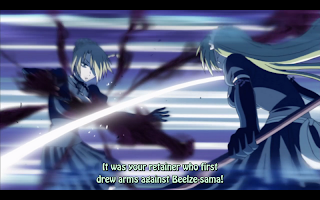 Oga’s training arc was especially well done, in that it doesn’t get much focus after the initial few scenes. Beelzebub knows what it is, and a traditional shonen fighter it is not. So no extended training arcs. So any big Bleach and Naruto fans must be having withdrawals right about now. 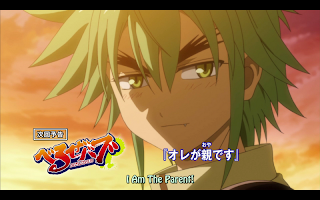