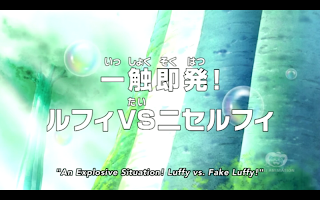 Introduction
At the time I watched it, this episode did not frustrate me. But thinking back on it I realized that the pacing in some of these episodes really does get pretty bad. Which is a shame, because it overshadows some otherwise pretty awesome moments.

Plot Summary
Luffy flashes back to leaving Hancock’s ship, along with a pack filled with more than even the most conscientious wife would bother packing.

Fake Luffy and his crew continue to ask for the upcoming beating, while all the bystanders urge Luffy to apologize. Sanji meets Rayleigh and Shakky in Shakky’s bar, where a beat up Duval tries to explain how hard the two year long fight was for him. Chopper runs into the fake Sanji, Zoro, and Robin, and somehow manages to confuse them for his friends.

Luffy apologizes to the fakes, and keeps going, knocking them over again. Fake Luffy shoots at Luffy, who dodges (not that he really needed to), and knocks them out with haki. In the meanwhile, the fake Zoro and Sanji realize who Chopper is and try to get him to go with them. Before they can return to their crew, Fake Robin gets kidnapped by Government officials. 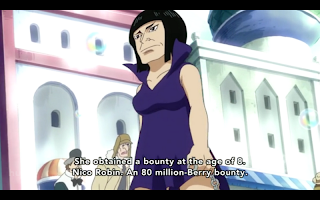 Zoro finally gets his big introduction when Sanji finds out that he climbed onto a pirate ship, wanting to fish. The ship resurfaces, cut in half, with Zoro declaring that he got onto the wrong ship. 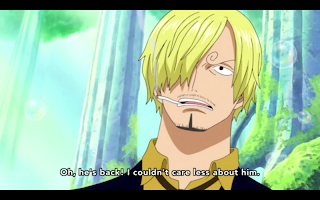 My Opinion
If there is one complaint I have about anime in general, it’s that series based on ongoing manga have pacing problems. Sometimes this is more egregious in other series, but One Piece does tends to waver between good and bad pacing. 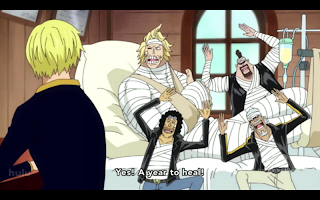 This episode felt less like a complete episode, and more like a continuation of the vignettes involving individual characters. Which isn’t in itself bad, just very different from the western style of storytelling. Because the episode switched between characters, the slower pace was very much tolerable. A slow pace focusing on one single character is unbearable, while a slow pace switching between characters spreads out the drag a little more.

Overall this works well for the anime, allowing it to stay well ahead of the current manga chapter, by stretching out the episodes where they can. On their own One Piece episodes aren’t necessarily the most fulfilling thing to watch, but watching several in a row, as I often do, makes for a very rewarding experience.

Where it doesn’t work, however, is when scenes are dragged on far beyond their expiration date. I’m going to assume most Japanese people are more patient than your average non-Japanese. If this is not the case, then I’m legitimately confused as to why the scene with Fake Luffy threatening real Luffy got dragged out for so long. There’s only so much repetition that should be allowed in any given show.

Also, I just thought I’d mention, one of the first ads I saw was for the new Naruto: Bonds movie. While I can’t stand the Naruto anime, I am somewhat intrigued by this new movie. Mostly because I would like to find out who decided it would be a good idea to center a movie around the franchise’s most hated character?

All other interest immediately waned after I realized the movie wasn’t going to be about bondage. 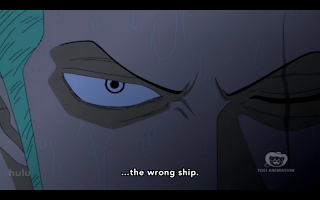