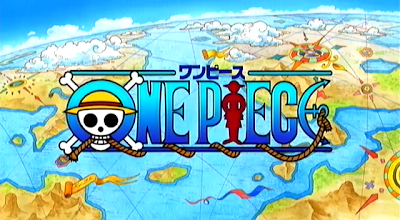 Obviously I can’t review every episode of the One Piece anime before the time skip starts. And even reviewing it in chunks would take too long. So instead I’m going to write a short retrospective article about my experience with One Piece.

The first time I came in contact with One Piece was back when I still lived in Geneva, Switzerland. The anime and manga shop I frequented had a poster with Luffy, Nami, and Usopp on it. My first reaction was, “What’s up with that guy’s nose? This looks weird.” And then I forgot about it.

I think everyone that’s ever loved One Piece had that same first reaction.

It wasn’t until we moved into our second home in Switzerland that I started watching afternoon cartoons (read: anime) on the German channel RTL 2. This is where I first watched Ranma 1/2, and Case Closed (though for us it was called Detective Conan). MTV also aired some late night anime, so I watched Vision of Escaflowne, and Cowboy Bebop, among others.

When One Piece started airing on RTL 2, I remembered it from the poster, but since it was taking the time slot of a show I had been watching, I saw no reason not to watch.

Since it’s been several years since then, I can’t exactly remember what drew me in about the show. Either way I loved watching a new episode every day. Until we reached the middle of the Alabasta arc, and for some reason they started airing the show from the very first episode again. After that I still watched it, but never got beyond Alabasta. I ordered the comics from Amazon.de to finish the story, but thought the art looked far too cramped.

I left the series alone for a few years after that, until I got to college. During freshman year I found out about manga scanlation sites, and started reading a ton of other manga. Such as Bleach, Naruto, and—finally—One Piece.

Even though I liked the anime more than I did the manga, reading through the whole series had me hooked. I was in love with the manga, and it was time to start watching the anime again. And watch it I did. It took me several days, and I skipped a lot of the filler, but I finally managed to catch up.

Since first getting into anime I’ve become more of a manga fan. I prefer manga mainly because it’s the original version. It’s the story the creator wanted to tell in the first place, without all the fluff the anime adds.

With One Piece I have to confess that while I still love the anime, the manga is superior. Especially in certain arcs where there is too much padding for my taste. Though, out of all the anime in the world, One Piece is among those rare few that can pull off filler that doesn’t make you want to gouge your eyes out. I consider it an effect of the original product being superior, and the anime’s creative team’s dedication to the series.

From the very beginning to the current episodes, One Piece has been an important part of my life as an anime and manga fan. And even when I eventually tire of current shows, I will always be a One Piece fan. Because a good story transcends medium, and good characters shine through the superficial trappings of the genre.

And if you can show me any other series where I cried about the demise of an inanimate object, then please, point me in its direction.

Show your One Piece love. Watch the show at OnePieceOfficial.com