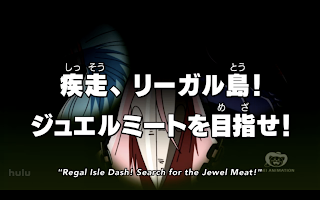 Toriko and Rin find themselves surrounded by a horde of monsters.  With Toriko still injured from his fight in the coliseum he can’t go on much longer.  When the strongest opponent so far arrives, an obasaurus owned by one of the GT robots, Toriko has no choice but to ask Rin to spray him with the Battle Fragrance. 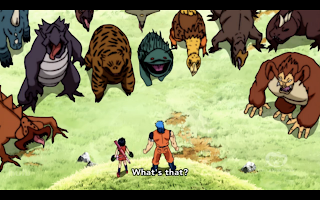 In the meanwhile Komatsu and Sunny are busy getting out of the Mushroom Forest, and then crossing a marsh.  While traveling over the water using Sunny’s feelers and the surface tension of the water, Sunny explains to Komatsu about the gourmet cells.  Apparently they are cells that when combined with other cells enhance those cells’ properties.  So they can make food tastier, and humans superhuman.  He tells Komatsu that besides the Four Heavenly Kings, Mansam and Rin have the cells injected into them.  Which is honestly kind of surprising, consider that Rin hasn’t shown any superhuman abilities.  But maybe it’s unfair to compare her to main character monsters like Toriko. 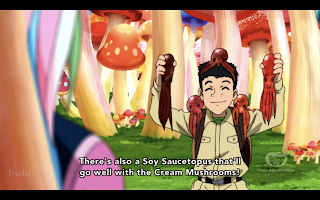 At the same time Tina, who has once again been removed from the plot, runs across the grey GT robot.  Terry senses its threat, and runs away, with Tina on his back.  They go off to find Toriko. 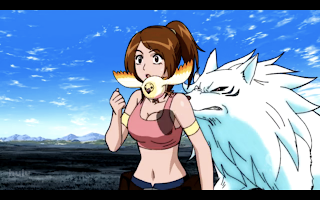 Much like Fairy Tail this week’s Toriko does a good job of splitting focus between different characters to keep the pace going.  Granted things like Toriko fighting are more exciting than Komatsu cooking mushrooms, but at the same time it helps that the slower part of the episode is used to provide some interesting exposition. 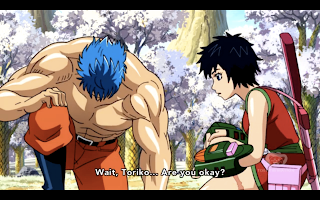 Mansam also gets his time in the spotlight as he explains the jewel meat, and how it can actually regrow in the mammoth after being harvested.  So not only is it the best meat ever, but it can also be harvested without harming the animal?  Wow, that’s a win-win right there if I ever saw one.  Also, we finally see a handsome joke that is actually legitimately funny.  So it’s a true win-win. 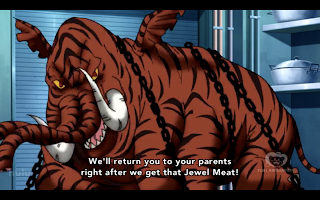 I might be wrong, but I don’t think I am, but I get the feeling that Mansam’s voice actor is also the narrator.  Which if he is, then awesome because I love that voice.  He can make even the silliest opening narration seem completely legitimate. 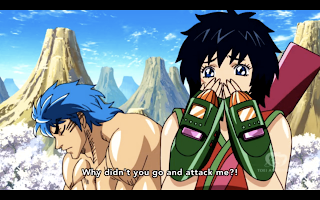 I think in the future I will use this as a yardstick for what a good Toriko episode is.  If every episode after this goes no lower than this one, then Toriko will be a great series indeed.  Also, you may notice the video right after this review.  I’ve recently discovered that Hulu allows me to embed videos in my posts.  So for convenience sake, if anyone feels inclined to watch the episode right after hearing how amazing it is, then they don’t even have to bother clicking on the link I will still provide.  Just scroll down and start that video playing. 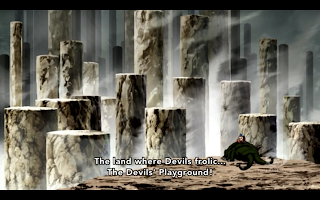