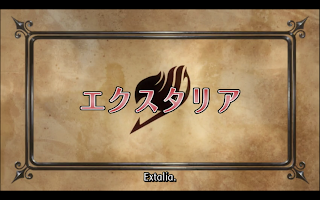 Natsu and Wendy are thrown into jail, while Lucy is scheduled for execution because the kingdom has no need for her.  In the meanwhile the two Gajeels work together to figure out a way to get earthland Gajeel up to the crystal.  At the same time Happy and Charle wake up in Extalia, the kingdom of their own kind the Exceed.  There they learn that they were sent to earthland with the mission to assassinate the dragon slayers, but the order was remotely changed to lead the dragon slayers to Edolas.  The episode ends with Happy angrily declaring that they aren’t the Exceeds’ puppets, and Charle calling Happy by his real name for the first time. 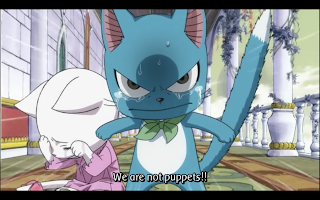 As if seeing an entire country of anthropomorphic cats wasn’t enough, turns out they’re a bunch of genocidal assholes.  Interesting twist there.  On the one hand it’s impossible to take them seriously, because they’re all cutesy talking cats… 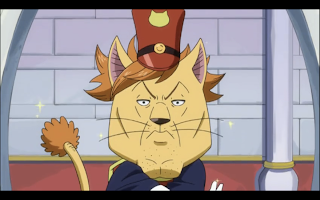 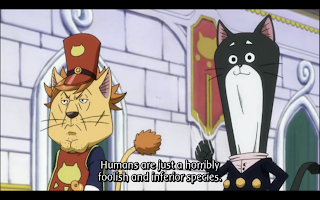 The episode cuts between the Happy and Charle main plot, to the Gajeel and Natsu side plots fairly regularly to give the episode a good consistent flow that didn’t bog down in any specific storyline.  So while the individual story lines aren’t the most exciting in Fairy Tail history, this allows for the episode to not feel slow in any way. 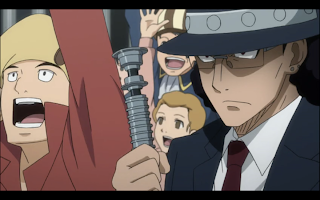 The reveal that Happy and Charle are actually interdimensional assassins, while essentially ludicrous (could anyone seriously think either of them could take on even the weakest of dragonslayers (ie/ Wendy)?) is milking the characters for more pathos than I would have thought possible.  Who knew two fuzzballs could actually come close to making me feel something?  Who knew indeed… 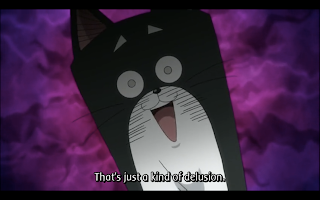 It’s always a shame when the anime version of a scene from the manga doesn’t quite live up to its original.  Maybe it was because I knew it was coming, and in the manga it was unexpected, but Natsu’s reaction to hearing about Lucy being executed wasn’t quite as intense as it was in the manga.  Maybe it’s just another thing to chalk up to my overall theory of manga being better than anime (I call it my Fanboy Theory), or maybe I was just expecting too much. 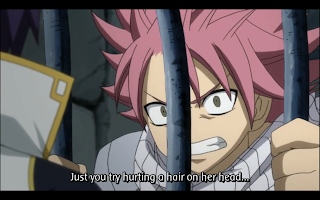 Overall this is a solid episode, and while it does not really have any standout moments of excellence, it balances that out by being consistent in quality and pacing. 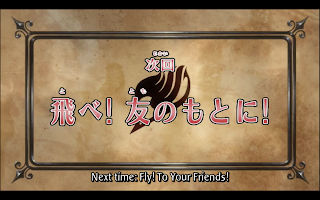