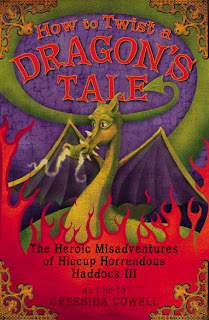 If the movie hadn’t established a completely different setting from the books, I would say that this book would make a great sequel. In fact, I’ll stand by that. With the right changes this book would make the perfect sequel to the summer blockbuster How to Train Your Dragon. Sure it’s written for younger kids, but it has everything that a good movie needs. Danger, heroes, and a threat that could destroy the world unless it’s stopped.

When Hiccup and the other vikings in training are learning how to herd reindeer from their riding dragons, they are attacked by pack of Exterminators, a vicious kind of dragon with large claws on their front paws, who can not only survive in fire, but thrive in it. They are quickly surrounded by the Exterminators’ fire, and are only saved at the last minute thanks to the intervention of Humongously Hotshot, the greatest contemporary hero.

Hiccup discovers that there are hundreds of thousands of Exterminators waiting to hatch on the island of the Lava Louts, and that the only way to stop this from happening is to return the Firestone that Hiccup’s own father had stolen many years ago to woo Hiccup’s mother. If they don’t, the Exterminators will hatch, and cover the world in flames. Hiccup, along with his friends Fishlegs, and Camicazi, with the help of Hotshot, set out to return the Firestone to the volcano, where an old foe awaits Hiccup.

There’s a surprising emotional depth to this story. Sure my summary makes it sound like it’s a fast paced action story, which it is of course. But there are certain moments, in Hotshot’s backstory, and the epilogue, that are much sadder than I expected from a book of this series. It’s books like this, that aren’t afraid to throw in some sad moments, without dumbing it down for the kids, that are the kind of series children need. Some things don’t have a happy ending, and sometimes the way things are may not seem fair, but it’s the way things are and doesn’t necessarily need changing.

How to Twist a Dragon’s Tale is an excellent continuation of the Hiccup series. For older readers it’s a quick read, and a very insightful way into how children’s literature should be written. For children it’s a fun read that is very much within the reading level of younger readers.

So if you want to learn how to write Middlegrade, or if you don’t care about age recommendation for books (I read adults novels when I was a kid, now I’m just working the other way around), or if you have kids that don’t read enough, or read plenty and want another series to read, you can’t go wrong with the How to Train Your Dragon series.

If you liked my review, buy the book here:
How to Twist a Dragon’s Tale (Paperback)

How to Twist a Dragon’s Tale (Hardcover)

How to Twist a Dragon’s Tale (Audiobook)