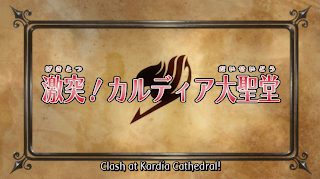 Watch the Show Here!
With the Raijinshu taken out, all that remains to be taken care of is Laxus and the Thunder Hall. Poluchka comes to take a look at Makarov, and tells Levi, who has remained behind to take care of the Master and Bisca, to bring Laxus, as Makarov doesn’t have long left to live. Suddenly things seem even more serious. Enjoy it while it lasts, and don’t forget what I’ve said about Fairy Tail being a safe series. 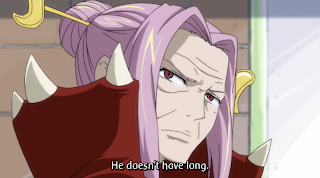 A flashback reveals part of why Laxus is so angry at his grandfather. Makarov expelled his son, Laxus’ dad, from the guild for reasons not explained. His son’s name happens to be Ivan, which means that the person Gajeel was talking to is possibly Makarov’s son. 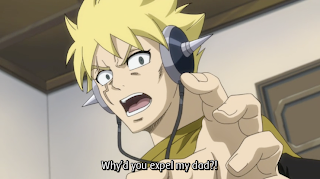 Mystogan manages to find Laxus, who reveals that he knows Mystogan’s real name, almost calling him by that name. Mystogan attacks him before Laxus can reveal his real name. 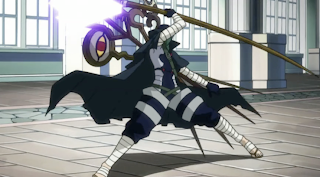 You will not spoil this for the viewers! 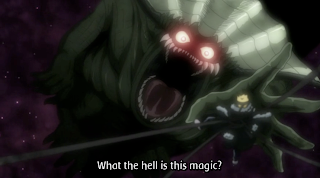 That turns out to be an illusion he cast to distract Laxus from his real attack, what looks like a powerful sleeping spell. I’ll be honest, the first time around sleeping magic doesn’t seem like it’s as potent as lightning or fire magic. But you know, if all you want is to incapacitate your enemies, not kill them, you can’t get much better than sleep magic. If you put your enemy to sleep, and keep them down long enough, you’ve won. So really this is a good strategy. 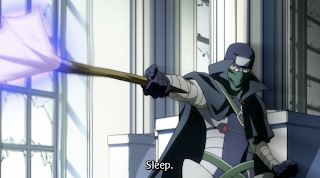 Laxus of course manages to break free and the two of them fight.

Natsu and Erza show up on the scene, having been able to find Laxus’ location by the noise the fight was making. Mystogan is distracted by seeing Erza, and if you didn’t already see what’s coming next you’re an idiot. Laxus uses Mystogan’s distraction to blast off Mystogan’s mask, revealing his real identity. Jellal! 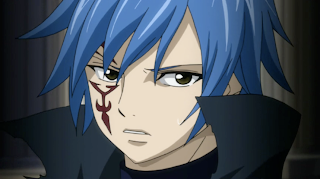 Only not, according to him at least, and he leaves before explaining why he looks exactly like their old enemy. So instead of three against one, which would give them better odds, it leaves Erza and Natsu to fight Laxus. Lame. 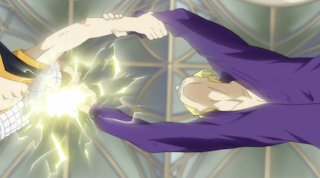 Erza shoves Natsu out of the way and attacks Laxus, but after discovering what the things floating in the sky are she leaves the fight to Natsu and goes to destroy the thunder lachryma. So soon after she sacrificed herself to save her friends, Natsu makes her promise that she’ll come back alive. 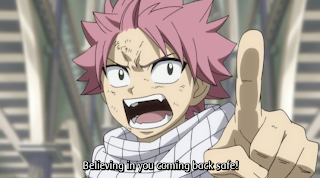 While Erza is trying to summon enough blades to destroy all the thunder lachryma, in her heart she asks her friends to lend her their strength. Somehow Gray and Lucy hear this. 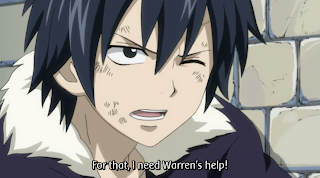 You’re watching a show about magic. Try not to ask too many questions.

Gray, realizing what is going on goes to find Warren, in order to contact everyone else. See? Told you he’d be important. 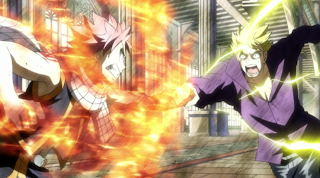 Laxus beats up on Natsu, while at the same time dropping hints that he doesn’t really want to see the town destroyed, as he wonders how long Makarov will take to surrender, and that there is little time left. Natsu tells him that he realizes Laxus doesn’t really want to destroy the town, and because this is most likely true, it just serves to piss Laxus off all that much more. 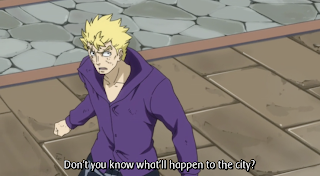 The episode ends with Erza continuing to summon blades, and surprisingly the ending theme is still the most appropriate they’ve ever had, adding a slightly melancholy, yet upbeat feeling to the end of the episode. 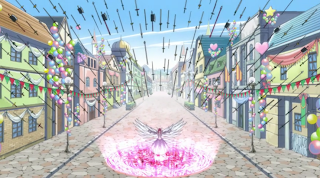 This is a fairly fast paced episode, that really doesn’t stand out much otherwise. It starts to move us into the final confrontation, so the climax should be in the next episode, with the finale and wind down in episode 48. There really isn’t much to say about this episode, other than that it’s a good episode, but doesn’t stand out to me as much as the previous episode. It moves the plot along to the climax which I am looking forward to. 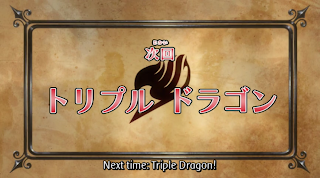