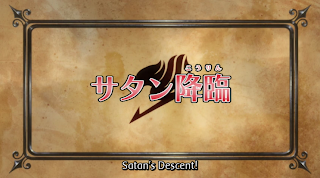 Watch the Show Here!
Lucy’s fight continues from the previous episode. Not much to comment on here, other than that it’s a pretty fun fight, as most of Lucy’s fights are, since it’s not the typical style of shonen action sequence. Though I do want to point out that five of Bisclow’s dolls are some old Mashima characters from a series that he was writing at the same time as Fairy Tail, called Monster Soul. 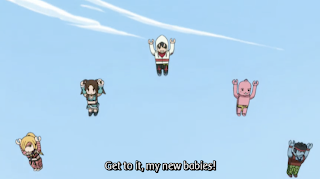 Unfortunately, for those that haven’t heard of it and are excited to go and read more Mashima Manga, Monster Soul did not last long, and for good reason. It’s quite clear that all of Mashima’s creative energy went into Fairy Tail, and Monster Soul suffered for it. It was a fun concept, and had promise, and the characters were decent, if nothing amazing, but as Fairy Tail increased in popularity Monster Soul kept going downhill, until it was canceled, and ended with a rushed finale. So it has an ending, unlike Zombie Powder, but it’s such a rushed and unsatisfying ending that if you start to get into the series anyway you’ll be sorely disappointed at the end. I have to say though, I’m glad that out of the two of them Fairy Tail was the more popular.

Lucy manages to attack Bisclow directly, but he reveals his secondary attack, Figure Eyes. It’s an attack that turns anyone that looks into his eyes into dolls under his control. Loke tells Lucy to close her eyes in time, and they only manage to win because of Loke’s powered up attack, and his increased strength after returning to the Spirit Realm and recharging his spiritual batteries. 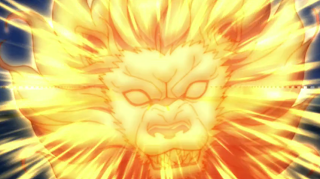 Levy manages to solve the runes, and gets Natsu and Gajeel out of the guild. The two of them rush off to find Laxus and lay the beat down on him.

Mira finds Elfman, who is just waking up. She appologizes for not helping at all, here and during the Phantom attack on their guild. Elfman tells her that she doesn’t need to cry or be sorry about not being a fighter, that all she needs to do is greet everyone with a smile. Now people could portray Mira as an “anti-feminist” weak female character who can’t do anything but cry, etc, etc. Well, if you thought that, and ignored the fact that she is slightly traumatized after seeing her berserk brother murder their sister, then the end of this episode is going to make you eat your words.

Cana and Juvia chase Freed, who manages to trap them in one of his rune traps. The condition of the enchantment is that they can’t leave until one of them can’t fight. Freed declares that he will take on the winner. He calls Juvia “Phantom woman” declaring that he doesn’t consider her a part of the guild. Juvia, visible hurt by the attack, looks like she’s about to attack Cana and reveal her true colors. But instead she uses the walls of the runes to bounce up to the thunder lachryma, which she attacks, rendering herself unable to fight, and freeing Cana.

This scene is one of the reasons I love this episode so much. It establishes Juvia as more than just a Gray Fangirl, by giving her motivations for wanting to be part of Fairy Tail other than that it’s where Gray is. Fairy Tail made her feel welcome, and it’s because of this that her gratitude drives her to sacrifice herself rather than hurt one of her comrades. Of course she isn’t really dead, so the emotional aspect is dulled a little bit. But this part of the episode appeals to the sappy emotional part of me. I cried more during this episode than the entire series combined. I think. 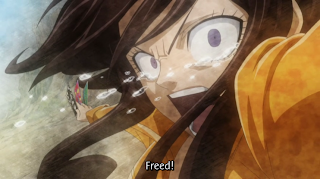 While Natsu continues to look for Laxus, Gajeel is found to be talking to a mysterious individual, named Master Ivan, who does not appear to have Fairy Tail’s best interests at heart. When I read this in the manga a while back, I remember being disappointed, because while he was a pretty big jerk, Gajeel was still fun to have around as a character, and then it turned out that he was still an enemy. Fortunately the issue is resolved by the end of this storyline, which frankly I thought could have been dragged on for a bit longer for some more suspense, but instead Mashima decided to resolve the issue early on, making the series a very “safe” one to get in to. If nothing else Fairy Tail is a series that focuses on the fun, which really doesn’t make it the best series for people that like suspense and gripping storytelling. But if you like reading something that knows how to have fun, and yet remain gripping at times, then this really is the series for you. 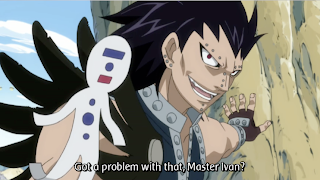 Mira and Elfman find Cana fighting Freed. Freed beats Cana easily, and Elfman jumps in to fight him, but is beaten just as easily. Freed uses his magic to repeatedly cast suffering magic on Elfman, and just as he is about to cast a death curse on him, Mira snaps and unlocks her sealed magic to defend her brother. 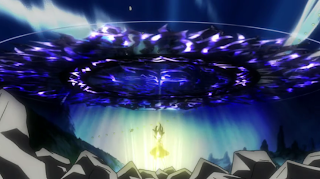 This is where things get really awesome, as Mira proceeds to wipe the floor with Freed, no matter what he tries. The entire series we’ve been hearing that she used to be an S Class mage, but we’ve never seen exactly how powerful she is. Seeing her magic, Demon Takeover, is surprising as it is at complete odds with her sweet, caring personality. It’s never explicitly explained, but from what I’ve gathered, Mira’s current personality is a kind of defense mechanism to her sister Lisanna dying. My theory is that she was unable to use her magic, or act like her old self – which, I might add, fit the demon magic a lot more – because she felt guilty that she was unable to do anything to save her sister. Her magic and old personality remind her of her failure to save her sister, so she abandoned them.

I think it’s important to note though, that while Mira unlocks her power, she retains her current personality, which I think is interesting, as it shows that it isn’t a case of her hiding her real personality, but that she really did change as a person, becoming the kind motherly person that she is now. One of the more radical examples of character change, but it works.

After Mira beats Freed, who is unable to do anything despite taking on his own demon form, she returns to her old self, and one friendship speech later Freed has admitted the errors of his ways and turned back into a good guy. It was a good friendship speech though.

Overall this episode got a strong emotional response from me. I’ll admit, I’ve been getting more open about crying during a movie, or TV show, but for there to be two crying scenes for me during an episode, one of them a friendship speech no less, and then the Mira transformation scene that gave me the chills. I’d say this episode is one of my favorites, and one of those rare ones that I can watch several times.

For the past few months I’ve been worried about the rate at which the anime is burning through the manga chapters. My biggest fears being that the series will either be ruined by filler, or end before the manga ends. According to Wikipedia though, Fairy Tail has proven to be so popular that it will be getting a second season. Not only that, but the English speaking Animax has announced that it will be airing Fairy Tail starting at the end of this month. Whether this means it will be getting an English Dub, or whether they’ll just be airing the Subbed episodes, has yet to be revealed, but if there is an English Dub, rest assured that I will be letting you know whether it is any good. Since Animax isn’t an American company, I don’t know what this means for the DVDs being licensed for the States. Eventually I hope that Funimation picks up the series, but we’ll have to see.

About the second season though, personally I have a few theories about how they will pull this off. At the end of this arc there are only two more arcs to go, with a third one starting up soon. At the pace the anime has been going, it would not take them long to catch up on the manga. In order to extend the series I imagine that season two would most likely be entirely filler, or have heavy amounts of filler. Now personally I don’t like filler, but if done right I think the filler route would be right for them. Especially if they want to continue making this series until the end of the manga. Personally I think the best course of action would be a little original filler, but the majority should be filler from the omake or extra chapters, or specials to buy themselves some time.

Though to be honest, if they hadn’t been renewed for a second season, I have to admit, this storyline would be a great place to end. Granted there is still so much more that they can go into, but they could have chosen worse than the Battle of Fairy Tail arc to end the series on. I know that I mentioned this before, that this would be a great place to stop, as beyond this story arc there would be far too many new elements introduced to give the series a satisfactory ending. So I have to applaud the planning that went into this.

That being said, I’m thrilled that the series will continue into a second season. I could easily see this being one of the big ones, along with One Piece, Naruto, and Bleach. I can easily see them using filler to give Mashima time to get further ahead, and while filler is a gamble that has ruined other series, I would be satisfied to see a few episodes of filler and then end the second season with the next official canon story. From what I’ve been able to gather the second season will be much shorter than the first, which seems wise, as they can’t be certain that the series will continue past that second season, so they don’t want to get to the point where they can’t end the series satisfactorily since it’s been canceled.

And even if we get an onslaught of terrible filler, at least we’ll always have the first season almost completely filler free. Not a bad run if you ask me. 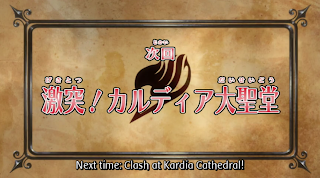