Wow. What an experience. As a first time Comic-con goer I wasn’t sure what to expect. I was thinking I’d probably spend a bit of money, get some free stuff. What I didn’t realize that with so much stuff to geek out over I would never have enough money, ever. I didn’t even find everything that I wanted in the first place.

When I first got to the con, I checked the schedule and saw that there was a panel with Stan Lee in it. If nothing else I wanted to see the man in the flesh at least once, that was one of my main goals for this convention. It was a pretty decent panel, though I wasn’t too interested in the project they were talking about, it was a series of animated graphic novels about the Holocaust, but at least it was fun to see him in real life. I got a few pictures, though most of them are horribly blurry. 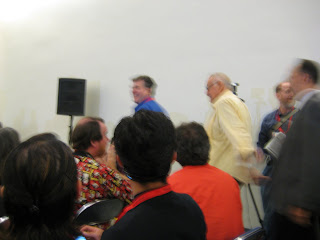 Unfortunately this was the clearest photo I managed to get of Stan Lee.

After that first panel I made my way down to the floor to look around at the booths, and wait for Raven. It took him a while to show up, but once he did we met at the Funimation booth and I bought one of the Con exclusive Fullmetal Alchemist: Brotherhood T-Shirts, and a thirty dollar grab bag. I got the first twelve episodes of Romeo x Juliet which I don’t really care about so much, but it’s still nothing I hate. I also got the first volume of the second season of One Piece, definitely loving that, and most importantly, the entire series box set of Samurai 7. Doesn’t get much better than that, unless of course they had replaced Romeo x Juliet with the second volume of season one of One Piece, and maybe replace the One Piece DVDs I did get with the third volume of season one, just to keep things in order. 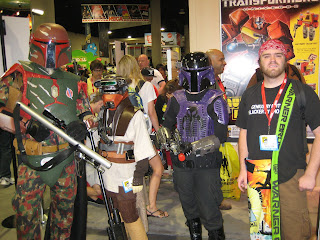 After that we made our way down to the Viz booth, to see if they had early copies of Bakuman available. They did. However, they also didn’t have any copies in the booth, instead we had to look all over the place for the book store booth that was selling the Shonen Jump material. Both me and Raven were able to get our hands on a copy of the manga, so be expecting a review of that soon. I was planning on writing the review the first week of August, when Bakuman is coming out. But since I got my hands on a copy early I’m going to write the review a bit sooner. Maybe. I’ve got a few books I need to get through as well. 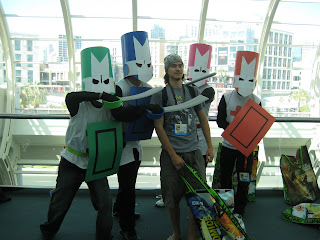 We stopped by the Girl Genius booth, which was a thrill for me, since I’m a big fan of the webcomic. I bought their second volume and got it signed. Saved myself three dollars that way. 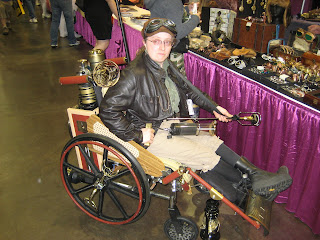 After we got some lunch we tried to go to some panels, but the lines were so insane, and by then Raven had to head home, so I wandered around the floor for a while, and got some more pictures. 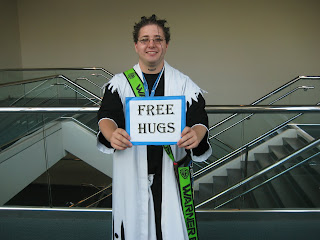 And then I was hugged…

Around six I got into the line for conference room twenty. I wasn’t about to miss what was happening in that room at eight. The line, while long, didn’t take as long to get through, and I sat through a panel with previews for several new shows coming out, two of which looked interesting, The Cape (?) was one that looked interesting because it was a superhero drama, there was another one that was a superhero drama, and a vampire one that looked uninteresting, and then another that I can’t remember the name of, but had decent acting. Look, don’t blame me for not having details, I was reading my copy of Bakuman by that point. 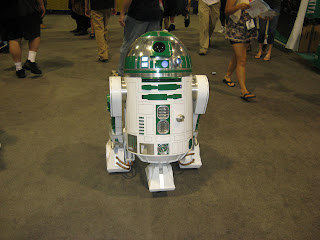 I don’t know if there was a midget, or a kid inside it, or if it was remote controlled. But it was moving.

Finally eight rolled around and we got to see what I’d stuck around so late for, the world premier of Batman: Under the Red Hood. First off, it was strange, seeing an animated Joker that didn’t have Mark Hamill’s voice. However, after the initial strangeness of it, John DiMaggio really owned the role, definitely living up to the actors that have portrayed the role before him. 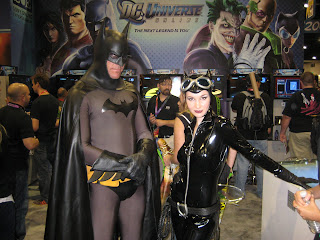 While there really wasn’t any surprise as far as the plot goes for me, since I already knew what happens before hand, this movie’s strength was definitely the heart. The characters were treated with the dignity they deserved, and the performances by the voice actors enforced this. Visually the movie was spectacular, and there were several moments worthy of applause. 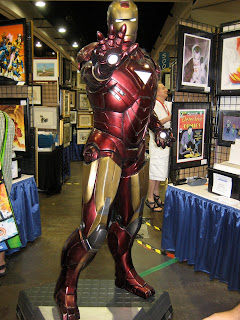 I won’t go into depth, as the movie is not out until Tuesday, and I want to avoid spoilers. However, it is available for rent, and I highly recommend that anyone reading this who likes Batman go out and buy the movie. They’re relying on DVD sales to continue producing such quality animated movies.

Well, that’s about all, except for the last little bit of news, the upcoming direct-to-DVD animated movies from DC:

The last one is especially thrilling for me, because it was the first Batman comic that I really read, and what hooked me on Batman.

Well, I guess that’s it.

Oh yeah, I talked to the Funimation booth about the status of Strong World. One of the booth workers said that they do not have the movie but it was only a matter of time, since it’s One Piece after all. And according to Funimation President and Founder Gen Fukunaga they are currently in the middle of negotiating the rights to the movie with Toei. Negotiations are going back and forth, said Fukunaga, and Toei aren’t the fastest of negotiators, so there is no clear answer to when we can expect a DVD release of Strong World. But with active negotiations occurring I think it is quite obvious that it is indeed only a matter of time before we have our own copy of Strong World.

Now I wish I’d had the presence of mind to ask them if they were going to be releasing any of the other One Piece movies within the near future, or if there are any plans for this. I wish even more that I’d realized who exactly I was talking to at the time. When I saw his name I remembered that he was someone high up in the company, but I didn’t realize he was not only the President, but also the founder! Oh well, if we don’t see any One Piece movie releases by next years Comic-Con I’ll be sure to approach President Fukunaga with these questions.

Well, I hope you enjoyed my post, and I’m definitely looking forward to going again next year. And now to end this with the most epic thing ever. 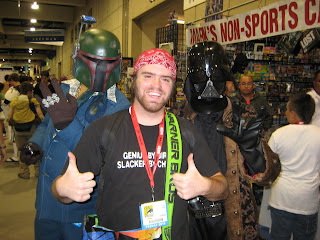