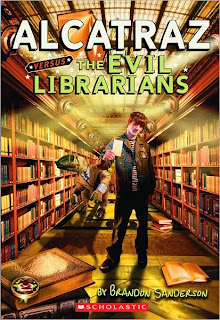 Alcatraz Versus The Evil Librarians is actually the second book of Brandon’s that I’ve read. I first read his very first novel Elantris, before I knew who he was. I’ll review Elantris at a later date, but needless to say after reading it, and figuring out that it was Brandon who was going to finish The Wheel of Time, and that he teaches a creative writing class at my school, I decided that I wanted to try out the rest of his books. I already knew that he could do Epic Fantasy, so I decided I’d find out if his YA books were any good (or is it middlegrade?).

Alcatraz Versus The Evil Librarians is about Alcatraz Smedry, and how he’s suddenly thrown into a world shaking conflict against a society of evil librarians. The premise is silly enough to make a good comedy, but what really sells this book is the fact that Sanderson actually manages to have it make sense. What really makes it click for me is the big plot twist of the book, where we realize that the series is set in the real world, but it’s unlike our world in a major way.

Obviously the tone is very different from Elantris, Alcatraz is written in first person, a trend that I’ve been noticing is very common in YA literature. While I’m not a huge fan of the viewpoint, I can see why it would be very effective for the genre. In Alcatraz’s case it is perfect for conveying Alcatraz’s personality, which in my opinion is both a positive and a negative thing.

For one, we get a good understanding of who Alcatraz is, which is a necessary strength of the book, as a lot of what makes it so good is the fact that Alcatraz is in a typical young adult story, where the stranger comes and tells you about your magical heritage, but he’s too sensible to do the stupid, and common thing, that most YA characters do, which is follow the obviously deranged person.

The downside is, and this is something that really bugged me, I don’t know how much it would bug other people, throughout the book Alcatraz repeatedly alludes to a tragic ending, which works for some, but not so much for me. Personally I’m not a huge fan of depressing story telling, and the overall sense in Alcatraz is that no matter how big the victory, there is still a dark underbelly, waiting to be found. I will admit though, that it is pretty good character development, the way Alcatraz continually repeats that he is not a good person, which adds to the overall dark presence in the book.

I apologize for this review being a little lack-luster. It’s been a few months since I read this book, and I guess I’m once again learning that writing a review of something I didn’t just finish reading is not a good idea. Well, I hope my review for the next book is better, which it should be, since I just got my hands on a copy of it and plan to read and finish it soon.

If you liked my review, buy the book here: Alcatraz Versus The Evil Librarians