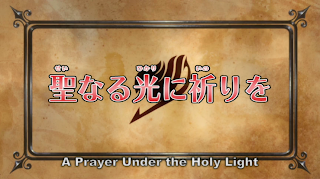 It’s great that I don’t have large amounts of active readers, because it lets me get away with posting a review several weeks late, and still have it posted under the right date. That aside, I really need to get on the ball and figure out a proper schedule for writing these anime reviews that are meant to be a weekly thing. If I could get myself to write these regularly I’d be satisfied even if they are the only reviews I do all week. That would still put me at a better track record than what I have now.

For the sake of catching up and getting on top of my work load, the next few Fairy Tail reviews will all be a bit shorter than the past ones have been. I’ll probably also use fewer screenshots.

Erza and Jellal continue their confrontation, with Erza deciding that she still can’t kill him, even after everything he’s done, and she decides to hold him there until Etherion fires and kills both of them. Erza reveals that she’s done some research into the R-System, and reveals that Jellal has not yet completed the magic, that he needs an insane amount of magical energy to power the spell. Magical energy that he does not have.

The Council finishes preparing Etherion, with three minutes left until it is fired. Jellal says that now, at the very end, he’s been freed from Zeref’s control, and now all that is left for them is to die together. 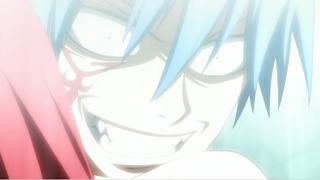 Of course this isn’t the end, and once Etherion hits the tower reveals its true form, as a giant Lachryma crystal, designed to store all the energy from Etherion, and giving Jellal all the power he needs to fuel the R-System. 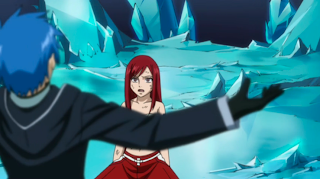 This is Erza’s Punk’d face.

Jellal reveals that he and Siegrain are the same person, and not twin brothers like everyone thought. 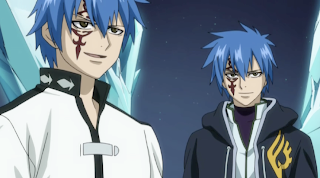 Jellal prepares Erza as his sacrifice, but she is saved at the last minute by Natsu, and the final confrontation begins. Of course Natsu’s bedside manner still needs some work. 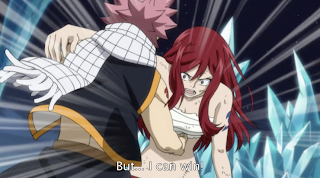 Not me you idiot! Punch the guy with blue hair!

Jeez, you know you aren’t treating your friends right when even the enemy is shocked. 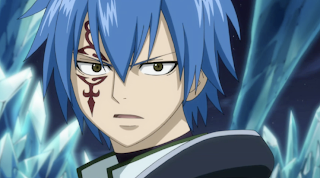 The theme used during this fight is new, and just shows how much the series music has been improving. Yasuharu Takanashi has made music better than the show it was written for before, but in this case it’s the union of great music and a great show. I wasn’t looking forward to this arc quite as much, but have been finding myself enjoying it mostly thanks to the great music that has been introduced this time around.

Jellal manages to beat Natsu in the first round, but makes the mistake of revealing how important the tower not being damaged is. Unfortunately for Jellal, property damage is Fairy Tail’s specialty. 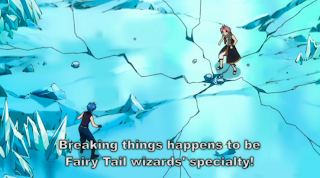 Just one Fairy Tail Wizard is like five Tim Taylors.

Overall, a great episode, and as the ending music plays I have to admit, they’ve finally found a song that doesn’t sound out of place for the ending, no matter how dramatic it gets.