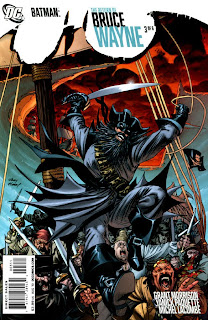 We start off this third issue with a flashback of when Bruce was hit by the Omega Device (is that what it’s called? I wouldn’t know, didn’t read Final Crisis) right after having used a gun *sigh* to shoot Apocalypse.

One of the things we learn about this issue is that Bruce doesn’t travel through space, only time. So he’s always ending up at the same place, which is nice because it gives a connection between the individual issues that all run on individual plots, and creates a running thread through the whole thing.

Bruce is captured by Blackbeard, who mistakes him for the Black Pirate, and threatens the life of his hostage if Bruce does not show him where the Black Pirate hid his treasure. They go into the caves, which is where we get the connection of his having been there in the past. The scene changes to Dick and Damian searching the site where Batman disappeared. This adds up to the other superheroes trying to figure out how to get Bruce back.

After defeating Blackbeard, Bruce leaves, slowly gaining an understanding of what is happening. The book ends with him as a Cowboy, and opens with the promise of a cross-over with Jonah Hex. Already I am liking issue four.

This issue was pretty decent. It helps that the story is slowly coming together, and we’re approaching the end of the mini series. Here’s hoping it ends strong.

If you liked my review, buy the issue here: Batman Return of Bruce Wayne #3