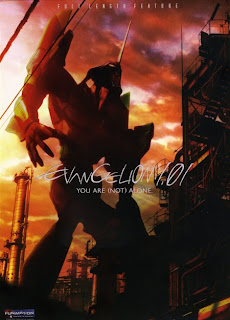 First off, could somebody explain what the deal is with all the different titles for this? The original, according to wikipedia that is, is called Evangelion: 1.0. The copy I have, the American Dub, is called Evangelion: 1.01. And then the special edition is called Evangelion: 1.11. Is that the new thing? Changing the title when you release a special edition? It confuses me and I don’t like being confused. Also, what makes absolutely no sense is that 1.11 is cheaper than 1.01. So you pay less for the special edition? Even stranger? The Blu-ray copy of 1.11 is a whole five dollars cheaper than the DVD version. I no longer understand this world. If I owned a Blu-ray player I’d be sorely tempted by that price. Fact is I don’t, and I already own a copy of 1.01. I’m feeling slightly cheated that the special edition is now cheaper. I’d feel a lot less annoyed by this whole strange naming if I wasn’t convinced that it’s just a way to trick us into buying the same movie twice, or more. I’m not a huge fan of special editions anyway, if you were going to give us that stuff, put it in the first edition. Or wait a bit longer before releasing the special edition. It doesn’t feel very special if it only comes out a few months after the regular edition. You now what you could have been doing with that time, Funimation? Licensing and translating the second movie. Not only would that actually feel like you made progress, but then I’d actually be able to get my hands on a clear copy of the movie. Sure I’ve already watched the fansub, the horrible, horrible cam-rip fansub, but I’d appreciate actually owning a copy of the movie.

Now that I’ve got that rant out of the way, let’s move on to the actual review.

The storyline is basically exactly the same as the original up until Episode Six. As such the re-watch-ability isn’t the highest. It sets the stage for the other three movies, but if you’re a huge fan of the series you won’t find anything in this movie that you haven’t already seen. The fact that the animation looks much cleaner is a big advantage that the movie has over the series, so for anyone that hasn’t gotten into the series yet I’d recommend trying out the movie, as the movie format has to focus on the main plot rather than extending it over several episodes as the TV series does.

As far as the English Dub goes Spike Spencer returns in his role as Shinji, but other than Alison Keith for Misato most of the characters have new voice actors. It’s important to note however that all the other voice actors fit their roles, and never at any point was I distracted by the different voices.

After having to wait so long to finally get my hands on a copy I was of course ecstatic, and watching it through the first time was definitely worth it. Only downside is that when I watched it through a second and third time the novelty of it wore off a bit and the improved animation really didn’t help much that I’d already seen this story before.

Needless to say, I am a pretty big Evangelion fan, I know it’s not “teh greatest anime evar” (sorry, that guy in the suede) but it was still one of my first anime that wasn’t Pokemon, and I think we can agree that was a step up. As such I grabbed this one for my collection as quickly as possible. I recommend this one for fans who have to own everything Evangelion, even if you won’t rewatch it that much, and for anyone that hasn’t gotten into the series yet. It’s a pretty decent starting point and cuts out all the pseudo religious babble.

If you liked my review please by the movie here:
Evangelion: 1.01 You Are (Not) Alone (DVD)