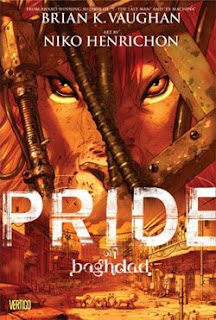 These aren’t the kid friendly, Hamlet inspired Kings of the Jungle here. Pride of Baghdad is not a read for the young, and even some older. Rape is part of a character’s back story (seriously, what’s up with that? It’s the second book in a row that I’ve read that uses it as a story telling tool. And don’t even get me started on all the manga that uses it), though since she’s a lion, I’m not sure what to think. A lot of the animals come across as almost more human than animal, while at the same time after a lot of what happens I can’t help but think, “They’re animals, of course this kind of thing happens.”

The story of Baghdad, and its message, is to portray the effect of war from the point of view of animals. The war is meant to come across as a strange, alien thing. Personally it would work better for me if the Lions weren’t so human, rather than being animals. Mostly this is a problem of dialogue, where animals say something that just sounds strange coming from an animal. Like a turtle (tortoise?) knowing the name of a river. Seriously? The turtle understands human and heard someone call the river by its name? 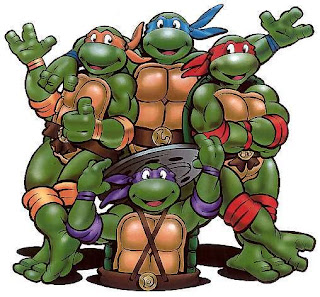 Plot-wise the story is quite weak, as it only serves as a tool to portray the human world from an alien perspective, and for to reach the last line of the Graphic Novel.

Soldier 1: Were they wild?

Sergeant: No, they were free.

Who talks like that!? I apologize for the abuse of punctuation, but seriously!? That’s how you’re going to end your comic? With a cheesy line spoken by someone who has no place saying that? Was that just the captain’s habit? To go around saying, “No, they’re free”?

Soldier 1: Sir, are we sure these were insurgents?

Captain: No, they were free.

Okay, so that was a lame joke, but I’m sorry, this really is a ridiculous ending for an otherwise enjoyable comic. Oh I know I chewed it out for its weaknesses and general silliness, lack of meaningful plot, and bizarre characterization, but overall it was still an enjoyable read, and, most importantly, it was a quick read. A lot of these graphic novels really are quick reads, which in some cases is a strong selling point, but in others is a weakness. In the case of Pride of Baghdad, it’s a strong point, as there really is not enough plot to support more pages.

If you enjoy non-mainstream graphic novels, this one is worth a shot. Would I buy it? Probably not, I picked it up from the library. Should you buy it? Only if you buy it from my link.

If you liked my review, buy the Graphic Novel here: Pride of Baghdad