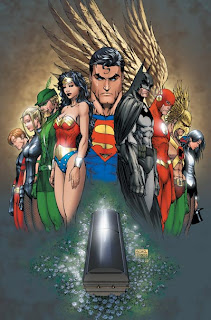 Say what you want about Identity Crisis, whether you liked it or hated it, I definitely enjoyed it more than some other G.N.’s I’ve read. While the “Thirty minutes till now” worked for the first time, it lost its effectiveness as a viable storytelling framework, and quickly became needlessly confusing.

While that annoyed me at first, fortunately Brad Meltzer stopped using it towards the latter half of the book, and I quickly found that I was enjoying what I was reading. I guess I just like mysteries more than I thought I did. Not to mention that after reading Meltzer’s version of Dr Light, I suddenly have a renewed appreciation for the Joker. As in if I had to choose who to invite to my birthday party I’d rather invite the Joker.

Without giving anything away, Identity Crisis is a crime story, with a “who-dunnit” plot, and a twist ending. The art is passable, while at the same time being nothing special. It’s good art, not much more that I can say about that.

If I had to describe this book in a word, that word would have to be “emotional.” I raged at Dr. Light, felt conflicted at the choice the JSA had to make, and the one they had to continue making, I felt chilled at the wordless page where Dr. Light is plotting, and I almost felt like putting the book down at the beginning the “five minutes till now” structure was annoying me so much.

I don’t know much about the history of these characters, I only really know Batman, and Power Girl since i just started reading her series and did some research on her background on wikipedia. Batman had very little panel time, but Power Girl only had one little cameo in a double page spread. So the knowledge I had did me no good approaching this book. However, the book itself is self contained, and every personality trait of the characters involved was properly developed. It doesn’t rely on any kind of background whatsoever. I know that all the characters have back stories, but this book uses them as if they were original characters in a brand new novel. Anything that happened in the past that was important is properly explained.

If Identity Crisis has a weakness, besides that early story structure, its that there are quite a few deaths. More than anything else it seems like they were going for shock value, as at least a few deaths had very little to do with the overall story. The aftermath of these deaths carried on to their respective titles, but at the time they served little purpose other than for the shock value.

Overall, it’s worth a read. I enjoyed it, despite the odd opening issue.

If you liked my review, buy the Graphic Novel here: Identity Crisis