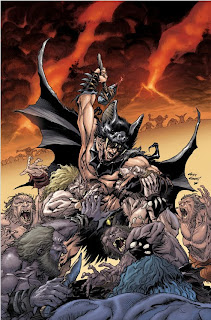 I’m sure most of you that read Batman have been waiting forever for this one. If you’re like me, you still haven’t forgiven Morrison from making this series necessary, but you’re still going to read it because you’re a hopeless Batman fan-boy.

What did we learn about Bruce in this new series? We know that he doesn’t remember who he is, which kind of takes away the whole “Batman breaking out of the greatest trap ever” doesn’t it? We also know that Superman, Green Lantern and Booster Gold are on their way to find Bruce. If they don’t the world is doomed.

There’s not much to talk about the story, Bruce shows up among a bunch of cavemen, in the middle of a tribal war, gets a giant bat headpiece, and kicks caveman butt. That’s it. And for some reason the youngest caveman puts on war paint that makes him look like Robin.

Then whatever it is that is transporting Bruce through time transports him to another time. I’d like to say Puritan, given what the woman who finds him is wearing, but the sword he’s carrying for some reason is more medieval. But since he’s still in America it’s probably the Puritan age.

So what’d I think? While nothing really happened, I still liked it. The story hasn’t really gripped me yet, which makes waiting for the new issues easier, while at the same time makes me wonder whether it’s worth buying the individual issues. I’ll definitely keep reading it, and buy the trade paperback once it hits the shelves, but I’m not sure I can recommend buying the individual issues, especially for people that already spend a great deal on monthly issues already. I know Morrison wants this to be a big, epic event, but I still remain doubtful. At least the even has started and we finally get to see Batman return back to his time.

If you liked my review, and still want to buy the individual issues, you can buy them here: Batman Return of Bruce Wayne #1

Actually…you might just be better off running down to your local comic store and buying it there. Only the first link is even close to reasonable, and you still have to pay shipping.