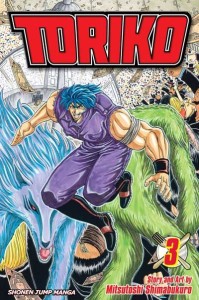 The best part of any Toriko story, so far, is the eating scenes. Which is why volume three is a must have for anyone that enjoyed the second volume. After several amazingly tense pages, they finally manage to remove the poison sack from one of the ten puffer whales. They have just enough time to enjoy the spoils of their hunt when a strange figure emerges from the lagoon.

And that’s how the overarching conflict is introduced. Considering how many other series take much longer to introduce any kind of ongoing conflict, it’s nice to see a promise of it so early on in the game. I’m kind of surprised that we get to see it so early, considering that Toriko seems especially made for monster of the week story lines. I would have imagined that Shimabukuro would have gone for a few more volumes before introducing the main conflict. But it’s refreshing to see him reward his readers so soon with proper conflict.

After the puffer whale arc is over, Toriko and Komatsu travel to the IGO’s largest biotope, in order to retrieve the Regal Mammoth before the villainous Gourmet Corp can. The part of this new arc contained in this volume is a lot of fun because it expands the world of Toriko, allowing the reader to be further invested in the story.

New characters are introduced, including the amusingly redneck Director Mansom, who fills out the role of the character-who-is-always-drinking-but-never-drunk. At least he has the dignity to look at least a little bit schnookered.

The second important character to get her time in the spotlight is Rin, currently the manga’s token female. And I have to admit, for a series as sausage centered as Toriko it’s nice to see a female character who isn’t the token boob carrier. Instead she looks tough, and even has a pair of scars, one on her face and one on her leg. That’s a pretty bold design choice on Shimabukuro’s part. I could count the number of female characters in shonen manga that have scars on my amputated left hand. That I lost.

I’m also a bit fond of the decision Shimabukuro makes to give her a slightly more stocky build. She still has the necessary assets (which is only fair, considering the muscles the guys get), but has a fairly solid build overall, which allows her to fit into the cast surprisingly well. She doesn’t look like she’s there just because a dose of estrogen was needed. She’s there because she’s a part of the cast, and she looks the part. She looks like the kind of tough character female that doesn’t take no non-sense from anyone, and doesn’t care about looks as long as she gets the job done.

Which makes it doubly cute when she starts obsessing over applying makeup when she finds out Toriko is at the coliseum. Some would say her actions make her character design nothing more than a shallow attempt to give her the illusion of not being the stereotypical shonen love interest, but I say that just endears her more to me. I’m a big fan of dissonance in characters. So when a female character who looks or acts tough suddenly has a girly moment, it just makes her all the more appealing to read about. Kind of like how Erza Scarlet from Fairy Tail is the typical tough woman, but she has her moments where she starts obsessing over being an actress, or laying waste to her surroundings when someone knocks over her strawberry cake.

It’s why the tsundere formula is so popular. A character who acts a certain way becomes that much more enjoyable to read or watch when she or he suddenly start acting otherwise. The cutest girls are the ones who act like they don’t care what the main character thinks, and are then seen obsessing over which clothes to wear.

Add in some touching moments as well as some overall great action, and this volume ranks highest among the series so far. Though I have to admit I wasn’t too keen on the concept of a Gourmet ID. It seemed rather forced and didn’t make sense when it was explained. So I have a hard time saying it’s anything other than an attempt to make everything be about food. In this case, not so successful.

Every series has a point at which readers can be certain whether they will like a series. I think that for Toriko this is that point. Not only have the last two volumes given a good indication of what kind of read this series will be, but this volume has some of the best writing for the series. I honestly think that anyone who makes it this far will be along for the rest of the series. It also helps that it’s also the first volume with a serviceable cover. Though I am a little skeptical about the color schemes.

So if you want some good old shonen with a new twist, then you could do much, much worse than investing in Toriko.