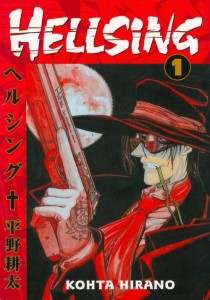 Hellsing is one of the earliest anime and manga I ever experienced. I don’t normally count it as the first manga I ever read, since I never did buy the volumes. I read it back when manga scanlations were still new, and I didn’t realize they were illegal.

I’m not the biggest fan of vampires, especially now that it’s a craze. But I’ve loved Dracula for a long time, and Hellsing is a fairly good companion piece for that classic. When I think vampires, I expect a lot of bloodshed and awesome carnage. I’m a little squicky on the drinking part, but when it’s in black and white I can handle it well enough.

Volume one starts with an entire police squad being massacred by a single vampire. The lone survivor, Ceras Victoria, tries to flee from her zombified former comrades, but is ultimately captured by the vampire priest. Before said priest can suck her blood, he is interrupted by Alucard, a vampire who hunts vampires for the Hellsing Organization.

Alucard kills the priest’s ghouls. And before Alucard can finish him off, the priest uses Ceras as a shield. Rather than back down, Alucard asks if Ceras is a virgin. When she says ‘yes’, he shoots her through the chest to hit the priest. The first chapter ends with Alucard declaring there were no survivors, while carrying a newly vamped Ceras in his arms, much to the consternation of his boss, Sir Integra Hellsing.

The rest of the volume contains Integra’s back story, and how Alucard came to be in her service. It’s a bit odd that we get a flashback in only the second chapter, but I’ve known other series to make their first chapter the flashback. Other than that the other chapters are a one off vampire hunting chapter, and three chapters introducing one of the series’ main antagonists, Father Alexander Anderson.

It also includes the first part of a three chapter side story called Crossfire. The story focuses on Heinkel and Yumie, two minor characters from Anderson’s Iscariot division.

Hellsing has the odd distinction of being one of the rare manga that isn’t set in Japan. In fact, besides Yumie—who wields a katana and is Japanese—it has absolutely nothing to do with Japan, whatsoever. Unless you count the Japanese view of what a religious debate looks like.

Granted, in a world where vampires roam free, I’m pretty sure that stakes, rather than rosaries, would come standard issue for Priests. Though, if vampires and other such monsters were real, I doubt there would have been much of a reformation. I imagine it would have gone something like this.

“We don’t believe in your doctrine!”

“Okay, fair enough, but you have to train your own vampire hunters now.”

“Actually…you know what, I think we misread this section in the bible. All hail the pope, slayer of vampires!”

Hellsing is a lot of gory fun. The first volume tries its hand at doing…something with religious conflict. I’m not sure exactly what that something is. The religious dialogue is so easily overshadowed by the stabbing of vampires that I can’t help but think it is meant to actually be read as cheese, rather than anything deep. And considering how silly Hellsing can get with religion, I can definitely say that the religion is never meant to be taken seriously. Which makes it a lot easier for me, as a christian, to stomach. Though most of the time I can’t help but think about how much more badass manga christianity is than real christianity.

I can only wonder what manga Jesus is like.

If you want bloody, badass vampires, then you can’t do much better than Hellsing. There may be a lot of silliness, but that’s only spicing to the gore cake. Though really, it isn’t all that gory. Besides the several galons of blood, and decapitated body parts, the manga never gets excessively detailed with its gore. So even those with weak stomachs can enjoy some good old vampire killing.

This series gets a definite recommendation, though if you want to read it I recommend hurrying over to Amazon. They volumes are about five bucks a piece right now, when they retail for about close to fifteen bucks a piece.