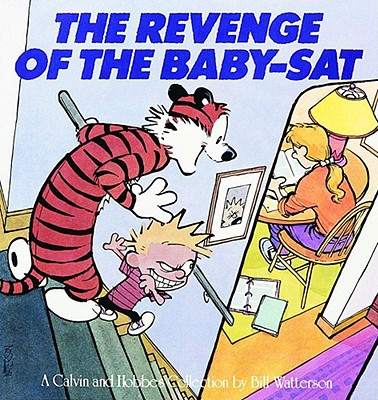 In my last review I said Weirdoes from Another Planet contained one of my top three favorite Calvin and Hobbes strips. This collection completes the triforce of comedy, with my other two favorite strips.

The thing is, I’d forgotten about one of them, but when I rediscovered it I couldn’t stop laughing for a good five minutes. It’s the story where Calvin’s dad is trying to take a picture of Calvin, for their Christmas letter, only to have Calvin ruin every single picture with the faces he pulls. The very first one of those is my number two favorite, where Calvin pulls his face, and the last panel has him running away from his dad.

My number one favorite is the mostly silent strip where Calvin’s mom puts on her nice clothes to go out, only for Calvin to be waiting for her at the door. The grin on Calvin’s face cracks me up every single time.

That alone makes this a must have collection for any true fan, especially those that share my sense of humor. But there’s more to it than that, as there always is. The titular story, Revenge of the Baby-sat is required reading for anyone that intends to read the next collection. I actually started reading Scientific Progress Goes “Boink” and it wasn’t until that story was referenced that I realized I was reading the books out of order.

The other stories are childhood favorites of mine, I’m particularly fond of the story where Calvin pushes his parents’ car into the ditch across the road, and him and Hobbes run away from home. The camping story isn’t the best of the camping stories, it doesn’t have anything to make it stand out from the other camping stories we’ve read so far. But it always brings a smile to my face, as I remember vacations that were identical in spirit if not fact. As a child I emulated Calvin, and in a strange, strange fashion, my dad emulated Calvin’s dad. (ProTip: This is not an ideal situation)

While Watterson has shown that he is not afraid of tackling serious topics, The Revenge of the Baby-sat contains possibly one of his most serious stories. It’s where the family goes to a wedding, and returns to find their house has been robbed. Nobody is hurt, but for a strip that was read by children (even if that wasn’t the original intended audience) it was a pretty big deal. I remember reading it for the first time and spending several days worried that someone was going to break into our house.

At the same time that Watterson was stretching his writing chops, he was expanding his artistic skills as well. While the first four collections were certainly well drawn, it was at this point that he really started to show off his skills. The dinosaurs actually start looking like dinosaurs, he does an excellent job adopting the more realistic style of earlier serialized strips, and the Sunday strip with the sparrow was so beautiful that it made me pause and just look at it.

I think a lot of times people assume that cartoonists can only draw in their cartoony styles. And while I don’t doubt there are some that can’t, it’s clear that Watterson is a masterful artist. He could draw in a more complicated style, but that would defeat the purpose of drawing a comic strip. The simple nature of the art, combined with the obvious skill behind that deceptively simple art, makes Calvin and Hobbes an aesthetic treat as much as it is a comedic gem.

The Grade
The score will never be lower, I can promise you that, making this grading somewhat pointless. But understand when I say, that despite the grade not changing, you need this collection.

Buy the Book! The Revenge of the Baby-Sat