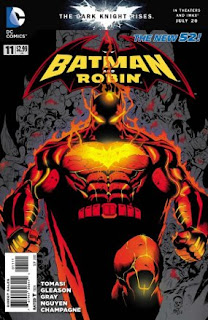 Meanwhile, Terminus’s criminals are catching and branding cops with the symbol of the bat. They then move on to a full scale assault, where they brand anyone they can get their hands on.

Batman goes after whoever is responsible for the attacks, just as Terminus’s people set off bat shaped explosions on the highrises of Gotham.

The Review
The best part of this book was, hands down, Robin’s fight against Damian. It’s an interesting way to address the major event in Jason’s past, while revealing his feelings about how Batman failed to take the Joker down after Jason’s death. Under the Red Hood has been one of my favorite Batman movies, so I appreciate seeing Jason’s feelings having evolved beyond being bitter about Bruce’s refusal to murder the Joker.

The rest of the book…was okay. I like the idea of turning Batman’s symbol against him, of spreading the fear criminals feel on to the people of Gotham. This idea has potential, and could make for an amazing Batman story. The problem lies in the execution. The plot is moving much too fast. This is the kind of idea that would need to be spread between an A, B, and even C plot. A slow burn that takes a few issues to set up. Something along the lines of Knightfall. Instead the idea is wasted on a rushed story.

We see the idea introduced when cops are attacked, and that’s a good place to start. The problem is that immediately we move on to a full on assault on Gotham. It’s as if DC is afraid to spread the story out the way it’s supposed to be. Instead focusing on a high stakes climax only two issues into the new arc. What we needed was for Terminus’s plan to be the C plot to Damian’s B plot, hidden in a completely different A plot.

A slow build to this idea would be perfect. It would be a great chance to explore the idea of the fear Batman instills in criminals, by taking that fear and putting it into regular people. It would be a completely new way to look at Batman’s methods. Maybe it would even bring the morality of his actions into question. (Except not really, the criminals in Gotham deserve what they get, but it would still be interesting to look at).

If handled properly I could see this being the next big Batman story. Instead we’ll probably get a great idea with poor execution, just another Batman story that comes and goes. Which is a serious shame. There’s still a chance that I’ll be surprised, so I won’t cast my die just yet.