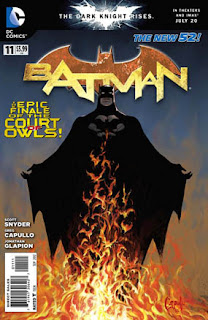 The Story
Batman and Lincoln March carry on their fight, culminating in an explosion that Batman barely escapes. Lincoln’s body isn’t discovered, and when Dick comes to visit Bruce explains how he once did have a brother, but said brother died in a car crash. He chooses to believe that his parents would never do such a thing as hiding the fact that his brother was still alive.

Jarvis’s story finishes with Martha’s misscariage, and Jarvis being targeted by the Court for defying them. Back in the present, Bruce offers to discover the truth behind Jarvis’s death. Alfred refuses, having come to terms with his father’s death on his own.

The Review
This review, as all other reviews have pointed out, is not for those that haven’t been reading the Court of Owls storyline. There’s nothing I can say, no spectacular event or action that will make you start reading the story just to get to this issue.

That being said, for those that have been reading up to this point, Issue 11 does wrap up the story nicely. More than anything else, it takes Lincoln March’s claims from the last issue and concludes them in a satisfying way. We are never given a definite answer as to whether Lincoln was Bruce’s brother or not. Jarvis’s story mostly confirms that he was not, and Bruce’s own convictions are against it, but there is still an element of doubt placed there for the reader.

The fight between Batman and Lincoln was interesting, if a bit wordy. Lincoln’s neverending dialogue reminds me of an older style of superhero comic writing. Not sure if that’s a good or a bad thing.

The scene between Dick and Bruce was a nice touch, since the relationship between the two characters is part of the heart of the Batman mythos. I can’t speak for others, but I’m invested in their story for the same reason I’m interested in Damian’s story. With Damian we see Bruce as a father, with Dick we see Bruce as the father of a grown man. The dynamic is inherently different and seeing the two play off each other reminds me of my relationship with my own father. There’s something fascinating seeing two characters on equal footing, when before they were not.

Jarvis’s story was expertly woven into the themes of this book. Rather than letting it be an interesting short story, Scott Snyder and James Tynion tied the conclusion of that three part story into the main story. With the main story we have Bruce claiming Lincoln could never be his brother, with Jarvis’s story we see evidence that supports Bruce’s opinion. A satisfying addition to the issue, and I hope we get more side stories in future issues of Batman.

The only real problem I have is with Lincoln’s Iron Man armor. Yes it’s not the real Iron Man armor, but functionally it’s the same thing. It brings up the question, “If armor like this exists, why doesn’t Batman use it himself?” He’s already a mortal man fighting amongst gods, so why would he neglect any kind of advantage her could get?

Yes, relying on his own abilities, and not supplementing them with power armor are part of what make Batman fascinating to read about. The problem is that showing someone with the same kind of power armor Batman’s Marvel counterpart uses brings up the question, “Why?” Why, if it exists, does he not use it?

Ideally I would want that question answered, but if that’s not an option then I’d prefer not to constantly be reminded that I’m still waiting for my answer. Still, it’s a small complaint of an overall great issue. There isn’t much else I could really comment on without commenting on the story as a whole, and for now I can’t do that without refreshing my memory.

I’m going to have to reread the story all in one go to give a definite opinion of the entire story. Reading it all at once helps see the story in a way spreading it over almost a whole year just doesn’t. I’m still debating about whether I should just read the individual issues, or splurge and just buy the trade paperback. Since this is one of the best Batman stories of the past year I’m definitely leaning towards buying the trade.