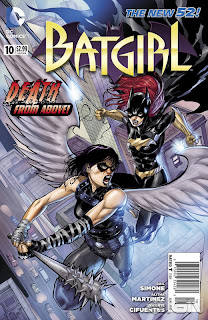 Batgirl fights several car thieves, and while one of them tries to escape he gets caught in a bear trap. Batgirl stays with him until the security detail for the party comes to take care of  him. When she gets home, Barbara gets a call from her roommate, asking to be bailed out of prison.

The two discuss Bruce’s revitalization project, with Alysia providing a counterpoint to Barbara’s opinion on Bruce’s plan. Barbara comes to the decision that she’s done fighting for rich peoples’ things.

Later, Barbara goes back to the building the story started in, and finds the three person security detail, holding the car thief, now with a missing leg, hostage. The woman holding him declares their group to be the Disgraced, before dropping the thief. Barbara saves him, but is attacked by a winged member of Disgraced. The two fight, before Barbara is surrounded by the rest of the team.

The Review
My main concern with this issue hinges on Barbara’s odd decision making. She even points out she shouldn’t have left Ricky, the injured car thief. And when she comes to that realization only a few panels after making the decision to leave, I can’t help but wonder, why didn’t she make that decision earlier?

That aside, I felt this issue is a definite improvement over past issues. While I have been enjoying the series, it hasn’t quite been in my top favorites. I very much enjoyed the scene where Barbara comforted Ricky, the fact that she abandoned him aside. It showed her as a much more compassionate character than any of the other bat family members. Sure Dick may rank close in general niceness, but we haven’t really seen him be all that compassionate recently.

While this may be me stereotyping a bit, and I apologize for that, but having the currently only female member of the family be the family be the compassionate one just seems fitting. We’ve got plenty of grim and dark in the bat books, it’s nice to see an alternate approach to vigilantiism in Gotham, and I’m glad that Barbara is the one to show it to us. It fits for her. She doesn’t have some kind of traumatic past (the whole Joker thing aside, since that happened after she became Batgirl), she’s a regular girl who became a crimefighter. So it makes sense for her to be the one to show this kind of kindness.

Ms Carnes is an interesting possible villain, she certainly employs shady characters, and keeps a strange man captive, while at the same time claiming to be the villain. I’m curious to see where Gail Simone goes with her.

Overall a fine issue, and the final conflict was a lot of fun, giving me the kind of smart fighting I’ve been looking for in comics. Anyone that hasn’t been following this series from the begining has an excelent starting point with this issue.