Derek: So, we never did get around to doing last week’s commentary, did we?

So, what are your thoughts about these two chapters?
Derek: You know, as much as I’ve been blasé about Naruto the past few years, I have to admit, these past two chapters have gotten close to getting me to care again. Kabuto’s backstory is pretty decent, and I enjoyed his story quite a bit. These were a competent pair of chapters. But I really am beyond actually caring about the series, besides just wanting to see how it ends.
Monorum: Kabuto’s backstory did make me feel sorry for the guy. It is like he said, he is nothing. I should be amazed at his mastery of the jutsus that even Orochimaru failed to learn yet I was just blind by my hatred of him. Which I still am because fuck his Edotensei! The closest thing I will come to feel for Kabuto is extreme pity. Pity that the woman who raised him like a son failed to remember him. Pity that he lived most his life as a spy. I am seeing why Itachi said that he will lose now.
Kabuto.
Has.

Nothing.
Derek: Well, I see someone hasn’t gotten to the “not caring about this series anymore” phase.
Monorum: Hey, I’m trying. I find it ironic how I used to love Bleach and hate Naruto but now it’s the other way around, except I just like Naruto. At least I can give a damn about the characters without more new ones popping up like damned bunnies.
Derek: Yeah. I used to like Naruto, a lot, but some poor choices by Kishimoto have made me too angry to actually care anymore. Though part of that I can probably blame on bad interactions with the fandom…actually no I can’t. I never got involved in any Naruto fandom. That’s more the reason I get annoyed at Bleach anymore. Naruto is really just a case study for why shipping is a terrible, terrible thing, and how it ruins series.
Monorum: Kishimoto fails terribly at writing romance and women. I’m sure others have said that but I will say it myself. Because he damn well fucking sucks that I can see it from the Moon!

I should stop cursing.


Monorum: I never got into the Naruto fandom itself. It just never worked out for me. Ninjas never got my attention. Unless they were the not traditional females who did not wear much.
Derek: Yeah. Really there isn’t much to say on the past two weeks, they were good chapters, better than I expected after the fight started. But both of us have pretty much lost our enthusiasm for the series. So, instead, let’s move on to a series that we both used to love, but now fills us with disappointment.
Monorum: AND RAGE!!!!
Derek: So, Harribel’s fraccion fight the Quincy, and get their butts kicked. Then Ichigo shows up and fights the Quincy. Then Mayuri reveals that the Vandenreich are in fact Quincy. To which I would like to say: 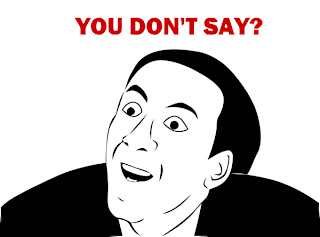 Aaand that’s about it really.


That was both weeks. I think. It’s kind of hard to say, the chapters blend together and don’t really distinguish from each other.
Monorum: What a sad waste of three females that I can’t have any attraction to because they’re not only dead, they were not around long enough for me to care. At least Nel is back. But yeah, that Quincy, his cockiness is irritating the heck out of me. I know that the Vandenreich are suppose to resemble the Nazis but dude, I just want to strangle that man so much. His face. I want to smash my fist into it. I have nothing but contempt for the Vandenreich.
Derek: On the other hand, the King of the Quincies is pretty badass. Heck, in design alone he’s an improvement over the last two antagonists.
Monorum: Well okay I’ll agree on that. I will never understand why I keep thinking he’s related to Zangetsu in some way. If he is Zangetsu’s older brother or some sort, I will…not eat my shoe because I would get sick and die and eating a shoe is ridiculous for me.

Seeing the other Shinigami was fine but I wish there were more full body shots of them. And seeing how this is the final arc, Kubo is going to have some people we love (or used to love) die later on. Then again no one really gave a rat’s butt about Sasakibe except for the 1st Division Captain who wanted more than nothing to torch those Spirit Nazi bastards as much as I do but for different reasons.