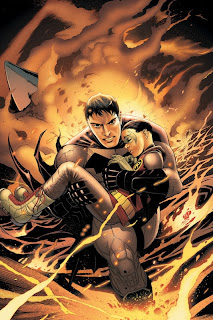 Not that much happens this issue as far as action is concerned. Bruce gets Damian home, after it is confirmed that Damian killed Nobody. The two of them have a heart to heart about Bruce’s principles vs how Damian was raised. It’s a necessary moment, that provides necessary closure for the past few issues. Seeing the three of them, Alfred included, going out to do “something mundane” is a good closing scene for this arc. At the end of which we move on to the Court of Owls storyline.

First issue I feel needs bringing up is, when exactly is this supposed to be taking place? I know I keep bringing it up, but now more than ever it’s really bugging me. The ending suggests that the Court of Owls takes place right after the end of the Nobody storyline in Batman and Robin. But that would make absolutely no sense, since Bruce can’t both be missing and saving Damian from Nobody. Unless…Hush?

Anyway, that’s enough of that, I’ll try not to bring it up again, and I’ll just assume that the events of Batman take place after Batman and Robin. While this issue didn’t have much action, I hardly see that as something negative. This is the necessary deep breath before the storm. In fact, I actually appreciate that Batman and Robin appears to be the only book that has given us a chance to appreciate the end of the past seven issue story, before moving on to the big crossover.

Damian started out as a character I was not too fond of, I tend not to be the biggest fan of annoying brats. But he’s grown on me, mostly thanks to the past seven issues of this book. I very much enjoyed the interaction between Bruce and Damian, both of whom are damaged people, but have to find a way to live with each other. Because while Bruce isn’t a model father, what with the constant child endangerment and all, Damian’s mother isn’t exactly wining any awards either. The interaction was fascinating, and the pay out has been worth it. Though I expect that the two will continue to rub each other wrong, I appreciate that they have reached an understanding, and look forward to seeing how Damian develops from this point onwards.

Batman and Robin is definitely one of the series I will continue to review. I’m going to have to drop some other series, mostly because I am at a loss for what to say. I might start reviewing some of the new offerings, such as Earth 2 and World’s Finest, as soon as I read them and decide whether I have anything to say. If nothing else, Power Girl finally made her way into the New 52. I’m not sure if I’ll read Batman Incorporated. It may be a Batman book, but I thought the idea was kind of silly the first time around.

Look forward to my batch of 009 reviews, and then some, coming soon hopefully.