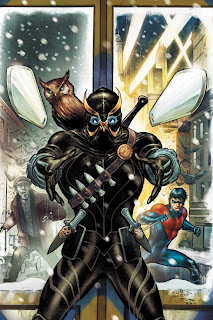 This issue is interspersed with the story of a young boy that made it big as a circus performer, and Nightwing investigating one of his weapons in a police evidence locker. He gets the call from Alfred, and goes to city hall to fight off an attack by the Talons. The story switches between the two narratives, leading up to the final pages of the issue, where the two combine quite elegantly.

This is the first of the non-Batman books to dive into the Court of Owls storyline. And it’s a fair treat. It’s always nice when a writer whose recent work has been satisfactory at best manages to really capture your attention. And the way the two stories are tied together shows that Kyle Higgins knows what he’s doing. Since previously I’d been ambivalent towards the Nightwing series, I’m pleased to see how this crossover is breathing new life into the series.

At the same time I can’t help but wonder if the Court of Owls crossover caused some of the lack of focus these books in general have been seeing. The writers of all the different Bat Books knew about the story idea, and they all decided to work towards the crossover, but since the only one really doing any of the setup work for that event was Scott Snyder, I think it left the other writers in limbo. They knew they were moving towards a big event, but none of them were involved in the lead up to said event, meaning they couldn’t start anything overly ambitious that would need to be interupted for the crossover.

In the case of Batgirl it worked out pretty well, since the overall story was about Barbara finding her place as a superhero, and not just a hero, so a few shorter arcs fit just fine in the overall narrative. For books like Nightwing it meant that while Higgins had more build up towards the crossover, it also meant that the Hailey’s Circus arc went on longer than it necessarily should have. The encounter with a demon in New Orleans makes sense now, since it’s clear it was a filler issue meant to stretch the other issues until issue 008 when the crossover finally started.

I’m curious to see where Nightwing’s story goes after this. Personally I’d like to see some more interaction between him and the rest of the Bat family, just because I like stories like that, but I’m not holding my breath. I imagine this crossover event will probably be the closest I get to seeing that, so I’m looking forward to what the next set of issues bring.