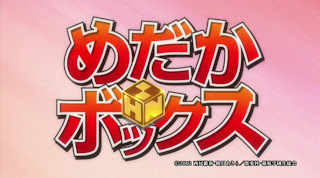 Watch the Show Here!
Plot Summary
The swim team have proven themselves to be reckless beyond
all doubt. Zenkichi and Akune compete in the second event consisting of a
two-person three-legged race underwater. Yakushima and Tanegashima from the
swim team took first place by storm with their reckless actions.

The third
event was catching eels and the team with the most eels caught wins the most
points. Medaka’s poor ability with getting animals to like her made the Student
Council earn zero points as she failed to catch any of the eels while Kikaijima
representing the swim team won. 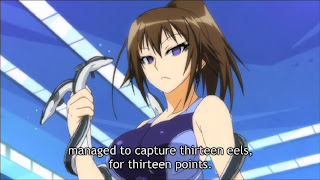 Unlike Yakushima and
Tanegashima, Kikaijima took the idea that there are things more valuable than money strongly from Medaka and was more than willing to take her out in the final event, the underwater calvary
battle. As soon as the final event started, the swim team and the Student Council
clashed with each other. During the underwater calvary battle, Medaka uses her
prenatal appeal to goodness to understand why the swim team are the way they are. 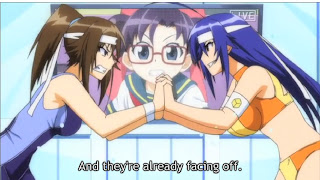 This time she was right as Kikaijima tells her that money is the sole reason why she, Yakushima, and
Tanegashima are the way they are. She goes into a speech about how anyone would
care if someone’s wallet was stolen but would not care if they died. Medaka
tells Kikaijima that she would care if Kikaijima died and shows her affection
the most through kissing her on the lips. This surprises everyone as Medaka
knocks Kikaijima into the water, knocking both of their teams out.

Medaka tells the three from the swim team that they do not need to change who they are but that they should live for money than die for it. In
the end, it was Nabeshima’s team that won the final event by a landslide but
ended up sharing the prize money among all of the other clubs. The next day,
Medaka introduces Mogana Kikaijima as the new Treasurer for the Student
Council. 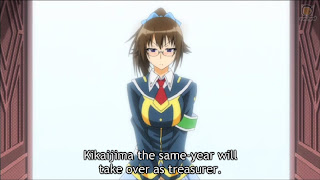 My Opinion
This episode was overly touching what with that kiss from Medaka.
Not only that, it only adds to Medaka’s character more as she is far too noble
with all she tries to do. Seeing Zenkichi and Akune try to work together
through the second event was a riot. There was only a brief moment to see
Medaka in her eel costume in the eel catching event that she lost.
Medaka’s actions continue to astound me. When I say I deeply
admire someone as noble as her, I do mean it. But I have a feeling that her
noble actions will catch unwanted attention and create some powerful enemies.
But in the meantime, I will just enjoy the calm before the storm. 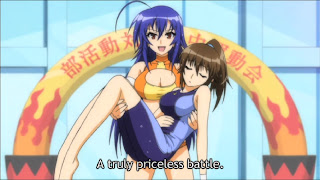 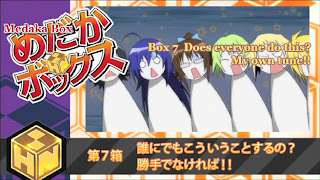