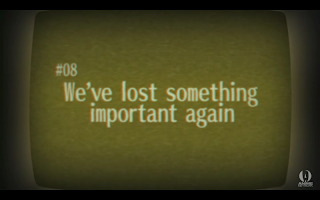 Plot Summary
The group decide to keep an eye open for any possible future victims by checking the midnight channel every rainy night. In the meanwhile they have a school camp trip to go on. They buy ingredients for dinner, and while the camp will mostly be picking up trash, there are some people that go swimming in the river. Yosuke thinks of something and runs off on an errand. 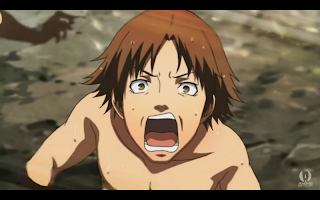 When the girls reveal their creation, curry, it is even more gruesome than its predecessors in a long line of terrible anime cooking. It takes out both Yu and Yosuke, who wonder what happened for it to turn out so terrible. How is shown with a flashback to the girls following a strange line of logic, leading to them buying a variety of inappropriate ingredients for the curry. Yosuke gets pissed at the girls for essentially causing them to starve. 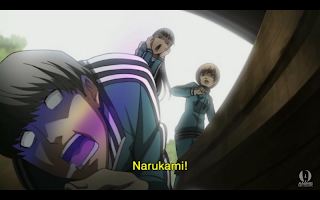 Fortunately, the fat chick comes to eat the rest of their food, because fat people are always hungry, and not only that, because she’s fat, she clearly must have no taste, how else would she spend so much time eating everything she can so she can be as fat as she is? Because she’s fat. And fat chicks are funny.

Moving on from the cavalcade of insensitivity, we movie right on to Saki Konishi’s younger brother, who is mourning the loss of his sister… Oh this can’t possibly end well. Persona 4 you’ve already bungled being sensitive in literally every single other sensitive topic. Please, for your own sake, abort!

Turns out Konishi is angry at Yu and Yosuke…because irrational anger towards complete strangers is the only way grieving people act. 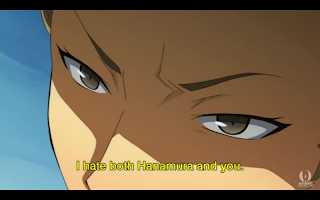 The girls order takeout, which is a thing in the anime, but not in the game. And they even order enough for everyone. Meaning the girls are nice, and Yosuke is an even bigger ass for the problem being resolved so easily. Turns out Kanji is a friend of Konishi’s, and after getting tired of being questioned about him, goes off to drag him there. 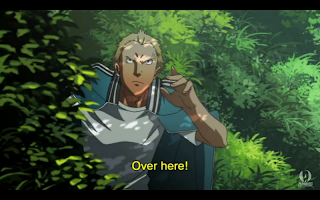 Yu asks if Konishi is being left out among his class members. Konishi says that people are being careful around him, because of his sister dying. Yu shares Kanji’s second helping of food with Konishi and they hang out with him for a while. Konishi then apologizes for telling Yu and Yosuke that he hates them. 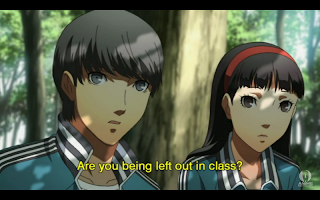 While picking up trash they remember that there is a murderer they need to be catching. They talk about their leads, and after meeting Konishi they are determined to catch the killer. Yu shares a tent with the other two guys, and him and Yosuke give Kanji a hard time about sharing a tent with him. Because he’s gay. And as we all know, during the day gay people give style tips to straight people, but at night they become rampant sex beasts. Who roam the night looking for butts to sex. Like sex-werewolves.

Deciding to prove that he is straight, Kanji decides to use his sex-werewolf powers for good (read: heterosexuality). And the best way to do that is to do Jeebas knows what to the girls. Fortunately in anime land women have the power to always knock out assailants for the sake of comedy. (When it  isn’t for the sake of comedy they lose these powers along with their clothes). 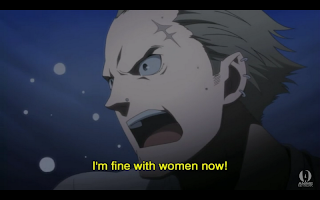 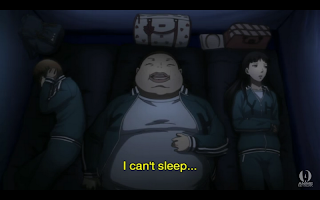 After knocking Kanji out the girls go to stay with the guys, because nobody wants to share a tent with a fat chick and a gay sex-werewolf. The next day the five of them go to the river, where Yosuke forces the girls to put on the swimsuits he brought, because they owe him for the terrible food.

Yeah, that plot point worked better in the game. 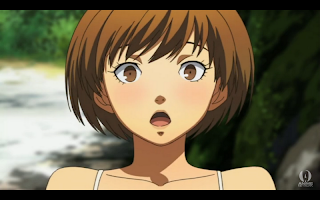 Fortunately it’s all for comedy, so the guys get kicked off the twenty foot cliff into the water… Jeez. And then Morooka pukes upstream. And merriment is had by all.

The fat chick approaches Kanji, and it is implied that the sex-werewolf was himself sexed by the fat chick.

But it is all a big joke, as fat chick isn’t looking for commitment. All she wants is a one night thing. And of course Kanji’s caring friends know how to make him feel better after being rejected by the only woman who will ever touch him. 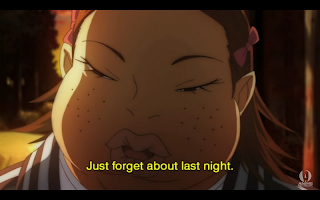 My Opinion
Soooo…why was this episode rated TV-MA? I mean, I can imagine that it had something to do with the swimsuits, but…it’s a cartoon, Hulu. And not only that, it’s a cartoon that doesn’t show any nudity. So why the MA rating?

I definitely like the battle free episodes of Persona 4 much more. The battle scenes are oddly colored, with too many shadows and light, and are hard to follow. Episodes that focus on day to day interaction, or the mystery rather than fighting. Out of all the episodes this is one of the more complete ones. As opposed to a continuing story, the episode focuses on a more episodic format, which makes for a more compelling and satisfying story. I love the joke with the terrible food, and Konishi’s little brother coming in now was an interesting addition. A surprising amount of things happen this episode, that remind one that anime doesn’t have to be twenty minutes of an extended fight scene.

And no, that is not a Dragonball Z dig, plenty of modern shonen fighter series do that. Maybe I just need to expand my taste in anime. And with shows like Persona 4 around, I figure I could do worse with my time.

This is a difficult episode to discuss, as it does continue to bring up issues that I did not discuss last episode. The thing is, that the gay/lesbian issue is not something I neither want to, nor feel like I’m qualified discussing. But the issue was brought up in several comment long post, so I feel that I can’t comment on this episode without bringing up what appears to be on peoples’ minds. 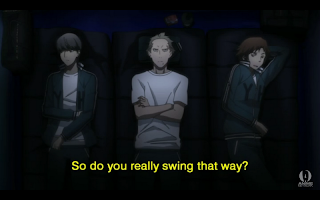 The homophobic elements are still present in this episode, but are toned down in that the entire episode isn’t about it. The scene in particular is when Yu and Yosuke give Kanji a hard time while they are sharing a tent. Let it be known, Yosuke is an ass. There was no debate on this issue, he’s an ass plain and simple. He’s not an unlikable character, but he is still incredibly close minded/a normal teenage guy. 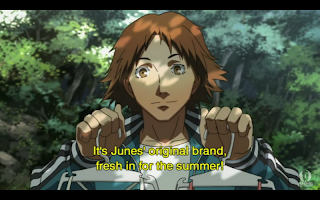 The thing is, while the attitudes of the characters, and by connection the creative staff behind them, are in no way admirable, I still find an element of realism in them. Yes it’s close minded, and bigoted, but I can easily see a teenage guy worrying about the possibly gay thug sharing a tent with him. Where this is a problem is that Yu has been shown to be accepting of a lot of personality issues. But suddenly this one is going too far? I can’t help but seeing this as his personality gag being taken too far. The joke where he blatantly asks about their anal virginity is very much in line with the personality he has been given, but when you add that on top of Yosuke being an ass it becomes too much. Though I can’t lie, I laughed at Yu’s line the first time. Because I’m a terrible person.

Yu knows who Kanji is, has seen his inner self, and the way it is portrayed is that Kanji isn’t necessarily gay, he just has girly hobbies. If he really was gay, that would be fine, though I’m not sure I want to see anime—an art form where homosexuals are either ridiculed or fetishized—dealing with those issues. But the explanation given was that Kanji likes girly things, and if that’s the explanation they want to go with, that’s fine by me. But there is no need to belabor the point by making Yu as big an ass as Yosuke.

That being said, despite everything, I really did like this episode. I just have to not think about it too much. Which is unavoidable to write these reviews. And while I found a lot of messed up stuff, I generally go into new anime expecting some weird, weird stuff. The ending was amusing, and while it is a bunch of fat jokes (that no one complained about. Apparently fat people are still an acceptable target for bigotry, but make fun of gay people and you’re going to hell in a handbasket), I can appreciate the fat chick with the bitchy thin chick attitude. It’s fresh. I guess. 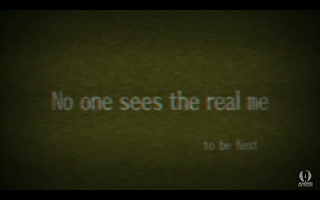