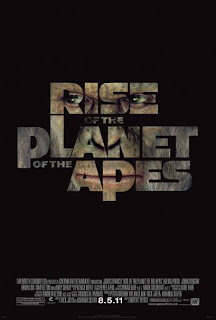 I came to this one a little late, since I usually try to wait for movies to come out in the dollar theater. So my opinion on this one isn’t the timeliest, but I’ll try to make it valid.

This movie suffered from schizophrenia. For the first two acts it was a character driven drama about one man’s drive to not lose those close to him, and one ape’s struggle to find where he belongs.

I can’t believe I just wrote that sentence.

For the third act RotPotA devolves into Hollywood stereotype. Often movies like to play it safe for the third act by making it all action, all the time. Sometimes this works, but as anything else, it becomes tiresome when overdone. Most of the time it comes across as lazy.

In the case of RotPotA it works though. The movie is a prequel to the planet wide overthrowing of humanity by apes. Essentially it is a movie about a revolution, so an action scene is inevitable. The movie manages to build towards the action well, but it takes so much time doing it that in the end there is a lot of buildup towards what doesn’t feel like much payoff.

The movie has some stellar moments, such as when Caesar speaks for the first time, but rather than capitulating on such moments, the ending feels oddly incomplete.

But only if you do not immediately leave once the credits start rolling. The true ending adds a great deal to the movie, and while it doesn’t quite make up for the lackluster climax, it does feel much more true to what the movie is doing.

In the end, this is a movie that loses focus towards the end, and replaces a proper climax with a tacked on Hollywood ending. It doesn’t quite resolve the promises made during the first act, while at the same time following the proper course of the story. It’s both satisfying, and unsatisfying at the same time. Competently made, but lacking something extra to really make it shine.

The apes were all done in CGI, and while it was well done CGI, it still made it difficult to fully accept that they were real. Towards the end it felt like I was able to accept what I was seeing, but for most of the first act my mind was rejecting the fake looking apes.

Overall, a good movie, but not a great movie. It could have used a great deal of trimming to fix timing issues, and then I would give it a stronger recommendation.