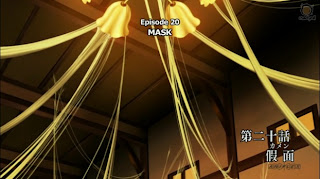 Introduction
This episode is the first part of a filler arc. Right now though, it looks just like any other kind of filler episode but if any of you have paid attention to what has been going on with Yukio, be prepared for a surprise at the end. I’m still getting used to this so bear with me on the plot summary. 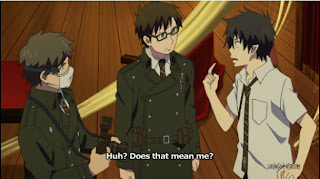 Plot Summary
Rin and Yukio return to the monastery they were raised in only to find the priests who lived with them covered in spiderwebs. Luckily, the priests are still alive and the exorcists who are there will try their best to free them in eight hours. The only clue Rin and Yukio get is that someone wearing a mask was last seen fighting them. 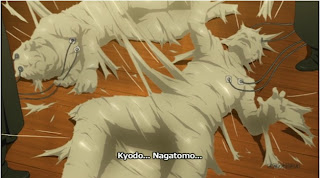 The culprit left behind a message in Polish that pretty much says they will hurt anyone related to the son of Satan. Rin gets enraged by this and goes off on his own against his brother’s orders to find the culprit. Little did he know, this is just what the culprit wanted him to do. 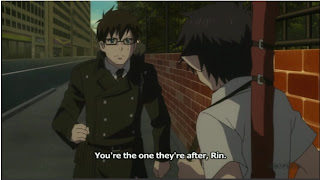 Rin finds the culprit, the ‘man in a mask’ but is easily overwhelmed by him, his Koma sword being sealed by the webbing. Rin tells the masked man to kill him already but the masked man has other plans for him and that is to make Rin suffer by watching the masked man kill those he cares about. Yukio appears and chases the masked man away. As Rin tries to follow after him, Shura stops him, commenting on having to always be ordered to go after him whenever he goes off on his own. Yukio decides to chase after the man rather than wait for backup. 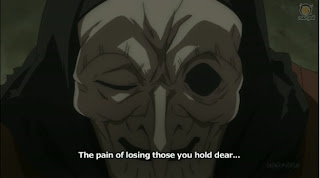 Yukio follows the masked man to a clock tower where there he finds Noihaus. He questions Noihaus if he is the one behind the mask as Noihaus calmly denies such claims. He questions Noihaus more, trying to find any fault in his lies but Noihaus says he is not lying. Yukio, still believing the former teacher is the prime suspect, attempts to take him in but fails as Noihaus escapes. 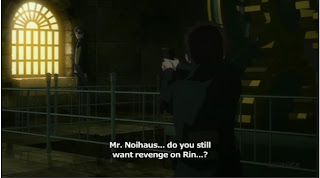 Rin is seen trying to draw out Kurikara but the webbing holds on tightly, keeping him from gaining his full powers. Yukio prepares to go out again to find the culprit as Rin tells him that this is something he should be doing and he should stay behind. Yukio goes so far as to point his gun at Rin, causing Shura to act as Rin is put to sleep by the tranquilizer and Yukio leaves to find Noihaus. 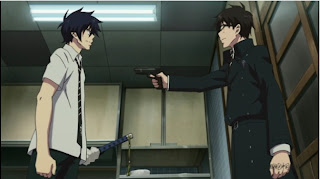 Yukio, along with three other exorcist instructors use their tracking device to end up in the sewers. There they find Noihaus who exclaims what a pest Yukio is. Yukio tails him but before he could catch him, he hears a scream and returns to find one of the instructors attacked by the masked man. 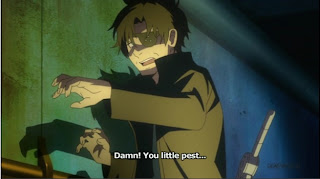 “And I would have gotten away with it if it wasn’t for you, meddling kid! Wait…I did get away with it! Nyanya!”

Rin wakes up and attempts to rush out after Yukio only for Shura to stop him and tell him he has to learn to control his flames. By manipulating his flames at will, only then will he be able to take on the masked man by himself without any supervision. Rin finally gives in and understands that he has to do this in order to protect his friends. 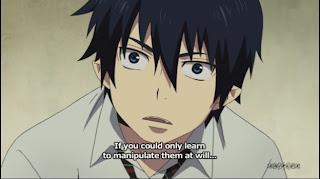 Yukio then learns from one of the instructors that the masked man is heading to the boys dormitory at the school. At the dormitory, among the many, the masked man has captured Suguro, Konekomaru, and Shima, the latter whose cellphone drops out of his pocket. The masked man issues an order that only the son of Satan is allowed into the building. 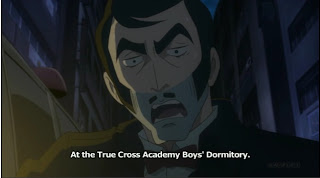 Mephisto comes along and tries to take matters into his own hands by using his demon magic, only for it to be washed out by Arthur using a fire hose who says he does not approve of Mephisto’s magic. It then turns out that Mephisto is under arrest by the Vatican. He does not run and goes along with the officers and questions what will happen next. 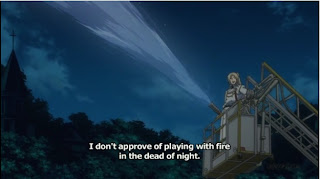 Firefighters, you can learn something here.
You mean that they shouldn’t be douchebags like Angel? -The Editor

Left with no other choice, Yukio volunteers to go in on his own as a instructor tries to stop him him. Yukio shakes him off and tells him that no matter what happens that he should not summon his brother. Yukio then heads into the boys dormitory. Inside he finds the three boys all strung up but still breathing besides the rest that are all covered up. Suguro questions why are they the only ones not fully covered as the masked man tells them that it is because they are his hostages to lure Rin. 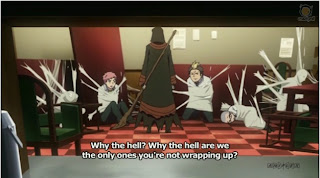 Because you three stand out too much.

Yukio attempts to take in the masked man but fails as he is told he will become the new hostage and the other three were going to be finished off. Luckily, from contact through Shima’s cellphone, Rin appears cloaked in blue flames. Using his flames he finally gained control over, he frees the boys from the webbing along with the seal on his Koma sword. 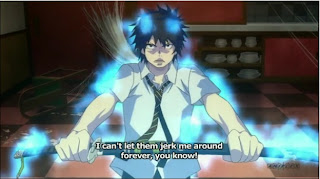 Rin defeats the masked man and knocks him out of the building. Yukio tells Rin that he was trying to protect him as Rin jokingly tells him he still needs to work on that. Yukio is frustrated, commenting at not being able to protect Rin. Outside, Shura approaches the masked man only for the mask to shatter and reveal his true identity. 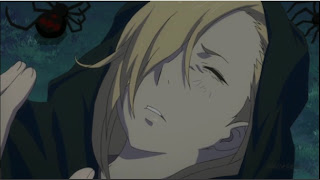 Spiderman is a Spiderwoman! 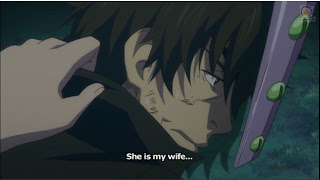 Rin and Yukio return to their home to free the trapped priests who thank Rin for freeing them. After sharing a good time with each other, the priests ask Rin where Yukio is. Yukio is outside of the monastery and before he can go inside to see the priests, he is approached by an exorcist who says there is someone he wants Yukio to meet. 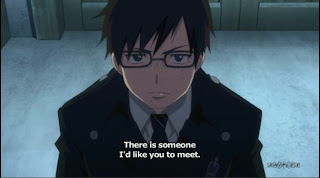 After the credits have rolled, Yukio is led onto a train. There he meets a man he never expected to meet. His name is Ernst Frederic Egin and he is the late Yuri Egin’s father. In other words, he is Rin and Yukio’s grandfather. 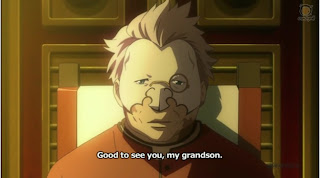 My Opinion
This was a decent episode. It had its surprises here and there though it was nice for the masked assailant to be attacking men for once. (That did not sound right) Many shows usually have the female companions of the protagonist being attacked. It’s nice to see the episode having a change of pace there. Seeing Rin being beaten very easily was a treat, it’s always good to see the protagonist struggling to win and even lose. It gets me in the mood to see them win the next time and Rin delivered on that promise. 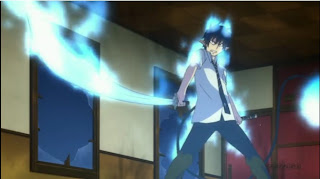 Badass style!
For those who remember me saying earlier here about the big surprise for Yukio, it was the revealing of he and Rin having a grandfather, a surviving family member. I’m not one for trying to get too much into the protagonist’s backstory but so long as this filler arc does not end up ruining my expectations and skewing up the imagery those who read the manga have had. 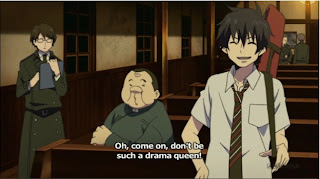 I also never thought that Noihaus would have been married. There was never any mention except he lost family and I have no idea how old he is compared to back then. Just my two cents on this. 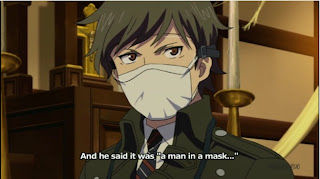