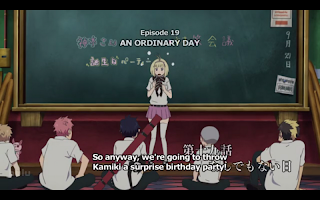 Introduction
Finally, a filler that’s nothing but true filler, as opposed to trying to have a larger story. For those who may have been spinning from the last episode, this episode will be a relief to you. For those that think I was harsh in my last review, that is just how I felt about it. This episode’s title sums up what it is, just an ordinary day. 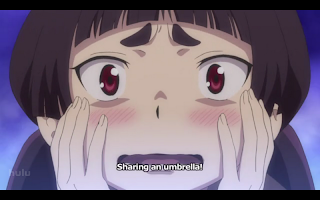 An ordinary day of hilarity. -The Editor

Plot Summary
Shima asks Shiemi and Izumo for their birthday and blood type. With this, he can tell girls their fortune. Rin asks for his fortune only to be turned down as Shima tells him that it only works with girls. While the two get into a silly argument, Shiemi notes that Izumo’s birthday is coming up soon. 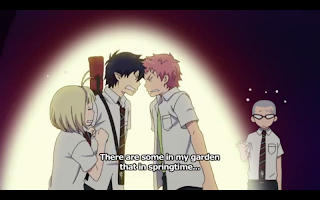 Shiemi asks for help from the boys to throw the birthday party as they all offer suggestions. Some hilarity ensues as Suguro gains control and orders Shima to buy the birthday present, Rin to make the cake with Konekomaru being in charge of shopping and Rin’s advisor, while Suguro and Shiemi make the decorations. 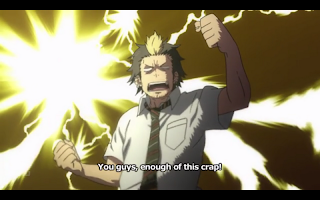 Shima goes to find Izumo’s friend, Paku, starting a series of misunderstandings on the part of Izumo. Izumo finds Shima and Paku hanging out with each other on the school fountain. She finds Rin and Konekomaru in the library as both bolt from her. Lastly, Izumo finds Suguro and Shiemi working on the decorations as they too bolt from her. 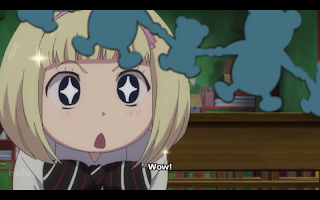 Izumo asks Paku if she is seeing Shima but Paku tells her no. Meanwhile, Konekomaru watches Rin baking the cake and remembers the Gufu incident. He goes back to helping Rin with the cake and is able to feel a bit more at ease around him. 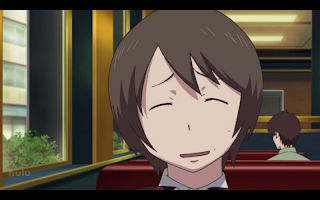 At her family shop, Shiemi is visited by Yukio who came for his own personal items. The two have a discussion about birthdays and Yukio mentions how he and his brother’s birthday is after Christmas and that they never experienced an actual birthday party. 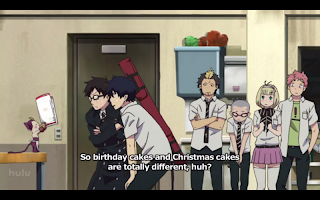 Rin and Konekomaru show off their cake to the others. Suguro points out it is wrong and so does Shima. Yukio agrees with Rin that it is a perfect birthday cake only to realize that a Christmas cake and birthday cake are two very different cakes. The Christmas cake gets sent to Mephisto Pheles who takes a bite of it and exclaims his approval of it. 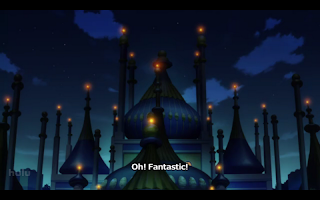 I really love Mephisto’s seiyu. -The Editor
Shima and Paku meet up to go shopping for Izumo’s birthday gift, as said girl starts following them in a disguise. She follows them under suspicion that they may be going out, letting her imagination get the best of her. Eventually she is found out and questions them on whether they really are together. Shima lets out that they were just buying her a birthday present. 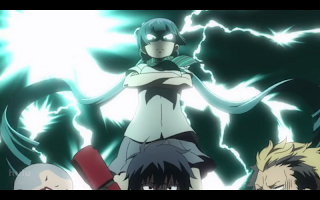 Shima reveals to the gang that they have been found out by Izumo. Izumo tells them she is angry that she is being used as an excuse to have a party which Shiemi apologizes for suggesting. Izumo then says it’s wrong for her to have a party when the others whose birthdays have passed haven’t had one. Soon everyone comes to the agreement of having the party for all of them. 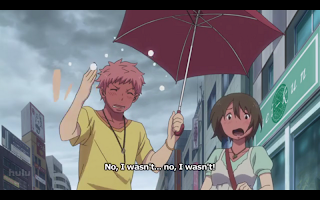 After they’ve prepared yet again, the day comes only for Rin to accidentally knock the cake over. Luckily Konekomaru’s reaction time was fast and he catches the cake, preventing it from hitting the ground. 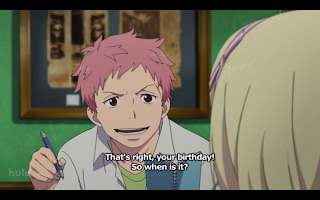 While Shima is busy handing out presents, Shiemi goes to check on Yukio who tells them that he and his brother do not know when they were really born as Fujimoto only made up their birthday. All they do know is that they were born sometime during winter. After this talk, Shiemi and Yukio head on to join the others in the birthday gifts handout. 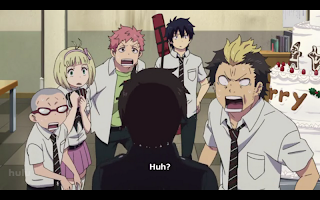 My Opinion
I loved this episode because it had nothing to do with the actual series. The fact that the characters acted a bit out of character can be forgotten once you notice that they actually were pretty in character. Though I admit that Izumo’s was taken over the top. This episode had funny moments and it was a nice change of pace from all of the drama that have been unfolding lately. I see this episode as a chance for the animators to relax and let them and their viewers breathe for half an hour. I have too many favorite parts in this episode but the one where Mephisto ate the cake, takes the cake. Literally. 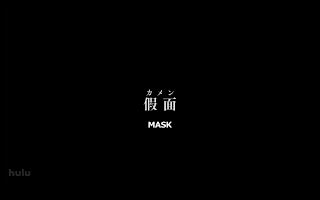