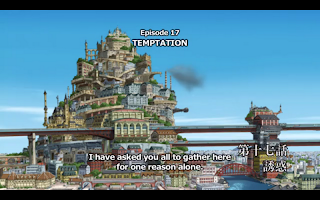 Introduction
The trial of Mephisto Pheles is interrupted by Amaimon coming to attack Rin. While other exorcists try to stop the King of the Earth, the Grigori’s only hope may be that which they seek to condemn. 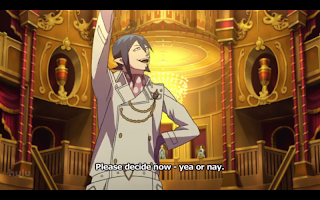 The Grigori are terrified of Amaimon, so they ask Mephisto for help. His response: That they command him to release the son of Satan, and use him as a weapon against Satan. Meanwhile, random Exorcists, Shura, and Arthur are trying to stop Amaimon. 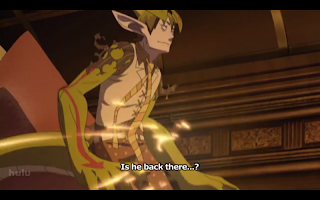 Their efforts are fruitless as Amaimon blows through them and finds Rin. He frees Rin from his imprisonment in the crystal, while trying to destroy him. The Grigori finally give in and ask Mephisto for help. Suguro enters the courtroom with the repaired Kurikara. A game of cat and mouse is played with the Esquires as Yukio gets the sword to Rin, who defeats Amaimon without much effort before passing out. 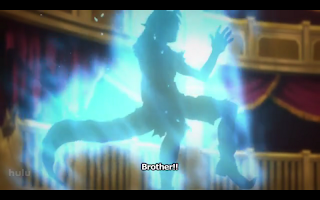 It was actually kind of ant-climactic.
Arthur appears to finish off Rin, but the Grigori stop him, saying that they have accepted Mephisto’s gamble. 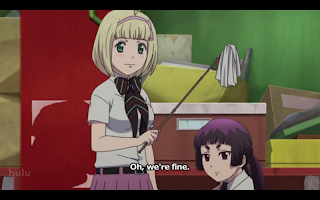 Rin is now under the watchful eye of the Vatican. There are two conditions: If he can pass the Exorcist Authorization Exam in six months, then the Vatican will be able to trust him. The second condition is that he is to be under 24-hour surveillance by Shura and Yukio. 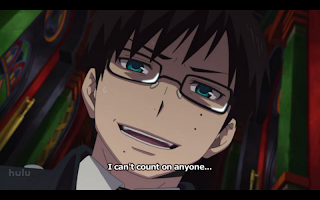 The next day, Rin enters the classroom to see his fellow Esquires trying to eliminate the weakling demons. He tries to help out in his own way but this frightens them. Of them all, Suguro, Shima, and Konekomaru are none too fond of finding out that the son of Satan has been schooling with them under their noses. Rin is then taken out of the classroom and given a new curriculum: Flame Control Training. 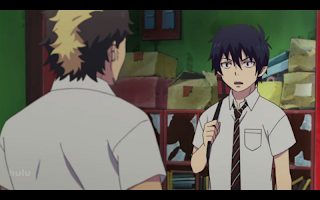 His test: to light two out of three candles without lighting the middle one. Shura tells Rin the reason he lost control was because he was scared. After leaving Rin to his own devices, Shura challenges Yukio in the batting cage with Yukio making a bet that if he wins, she will stop calling him names all the time. 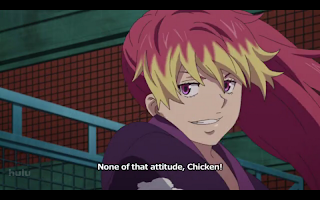 Rin gets frustrated, watching how skilled the two are and ends up accidentally burning off everything but their underwear. This act infuriates Yukio, and while he is putting on his coat there is a sign of a possible demonic infection. 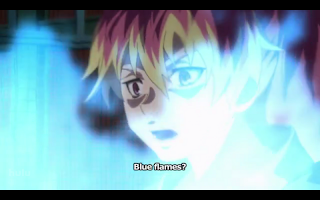 Konekomaru approaches Suguro who tells him that after all that has happened, he cannot afford to fail now, knowing Rin’s real reason for wanting to beat Satan. Suguro isn’t scared of Rin being the son of Satan yet Konekomaru is. He ends up meeting a strange spirit clad in shadows that takes advantage of his fears to possess him. 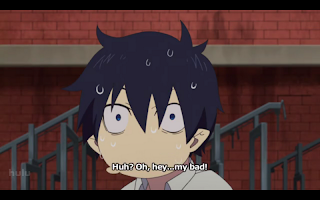 Izumo finds Rin training with his flames. She tells him about the time her friend was attacked by ghouls and how she lost face with her summoned spirits, which caused them to turn on her. She tells Rin that he has to not let his powers frighten him and that there is nothing wrong with having a bloodline related to that of a demon. She also tells him that it isn’t all that uncommon for Exorcists to have some demon blood in them. After Rin thanks her for firing him up, he is suddenly attacked by the same demon spirit Konekomaru was approached by as the episode ends off with it attacking him. 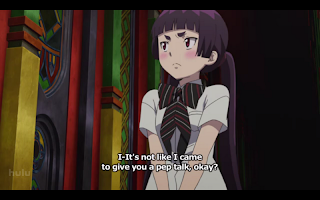 My Opinion
This episode was thankfully without much filler. I liked this episode. And while I do enjoy fanservice, I need to be frank: I don’t think the addition of Shura was needed or rather, her state of dress is not needed. As Derek mentioned, it was good of Kato to make Shura twenty-six rather than eighteen so Shura isn’t another teen girl with an impossible body. She’s the right age for that kind of body. I’m one for animated breasts, I will not hide that. But sometimes it can just get to be a bit much, especially after seeing Shura in that short purple kimono. No! No screenshots! -The Editor
I loved how animated Mephisto was in this episode. The way he moved his arms, it was like he could come alive. I do believe that Mephisto doesn’t care whether or not Rin becomes the savior or destroyer. The man appears to have his own plans, feigning ignorance at Amaimon’s existence in the human world. 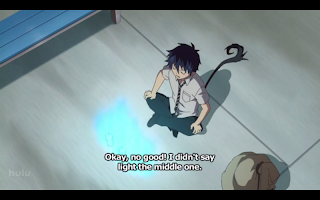 Rin’s training appears to look like something that would take days if not months to accomplish. There is no other gripe I have with this episode except for Konekomaru. I’m going to be quite honest: he’s boring. I understand he’s just scared, more scared of Rin than anyone else, as his parents were victims of the Blue Night. But to watch him be approached by that black demon and leave me assuming he was possessed by it. That’s a bit much. Am I the only person disturbed by the demon rape implied by Izumo? She said that it isn’t uncommon for Exorcists to have demon blood. Exorcists and demons are enemies. There’s only one way I can imagine their blood mixing. And it’s kind of disturbing. -The Editor 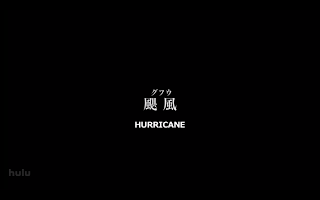