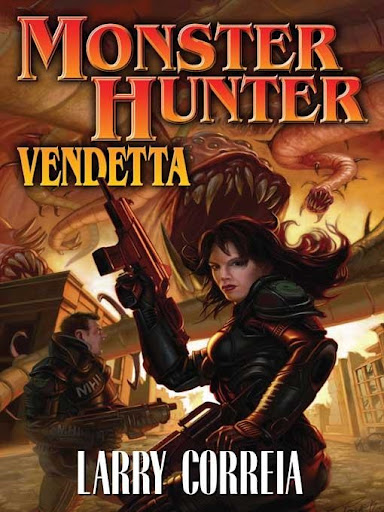 Last week I took a look at Monster Hunter International by Larry Correia.  This week I’ll be looking at the sequel, Monster Hunter Vendetta.  Compared to its predecessor, this novel shows marked improvement in all aspects.  Characters are further developed, the action is bigger and better, the plot is more inventive than the first book, and I even got teary eyed towards the end.  The last one is not something I thought would happen, even after I loved the first book so much.  But I’m starting to think Larry just loves to take preconceptions and twist them around.  In fact he’s said as much during conventions I’ve seen him talk at.

The plot starts with action, Owen’s team are hunting down a chupacabra pack.  It them moves into more action, as their hotel is attacked by zombies.  After that there is a little bit of down time, up until Owen’s vampire in-laws pay him a visit in Mexican Prison.  And then the Feds break him out.  And then there’s the concert that is attacked by Oni, and the all-out assault from the undead.  Yeah.  If there is one thing this book isn’t missing, it’s action.  Delicious, scrumptious action.

Interwoven into the action is character development that I wasn’t expecting.  We get to meet Owen’s family, and get some back story there.  But we also get to know some established characters a little more.  And I don’t think I need to emphasize that the revelations are surprising and awesome.

While this review may be shorter than the last one, that’s not because this book has any less merit.  In fact I love this one even more than I did Monster Hunter International.  Very few authors are able to take a book so heavy in action, and make me enjoy it so thoroughly.  The reason MHV stands out so much more than its predecessor is because while both have awesome action scenes, MHV ramps up the action by a fair bit and brings pathos along for the ride.  I’m not afraid to admit it, I cried towards the end of this book.  Once because of a tragic moment, the second time because of a heart touching moment, and the third time because I’ve come to love all these characters, and sometimes a good death scene is the best part of any book.

The Monster Hunter series is one of those gems that needs to be read.  So rarely is a new author, one who hasn’t been trained as a writer or in any creative field, so well written and prolific.  Larry Correia has several more books coming out, with the first of his new series The Grimnoir Chronicles (doesn’t that name just shout “badass”?) already out.  I have not yet picked it up, I do not know why, but for now I’m blaming brain damage.  You need to be following Larry, I expect some amazing books from him in the future (even more amazing than what he’s already written).

If you liked my review, Buy the Book Here:
Monster Hunter Vendetta (Paperback)