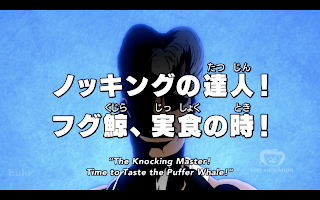 The gourmet hunter that kidnapped Komatsu throws him towards the devil python as a distraction.  But instead of going after Komatsu first, the snake attacks and kills the murderous gourmet hunter.  Komatsu searches through his backpack for the self defense firecracker/noise maker and ear plugs Toriko gave him.  He gets knocked around and drops the ear plugs, so he is forced to set off the cracker without protecting his ears.  The resulting bang shatters his ear drums and stops his heart. 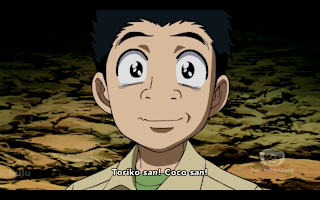 When Toriko and Coco, following the sound of the blast, find him however they find him in near perfect health.  Komatsu tells them about the giant old man who saved him from the devil python, and patched him back up.  Toriko and Coco speculate that it must have been Knocking Master Jiro, a legendary gourmet hunter whose full course menu is filled with items most people don’t even believe exist.  They also figure out that it was the same old guy that Toriko gave some of his booze to on the train. 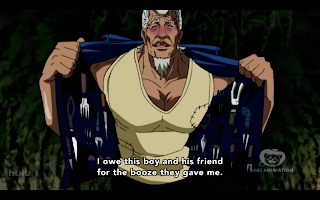 With the group back together they head to the cavern lagoon, where Toriko and Coco dive in to the water to find a shoal of puffer whales.  Toriko tries his hand at capturing one, but the lightest touch ruptures the poison sack and renders the fish inedible.  Coco shows him how to properly erase his presence and use a special knocking gun to shoot it through the gill.  Toriko imitates Coco’s behavior, except her uses a modified version of his fork to stab one of the puffer whales. 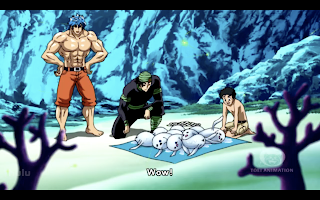 They manage to get about ten of the whales, and after failing to extract the poison from one of them, Coco has Komatsu–whose hands are a bit more steady–to prepare the rest.  Coco coaches Komatsu through the process, and with the tenth, and final, puffer whale, they manage to get it open and remove the poison sack. 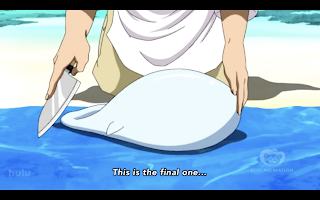 And finally the payoff.  I don’t know why it’s so enjoyable watching cartoon characters eat cartoon food, but the more I think about it, the hungrier I get.  Makes absolutely no sense, but still, I’m hungry now. 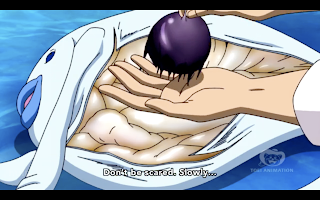 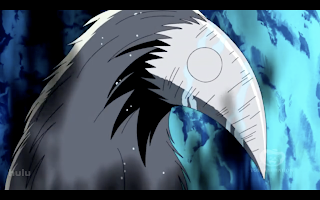 As far as payoff episodes of an arc go, this one was one of the better ones overall.  I don’t know what it is, but with Toriko you don’t just have the payoff of defeating an enemy, you also have the pay off of finally getting the food the characters were after.  And while it’s been a while since I had proper sushi, I have to say that puffer whale looked delicious.  Though it does have the advantage of the poison being noticeable.  I don’t think I’d risk it with the real world analogue.  Too many people die eating puffer fish.  And even if the numbers I’ve heard are exagerated, it’s still too high.  I tend to prefer my food non-lethal.  But I guess fish like that would appeal to people that like Russian Roullete. 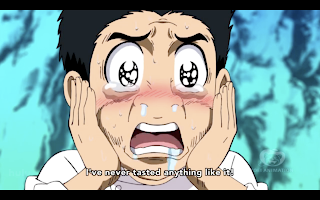 A notable part of this episode is two moments where it varies from the manga.  There is a fair bit of minor variation, what with Toriko succeeding in catching a puffer whale on his second try here, as opposed to failing even once he gets the handle of how to properly catch the whales.  The biggest change however is that the anime has Toriko giving Komatsu earplugs, and then Komatsu losing them.  In the manga Toriko never gives Komatsu those earplugs, and Komatsu dying is literaly Toriko’s fault.  Because he didn’t consider that anything loud enough to scare off monsters, would probably be loud enough to kill a human instantly.  Another, smaller moment, is when Komatsu asks Toriko to get the ingredients he needs to treat Jiro to a feast as thanks for saving his life.  In the manga Toriko flat out refuses, in the anime he runs off ahead without hearing what Komatsu said.  So instead of being a lethally thoughtless jerk, anime Toriko is instead more just thoughtless, and not so much of a jerk.  Since I assume the anime is aimed at a younger audience than the manga, I’m not sure how that works, but anime adaptations tend to cut down on violence and fix minor unlikable character traits.  Or maybe they thought that this early on in the game for the anime they wanted to make their main character more likable. 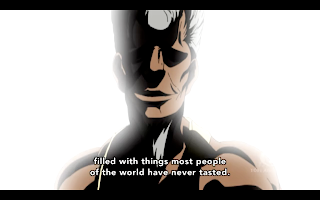 Whichever it is, this episode is not only a great pay-off episode, but it also sets the stage for further conflict. 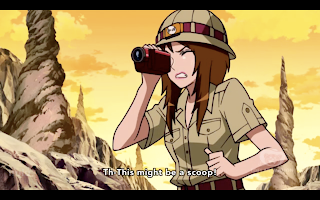