I absolutely love Twitter.  People can make fun of it all they want, but when I find out about something like THIS because of Twitter, then it has my love forever. If it were legal I would marry Twitter.  But since that is impossible, I proposed to Funimation instead.  I have yet to hear back from them.
As you’ve probably already guessed from the title of this post, Funimation has officially picked up Fairy Tail. They will be releasing the first 48 episodes, the entire first season, in the fall of 2011.  Not much information is available at this point, and according to Anime News Network, only one cast member has been announced–Todd Haberkorn will be lending his voice to the role of Natsu.  According to the same article, Funimation has already started dubbing the series.  So at least those of us that have had the misfortune of taking a gander at the Animax dub can finally begin the healing process.
Not much can be said without more information, so all I can really do at this point is address the choice of casting Todd Haberkorn as Natsu.  I have to confess that I have only seen a few shows that he’s been in.  But from the little of him I have watched, I believe the role is in good hands.  Besides playing Ling Yao in Fullmetal Alchemist: Brotherhood, he’s also played Kazuya Shibuya in Ghost Hunt, Haruo Nijima in Kenichi: The Mightiest Disciple, Koza in One Piece, Hikaru Hitachiin in Ouran High School Host Club, Keroro in Sgt. Frog, and Kimihiro Watanuki in xxxHolic.  And these are only from the ones that I’ve seen.  Given this sample I can definitely say that the comedic scenes, as well as the serious ones, are in good hands.
So far things look promising, and while there isn’t much to go off of from this announcement, that really isn’t the real point.  What’s really important is that little moment when every Fairy Tail fan that has been hoping for this first read the news.  That moment where even the most sober of us let out a little squeal of joy after seeing the website for the first time.
Speaking of the website, in case you have not yet had a chance to see it yet, Here It Is!  Again, there isn’t much to go off of, other than that Fairy Tail will be coming in Fall of 2011.  I don’t know if they’ll be putting any episodes up on the site, and given that Crunchyroll has all ready been simulcasting the most recent episodes I can’t imagine that Funimation will be starting their own simulcast.  Which is a shame for those that like not paying to watch anime.  In other words, the entirety of anime fandom.
As for those of us that like to buy anime DVDs, this news is so good that it even made my long day at work infinitely better.  We’re going to be getting the entire first season in one go it looks like, and hopefully it will sell well enough that Funimation will pick up the second season.
I doubt that anyone will be hearing about this news for the first time off my blog post, maybe one day I’ll be big enough for that, but for now it’s good enough if we can all sit back and think about just how lucky we are that one of the best anime dubbing companies has picked up one of our favorite shows. 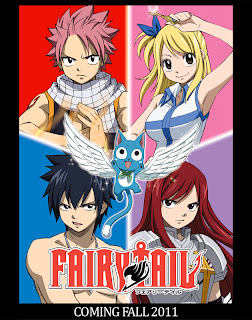