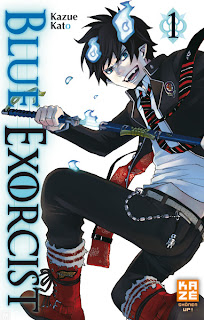 If you have read any reviews for this manga, then you are well aware that the first chapter is universally recognized as poor manga at best.  Anyone with any taste in manga says exactly this, so when I went into reading this I almost felt like it was my duty to hate the first chapter.  But after seeing the first episode of the anime, and liking it, I didn’t see how the manga could possibly be all that bad.

With the kind of build up that I just did this would be the part where I tell you that I broke the mold, tore myself away from the mainstream and found that I actually really liked the first chapter.

But since I’m playing this up for laughs I am here to say that yes, the first chapter sucks.  And that’s not just me saying it because everyone else is saying it, or because I am going against expectations in a way you did not expect.  It is legitimately bad.  The anime goes out of its way to fix the main flaw that kills the first chapter of Blue Exorcist.  Namely, the pacing.

Good pacing can have readers frothing at the mouth as plot twist after plot twist is pulled on them on a weekly or monthly basis.  Just ask Eiichiro Oda and Hiromu Arakawa.  Bad pacing can take an otherwise good manga and turn it into an absolute drag to read.  Just ask Tite Kubo about his later work.  When it comes to a series killing first chapter, look no further than Kazue Kato’s Blue Exorcist. A tale that proves that sometimes not knowing your birth parents is a blessing.

Bad pacing comes in many forms, sometimes not enough happens, and sometimes too much happens.  When what should be important panels take up less space on the page than a panel of the character closing a door, then something needs to be redone.  Far too many events are crowded into not enough space, and as a result the audience is unable to build an emotional attachment to the main character and so what should be having an emotional impact instead comes across as about as interesting as reading a history book.

Which makes the second and third chapters all the more surprising.  Now that there is finally some down time we get to see more of what Rin is like as a person.  We also get a closer look into Yukio’s character, in fact his reaction to Father Fujimoto’s death forms the main conflict for the second chapter.  The main difference is that by that point I care.  The characters are fleshed out, and the conflict stems from their personalities, rather than outside influences.  And as any writer worth their salt can tell you, character driven conflict is always best.

Rin and Yukio’s relationship promises plenty more enjoyment to come from this series, as from what I can tell they are set up as a traditional owarai kombi duo, with Rin playing the part of the boke and Yukio playing the part of the tsukkomi.  Rin’s reaction to being asked for help in the third chapter is a particular moment where I laughed out loud.

I also enjoy the little asides of dialogue that don’t have anything to do with the plot, but add some characterization.  Such as, “I like women who are temptresses, but…” “What a coincidence.  So do I.”

Speaking of characterization my favorite moment of characterization was also my favorite moment for subtlety.  Mephisto (I really can’t type that name without thinking of Diablo II) comments on how well Rin ties his tie.  Now why did he mention that?  Does he know about how Father Fujimoto taught Rin to tie it?  Is that just a quirk of his personality that he comments on the most random things, or is he trying to get a rise out of Rin?

If there is one thing I liked from the first chapter it was the demon designs.  It isn’t often that I see a manga where the possessed form of a human is hardly different from the regular form, with the exception of horns, fangs, pointed ears, etc.  The demons in the last two chapters just come across as goofy.  Perhaps I’m biased by a lifetime of reading Epic Fantasy, but when I think of goblins I do not think of a sphere.

I echo Katherine Dacey’s sentiment that Kato does some amazing background art, but can’t help but wonder if she will end up putting less focus into complex backgrounds, much like Masashi Kishimoto’s later work (seriously, look up the early chapters of Naruto the backgrounds are astoundingly complex).

As far as the book’s layout is concerned, I am pleased to report that enough space is left along the inside sides, so that I don’t have to break the spine to be able to read the dialogue.  I don’t know if this is because of Viz, or Shueisha, but whoever puts these volumes together knows what it takes to make reading manga enjoyable.  Also, having the content page on glossy paper is a nice touch.

On a final note, if you want to fully enjoy this book I’ll give the same recommendation as David Welsh did in his review of Blue Exorcist.  Skip the first chapter, there really isn’t anything in it that won’t be explained later on.  I’d also like to add my own note to that recommendation.  If you still want to get the entire story, rather than relying on what happens in later chapters, then I suggest watching the first few episodes of the anime.  It covers the exact same material, but paces it out much better, and gives explanations for certain events that aren’t quite explained in the manga.  As of now I have not yet watched the second episode, but since the first episode covered half of the first chapter I imagine that the second episode will cover the rest.  So if you don’t want to watch the whole anime (don’t see why you would want to do that, it’s really good), then all you need to watch is the first two episodes and you should be up to date on what you missed by skipping the first chapter.

If you liked my review, Buy the Manga Here: Blue Exorcist, Vol. 1

And if you’re feeling French, why not pick it up in the language of romance?
Blue Exorcist, Tome 1 (French Edition)