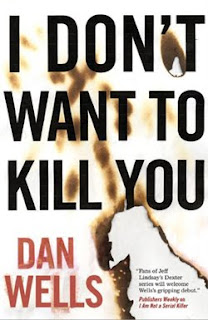 After meeting Dan Wells in person, I determined that the title of his current book is telling the truth.  Maybe.

Sometimes you run across a series that you never would have read in a million years, if not for extenuating circumstances.  But once you do read it, you find a place in your heart for it that you didn’t know was open.  That’s what the John Cleaver series is like for me.  I was first introduced to Dan Wells through the Writing Excuses podcast, which I was listening to because I was taking Brandon Sanderson’s creative writing class at the time.  Who I happened to know about because I picked up a copy of his first book, Elantris, from the campus bookstore bargain bin.  It must have been some kind of fate (corny as that sounds), because I normally don’t buy books on a whim like that, even bargain bin books, but the blurb on the jacket cover interested me that much.  Then I later found out that he was finishing The Wheel of Time series, one of my all-time favorites, and the sole reason I had no social life during high school (have you seen the size of some of those books?  It took four years of dedicated reading to get through them).  So one thing led to another, and the moral of the story is: If you want your books published, then be on a podcast with a bestselling author.

It also helps if you’re actually a good writer.  Which is exactly why I got into the John Cleaver series.  I picked the books up because after hearing so much about them on the podcast I thought the premise sounded really good.  But what kept me reading was the fact that I Am Not A Serial Killer was genuinely well written.

It’s been three years since then, and now we find ourselves faced with the end of a trilogy, the final chapter of the tale.

The plot revolves around John discovering a new serial killer who has come to his home town.  Much like I Am Not A Serial Killer and Mr Monster he has to figure out how the killer is working and why he does what he does.  What sets this book apart from the others is that unlike I Am Not A Serial Killer, he doesn’t know who the killer is until the very end.  And unlike Mr Monster, the creepiness factor is toned down in favor of character development; until the very last scene that is, which is creepier than anything else Wells has written for completely different reasons.

Reading I Don’t Want To Kill You is a lot different than reading the other two books.  In I Am Not A Serial Killer the emphasis is more on gore, while in Mr Monster the emphasis is on the unsettling creepiness that pervades the entire book.  Unlike its predecessors, I Don’t Want To Kill You is focused a lot more on the mystery and John’s coming of age. The fact that this book is not nearly as creepy or as gory as the previous two can be both a good thing and a bad thing.  John comes across as a much more sympathetic character in I Don’t Want To Kill You, but it looses the fear the reader had in the other two books that John could possibly give in to his urges.

With the conflict of John’s ambiguous moral nature mostly removed, until the climax that is, the book reads much more like a straightforward mystery.  Which is not a bad thing in the slightest, since the mystery is actually very compelling, and manages to throw in a few good plot twists.  In I Am Not A Serial Killer we knew from very early on who the killer was.  In Mr Monster Wells gave us more of a mystery and threw in a good plot twist.  In I Don’t Want To Kill You he perfects his mystery formula, by keeping you guessing throughout the entire book.

While this book is a pretty quick read, it is also a pretty leisurely read up until around the half way mark, at which point the plot threads start coming together and anyone reading will be reading the entire rest of the book in one sitting.  Consider the first half build up, and the second half payoff.  Whatever you do, don’t spend all night reading the first half in one go, because you will end up reading the entire book until six AM.  Trust me, I have the grades to prove it.

The biggest appeal about this book is being able to see John in a new setting.  For me there was a lot less horror in this book, and a lot more coming of age.  The climax of the novel had plenty of horror in it, as it tears the reader between hating and loving either possible outcome.  At one point it seems like there is literally no possible way for a satisfying conclusion.  After an entire novel feeling comfortable with the fact that John has gotten beyond his killing urges, suddenly he is thrust into a situation where it may be impossible for him to avoid breaking this taboo.

The aftermath of the climax however is easily the weakest part of the book, as it not only introduces the possibility of more sequels, that will never come, and wraps things up a little bit too neatly.  I’m not sure exactly how to explain it, and I can’t go into too much detail without giving anything away, but I’m sure anyone reading it will know exactly what I mean.  Because of this I am conflicted about this being the last John Cleaver book.  On the one hand I can see how it would get difficult to support more than a trilogy; while on the other hand the ending sets up a premise that I want to see more of.

So while I Don’t Want To Kill You isn’t quite as edgy as its predecessors, it does prove that Dan Wells can write a compelling story that does not rely on the novelty of the protagonist.   Not that I have any complaints against what he did in his first two books, but I think that this book is an important stepping stone to show any hesitant fans that he won’t fizzle out after this series.  By showing he can write a book that is just as compelling as his previous books, by not relying as much on the same concepts, Dan Wells has shown that his upcoming books will be just as good as his debut trilogy.