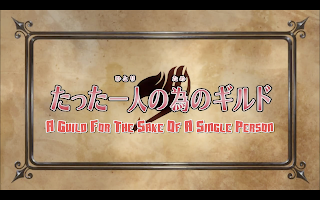 It occurred to me that every review following the last one would forever be biased by how amazingly, awesomely entertaining episode sixty seven was.  I would say that you should never expect any good review for this series ever again, because there’s no way Fairy Tail has anything to offer after that amazing climax. 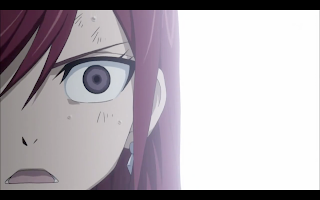 I would be wrong, were I to say that. 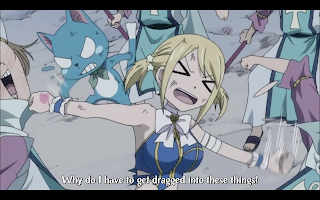 The episode picks up immediately where the last one left off, of course, with Jellal being arrested by the Council representatives.  He goes without putting up a fight, leaving Erza struggling on the inside.  If she lets him go, and he did commit all the crimes he is being accused of, then she will never see him again.  But before Erza can make a decision, Natsu starts a fight against the arresting officers, yelling that he won’t let them take Jellal, not after he helped them all stop Nirvana.  But mostly he’s fighting for Erza’s sake, because he knows that she can’t be separated from Jellal again. 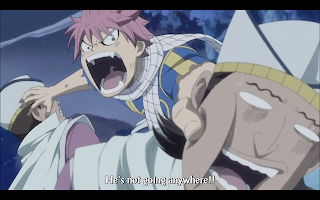 The rest of the group joins in the fight, and slowly the council’s overwhelming numbers turns against them, but before they can all be arrested Erza yells at them to stop.  She then tells the council that they can take Jellal away.  Jellal smiles, happy that she is allowing him to pay for his sins, and just before he is taken away he remembers, “Scarlet, of course, just like your hair.” 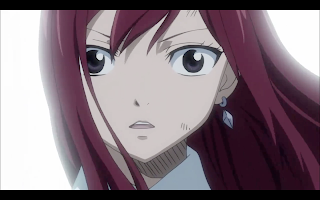 Later Erza goes off alone and remembers back to when she got her full name.  When she first met Jellal and her other friends her name was only Erza, and Jellal, thinking it a shame that she doesn’t have a last name, names her ‘Erza Scarlet’ after her hair.  “That way I’ll never forget it.” 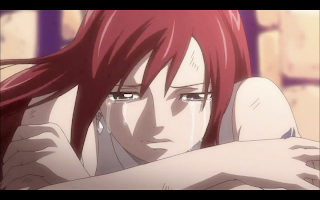 Later the group are back at Wendy’s village, and the women try on new clothes, since their old ones got destroyed.  Lucy tries to get Erza involved, to cheer her up, but naturally Erza isn’t interested.  Sherry comments about how she had never heard of Caite Shelter before the joint mission, to which Wendy states, embarrassed, that their guild really isn’t very famous. 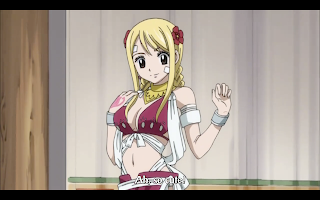 When they meet with Caite Shelter later the guild master reveals that they aren’t the descendants of the Nirvit, but that they themselves are the Nirvit.  Or at least that he is, and he was the one who built Nirvana four hundred years ago.  He gives the story about how Nirvana was their home, but all the evil that it absorbed found its way into the hearts of the people and they destroyed themselves in a bloody civil war. 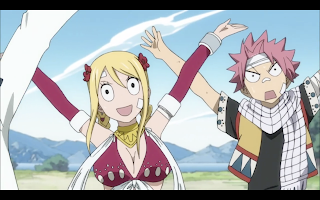 The master tells them about how he has existed as a ghost since then, always waiting for someone who could do what he could not.  For someone who would destroy Nirvana.  Now that the deed is done, he no longer has anything binding him to the mortal world, and all the guild members, illusions that he had created for the sake of giving Wendy a guild, begin to disappear. 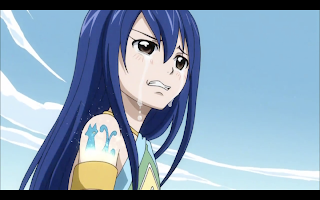 As the illusions disappear one by one, leaving only the guild master, who returns to his final rest, they leave behind Wendy, who cries for them all to come back.  In the end Wendy is left without a guild, and Erza, who can relate to her – having just lost a loved one as well – comforts her and invites her to come join Fairy Tail. 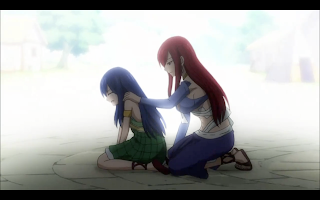 The episode ends with another recap of the arc, and given the incredibly bitter sweet tone of this episode and the end of the arc in general, the mellow, introspective music has never felt more appropriate. 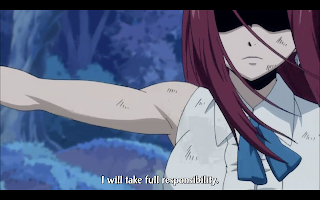 One thing that I’ve been noticing during this arc, and these later episodes in particular, is that I keep hearing a certain theme that I swear sounds like it was inspired by the Dragonheart soundtrack.  As well it should be, that movie had an excellent score that could easily fit inside this series. 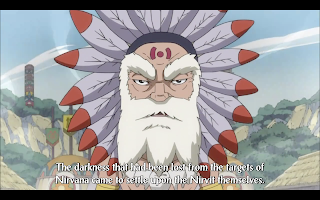 If last week’s episode was a pure adrenaline rush of a climax, then this ending is the most bitter sweet of endings I have seen out of this series.  And it works, very well.  Some might think that the bit with Wendy’s guild not being real and leaving her might feel tacked on, but I think it works well, and Wendy’s pain at loosing her friends compounds the pain that Erza feels after loosing Jellal. 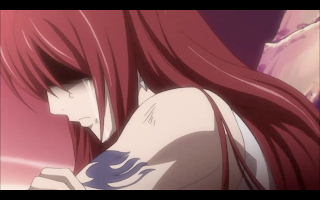 Judging by the episode preview it looks like we’re going into filler next week.  Which I personally think is a good thing, since there are only two arcs in between where this arc ends and the most recent manga chapters.  I want the Fairy Tail anime to keep going, and it looks like it is not only popular enough, but has enough heart put into it that I doubt it will be ending any time soon.  So it looks like we’ll be getting a bit of filler for the foreseeable future.  Again, like I’ve mentioned before, as long as they either don’t over do it, or at least give us well written filler – in which case I fully support an entire arc of filler in order to give Mashima the needed time to get ahead – then I fully support the current course. 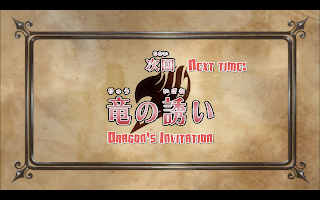