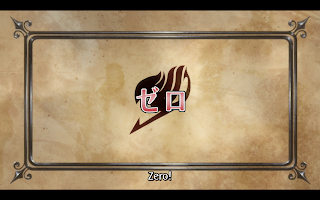 Erza and Midnight’s fight continues, with all of Erza’s sword strikes missing.  Then she lands a painful looking palm strike and sends Midnight flying into a wall.  Erza reveals that she has discovered two fatal weaknesses in Midnight’s power.  The first being that he can’t affect human bodies, only magic and inanimate objects, and the second that he can only use his magic in one area at a time.  Either to attack his opponent, or to deflect their magic and weapons.

With his weaknesses revealed… 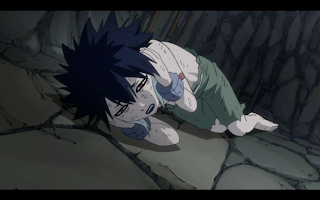 Midnight releases his full power and turns into a monster.  The entire scene makes creative use of colors, namely the color red, and is effectively nightmarish.  Monster Midnight eats Jellal, and then bombards Erza with images of her past.  He reveals that he himself had been a prisoner in the Tower of Paradise at the same time as Erza.  He’s about to devour Erza when she attacks him, and breaks the illusion.  Turns out that illusions don’t work on her artificial eye. 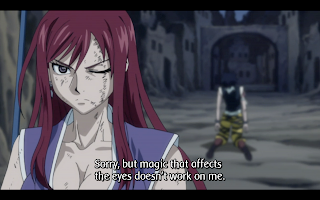 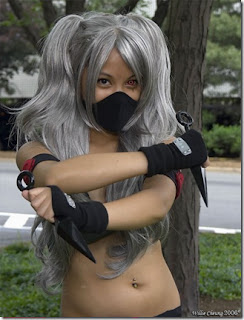 Midnight cries for a bit, and then passes out.  Good riddance, I can handle creepy, but not that kind of creepy.

In the meanwhile Natsu and group are fighting the staff, who is surprisingly competent for a skull on a length of wood. 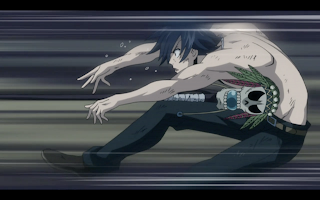 After some shenanigans the skull realizes that with Midnight gone Brain’s alternate personality, Zero, the incarnation of all of Brain’s destructive desires, is awakened.  Zero finds Natsu and the rest, and proceeds to destroy them, fortunately since this is a shonen adventure show he doesn’t actually murder them, so they’ll be fine. 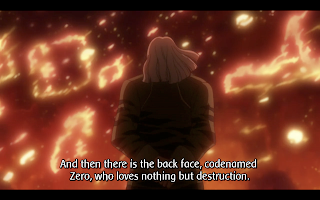 Zero heads up to Nirvana’s control tower, and finally the lumbering weapon of destruction reaches Caite Shelter.  The episode ends with Nirvana preparing to fire. 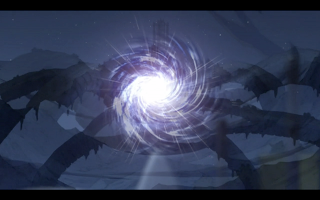 This episode was a lot of fun, not only is it nice to see how well foreshadowed Zero was over the course of this arc, but he’s also a very real legitimate threat.  Granted Natsu is going to beat him, but the fact remains that even though he is a pretty cliche “embodiment of evil” he’s still a lot of fun to watch just because of how easily he beats the heroes.  Watching him go down will be fun. 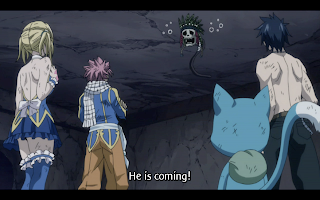 Also, am I the only one that thinks it’s a little weird that Brain turns white when he becomes more evil? 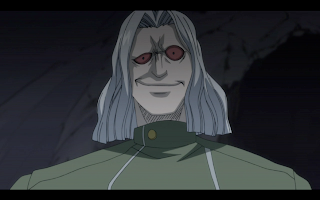 Erza’s fight was awesome, I love seeing characters outsmart their opponents, especially when it is one of my favorite strong female characters in anime.  The pacing is very well done as well.  Far too many shonen action series can’t get the pacing right, either making the fights too long, or too short.  In this case the fight was just perfect.  As a character Erza has moved on from her self doubt from the Tower of Paradise Arc, and has become an even more powerful kicker of ass. 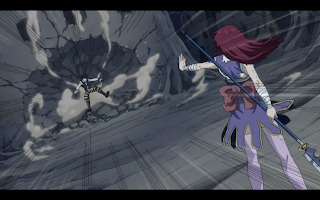 If the rest of this arc is as high quality as this episode then I think I can forgive Mashima for that Racer fight. 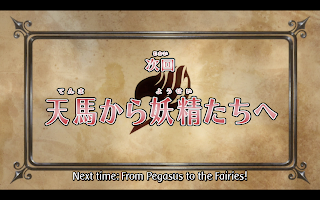