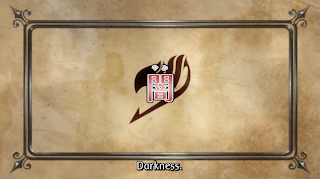 Sherry does not take Lyon blowing himself up very well, and the scene with her ends with her making scary eyes at Gray. 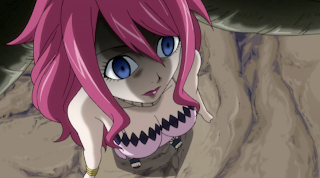 Jura fights Hoteye, the two earth magic users facing off.  Hard earth vs soft earth.  There’s a joke in here, but I can’t figure it out. 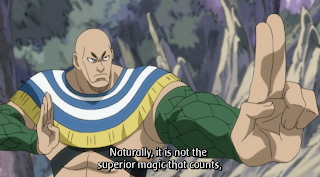 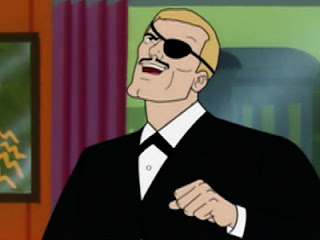 Natsu brings Wendy to Erza, who is being watched over by Hibiki and Lucy.  Natsu manages to wake Wendy up, who freaks out, and starts apologizing for waking up Jellal.  They manage to get her to calm down long enough to heal Erza, who immediately starts feeling better. 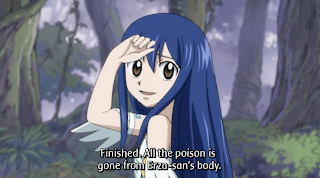 Jellal manages to find Nirvana, and unleashes it, sending a beam of dark light into the sky that starts to have an effect on Sherry. 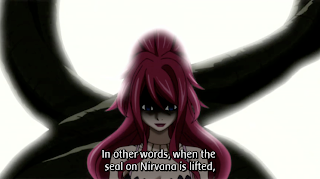 Natsu, after Erza is healed, takes off after Jellal, determined not to let Erza meet him.  But Erza wakes up, having heard their discussion about Jellal, and leaves while none of them are watching. 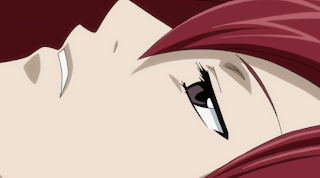 Hoteye starts getting affected by Nirvana as well, interrupting his fight with Jura. 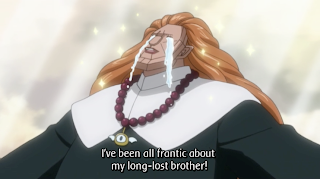 Hibiki knocks out Wendy, who is starting to be affected by her self-blame, and explains that he did in fact know about Nirvana.  Which of course begs the question as to why he didn’t say anything to the others in the team. 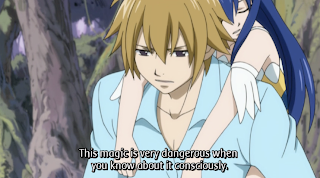 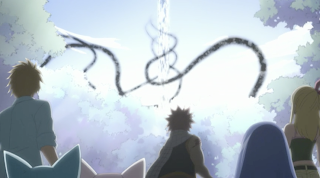 Hibiki explains that the magic switches light for darkness, and that it can switch those people caught between light and dark to the opposite of what they were.  So a good person feeling negative feelings will turn evil, and a bad person feeling good feelings will turn good.  Seems like this would be more of a risk to the bad guys, since no bad guy thinks they’re the bad guys.  Wouldn’t thinking they’re the good guys make them switch to really being good when exposed to this magic? 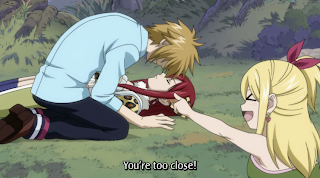 As if to illustrate the fact, Sherry attacks Gray, who she blames for Lyon’s death.

And Hoteye turns good, explaining that he was with the Oracion Seis so that he could earn money to help him look for his lost younger brother.  An interesting bit that those of you with a basic knowledge of Japanese (like me) or that have gotten beyond the language sounding like gibberish and can distinguish a few words will notice that Hoteye used to end all his sentences with “Desu ne”, which basically translates to “Is it not so?”  While when he turns good he switches to adding “Desu yo” at the end of his sentences, which basically means “It is so.”  Now, I’m no expert in Japanese, and I probably got those definitions screwed up.  But I think I got the basic idea, and while I don’t know the significance of this, it’s worth pointing out as a fun little fact. 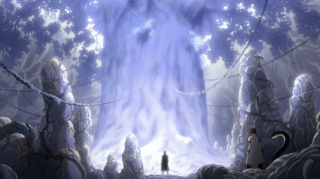 The episode ends with Midnight taking out one of the Blue Pegasus guild members.  Can’t remember his name though.  He’s the boy-loli one.  And it is revealed that the Oracion Seis will use Nirvana against all the lawful guilds if they get their hands on it. 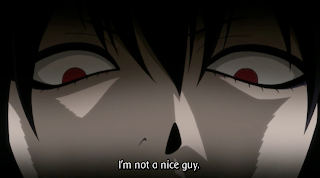 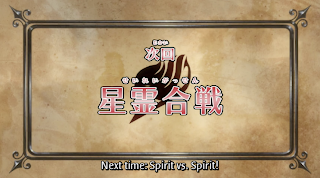