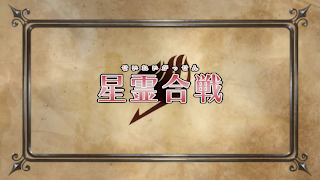 While trying to catch up to Natsu, they worry that Natsu’s rage will turn him evil.  Hibiki says that anger for someone else isn’t such a negative emotion, and that it shouldn’t turn Natsu evil.  Though both Lucy and Happy think that it wouldn’t make much of a difference to his personality even if he did turn. 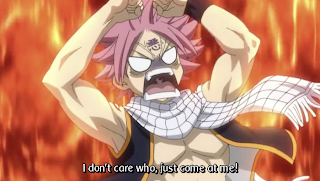 Natsu finds Gray floating in a river, face down, but when he goes to help him discovers that it’s a trap.  Gray traps Natsu on a raft, which incapacitates Natsu since it’s transportation.  Gray tries to finish off Natsu, but is stopped by Lucy and the others. 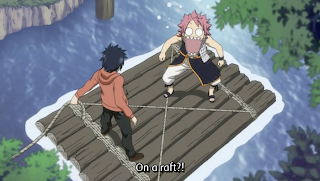 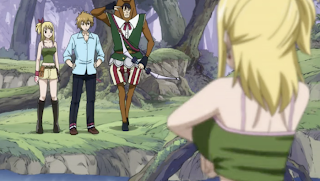 I could post that screenshot, but we’ve got a PG rating on this blog!

But sexual harassment isn’t the only power this new foe has.  Transforming into Lucy has given her the power to control Lucy’s spirits.  Even after Lucy dismisses Sagittarius, the fake Lucy just summons him right back, and this time there isn’t anything Lucy can do to stop him from shooting down the escaping Charle and Wendy. 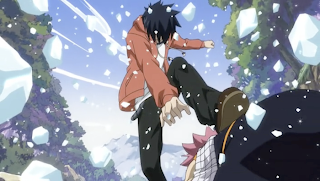 Fortunately the spirit’s owner Angel shows up, and for some reason or another tells fake Lucy that there’s no need to shoot Wendy down.  She reveals that fake Lucy is Gemini, who has the power to copy people’s forms, thoughts and powers. 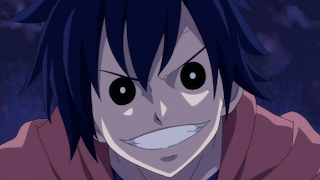 Lucy starts off strong with her most powerful, yet temperamental spirit, Aquarius.  But Angel proves to be more knowledgeable about the Spirits of the Zodiac and summons Scorpio, Aquarius’…boyfriend? 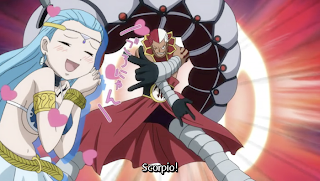 Having lost her strongest spirit, and being perceptibly boned… 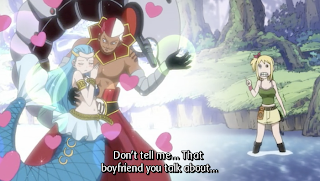 Not the only one who’s going to be boned. BAZING!  Wait…how would that work?

Lucy remembers that she has one more spirit even stronger, and summons Loke.  Then Angel summons Aries, Loke’s possibly girlfriend (it’s never really explained, all that is clear is that the two care about each other), and reveals that she was the one who killed Karen, Loke’s former owner, and surprisingly, Hibiki’s former lover. 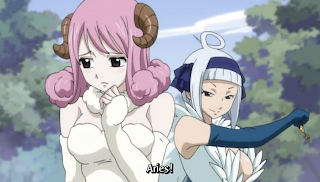 While Hibiki starts to struggle against the influence of Nirvana, after discovering who killed the woman he loved, Lucy finds herself unable to force Loke to fight against Aries.  The entire scene works well because of the multiple levels of tension.  On the one level is the immediate danger of Angel as a foe, and then there is the issue of Loke being forced to fight Aries, and Hibiki’s struggle against the dark influence.  Overall, well put together, and much better than episode 56. 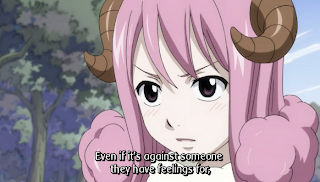 Loke and Aries both fight anyway, despite having feelings for each other (Aries’ words).  Lucy finds herself close to tears, watching the two fight, and finding herself unable to do anything about it.  Angel summons another spirit, the Chisel, also known as Caelum, and uses his beam attack to take out Loke through Aries’ body. 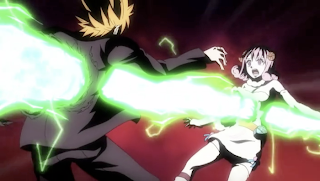 As the two disintegrate, forcibly returning to the spirit world, the reach out for each other, but dissolve into light before their hands can touch.  I’m a bit of a sucker for a tear jerker, and this one counts.  Oh boy does it count. 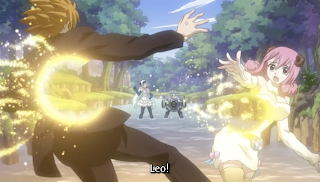 With Loke and Aries gone Lucy calls out Taurus, who is taken out by Gemini transformed into Lucy. 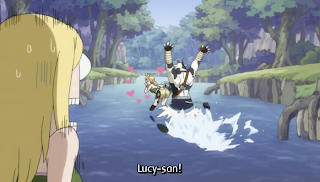 Lucy begs Angel to release Aries, so that she can be with Loke, making her the most adamant Loke/Aries shipper out there.  Lucy says that she’ll do anything, except give up her keys, if only Angel lets the two spirits be together.  Angel says in that case the price she requires is Lucy’s life, and orders Gemini to use Caelum, transformed into a sword, to kill Lucy. 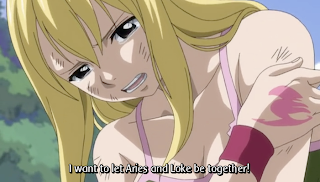 But Gemini cannot do it, as Lucy’s love for Celestial Spirits has reached the twin spirits, and made them unable to do her any harm.  The whole scene is beautifully put together, along with a wonderful new track, and prompts more than a few tears from me.  If you don’t cry a little bit during this episode, consider yourself hellspawn. 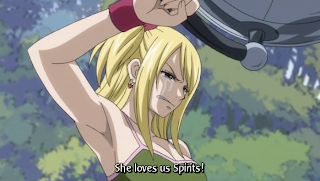 After Gemini leaves, Hibiki sneaks up on Lucy and puts his hands around her throat.  Angel laughs, seeing that the pretty boy has apparently fallen to Nirvana.  But then Hibiki puts his hands on Lucy’s shoulders, and tells her that he will give her a powerful spell just this once. 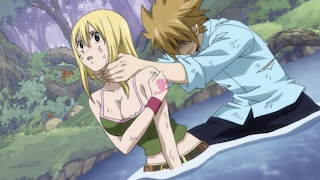 He uploads the spell directly into Lucy’s mind.  I’m not entirely sure what the spell does per-say, but it looks awesome, and Lucy’s voice is really eerie as she chants the incantation and casts the spell.  Overall a fitting climax for a well done and emotional episode. 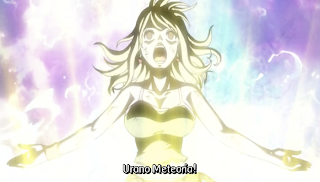 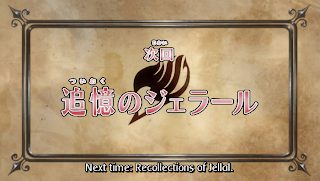