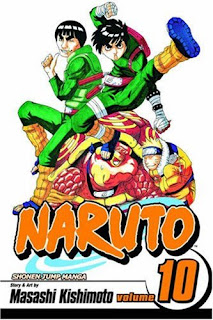 I was going to complain about the fights still going on for a third volume, but to be honest, the fights are the most interesting part of this manga, so I don’t think anyone could complain.  Or if they would complain the excessive fights won’t be the only part they complain about.

The battle between Lee and Gaara starts off poorly for Lee, as he is unable to penetrate Gaara’s sand defense.  Sakura wonders why Lee doesn’t use ninjutsu to attack from a distance, and Guy reveals that it isn’t that Lee won’t use ninjutsu, but that he can’t use ninjutsu.  However, instead of being a weakness, Guy claims that this is Lee’s biggest strength.  He calls out to Lee and tells him to remove them.  Lee then proceeds to remove a pair of ridiculously heavy weights from his legs. 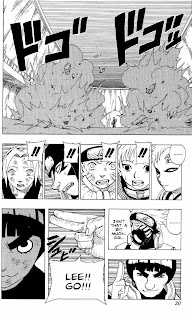 As expected, dropping the weights allows Lee to move at superhuman speeds, and almost get through Gaara’s defenses, and actually landing a few blows on him.  Guy explains how Lee’s inability to use ninjutsu or genjutsu, allowed him to focus on taijutsu, making him unbeatable when it comes to the purely physical aspects of combat.

Lee’s attacks crack the layer of sand that Gaara wears directly against his skin as an armor, and it is clear that Gaara is loosing control of his blood-lust.  As illustrated in the illustration that will haunt my nightmares. 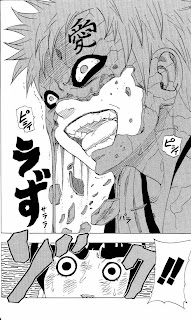 Lee uses the Fordward Lotus technique, and for a moment it looks like he’s beaten Gaara.  But the Gaara he was fighting is just an empty shell that Gaara slipped out of.  Lee turns around to find himself facing a pissed off Gaara, who is loosing control of his inner demon.  If that weren’t bad enough, the Lotus technique damaged Lee’s body, to the point where he starts to have trouble moving.

Guy flashbacks to when he first met Lee.  Lee was a failure much like Naruto, except that in many ways he was even more incompetent.  When Lee is unable to get strong enough to beat Neji, even though he trains four times harder than him, Guy tells him that while he may not be a genius at genjutsu, ninjutsu, or even really taijutsu, he is a genius at something much more important.  He is a genius of hard work.

Remembering this gives Lee the strength he needs to keep fighting, knowing that Guy is standing on the sidelines, cheering him on.  So, am I the only person who thinks that Lee would have been the better pick for protagonist?

Lee uses the reverse lotus, a technique that allows him to override his limits, by opening several of the eight gates, points along the chakra network of a human body that limits how much chakra is allowed to flow, in order to keep the body from damaging itself.  Consider it like this, the human mind places mental limits on ourselves that keep us from using the full power that human muscles can use.  From what I’ve heard the muscles in a single human arm are strong enough to lift several tons, which is where you hear the stories of adrenaline allowing people to lift insane amounts of weight to help someone trapped under them.  The muscles are capable of producing that much power, but the tendons and bones can’t stand the stress.  The eight gates are the same concept, only magic.

Lee beats the crap out of Gaara, but at the very end Gaara turns his gourd into sand and traps Lee’s left arm and leg, crushing them into uselessness.  Before Gaara can finish him off, Guy stops his attack, defending Lee.  By all accounts Lee should have won, but Kishimoto likes him some one trick, overpowered ponies.  Get used to it, it’s going to happen a lot.

After the fight the medics take Lee away, while telling Guy that with the amount of damage Lee took, there is no way he could become a Ninja again.

The fight between Choji and Dosu is anticlimax in its purest form.  Not much to say but that Dosu is a strong fighter, and Choji is kind of useless right now.

With that the fights come to an end, and the plot continues.  Which means I actually have to put some effort into this now.  Oh well.  Not really a good idea to be writing this so late at night, but I really, really need to get this done.  Ah heck, it won’t even ever be on the front page with how late I am.

What follows is far too much talking.  I really want them to get back to fights, but I really, really don’t have the focus I need to be able to read all of this now.  If it were interesting walls of text that would be another matter.  Volume 10 is essentially where at this moment I feel that I’ve lost interest in the series.
Like I mention, I might continue these, but right now I see little point in continuing to review this series.  Especially when I hardly see the point in reading any more of it.

Well, I hope you enjoyed these, because I’ve decided to take a break from my comedic Naruto reviews.  Sure I could keep doing these until I reach the timeskip, but as it is that would be adding too much work over what will be the course of my winter semester.  So instead I’m going to focus on reviewing more recent manga, in order to hopefully get some kind of deal set up with publishers so they send me review copies of manga I might otherwise not read.  Broadening my horizons might be good for me.

As it is, the Naruto manga at my local library isn’t going anywhere, and hoarding all the volumes I intended to review right now is going to get a little ridiculous.  So instead I’m going to put it aside for now, and pick them up when I have more free time, and possibly fewer weekly anime series that I review.  Starting in January I’ll be watching and reviewing the Beelzebub anime, so look forward to that.

I’ll probably pick these Naruto reviews up during the summer, depending on if I stay around home.  If I travel there’s no way I’m going to have several volumes of Naruto checked out, just waiting to trap me with late fees.

I’m considering trying something like this with other series, such as Bleach, or One Piece.  The Bleach reviews are a lot less likely, considering that I’m not as fond of the series as I once was.  One Piece is, and always will be, my favorite series, so eventually I will want to write reviews for the entire series.  Including all the manga and anime DVDs.  Despite the fact that such an undertaking will take forever to do.  Chances are I’ll have to play around with whatever my schedule is at the time.  As it stands I have a ton of reviews already lined up, and it isn’t like there’s ever going to be a shortage of reviews, whether I decide to continue to write Naruto reviews, or start up with One Piece reviews.

Before I do any of this though I intend to write reviews for the entire Fairy Tail manga series, considering that at the moment there are only twelve volumes released, and once I do that I can add it to the list of series I review when new volumes are released.  Chances are that I’ll be changing up the format for any reviews for old series that I do.  I’ve had fun with these Naruto reviews, but I’d like for the rest of my reviews to be more professional.  Anime reviews are a more likely source of comedic reviews from me at the moment, while manga will get a more serious approach.

So, I hope those of you that have enjoyed my Naruto reviews, please enjoy the rest of my work.  My number one goal for this blog is to entertain, and maybe educate just a little bit.  I may get behind on reviews, especially when I have a lot of school work.  And my planning is more ambitious than my motivation most of the time.  Heck, come January I’ll have a review posted five out of seven days of the week.  Really need to reconsider that.  Guess the problem is that I just like to have a large variety in what I write about.  So I need to set apart a day for book reviews, a day for manga reviews, and then however many days for my anime reviews.

Eventually though the series that I watch will come to an end.  Bakuman is actually going to end its first season this spring, though it has a second season coming out in the fall.  Which should free up a day for me.  I’ll probably end up filling that day with something or other.  I do know that I have a shelf full of anime that needs reviewing.  And not episode by episode reviews, which would just be insane, but reviews of entire series, which I’ve been wanting to do for a while.  Before I was distracted by my brilliant idea to review multiple series on a weekly basis.  Just watch, Fairy Tail is going to end up going forever.  And because I’m too stubborn to quit, I’ll be there every week, reviewing each and every new episode.

Sorry for those of you that didn’t really want to read this, even if nobody reads it because it isn’t going to stick around the main page for long, but I had to do a little bit of mind cleaning, to sort out what I intend to do with my blog.  And if you can’t stand reading huge walls of text online, it’s good for you, so stop complaining.  It’s not like you’re being forced to read anything scholarly.

If you liked my review, Buy the Manga Here: Naruto – Volume 10