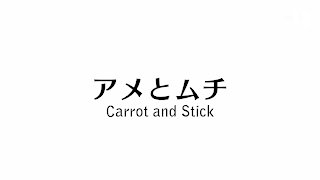 On their way to Shonen Jack Takagi talks about his past a bit, and his family. A good scene, that gives Takagi’s motivation for wanting to become a mangaka. When they get to Yueisha, a parody of Shueisha, they fill out a form at the reception desk, with Takagi acting nervous. 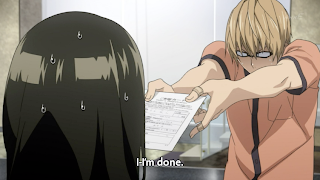 They meet with Hattori, and editor at Shonen Jack, and I can’t help but think that this is where the show will really start getting good. After Hattori reads the manga, the narrator reads the manga, and we see panels from the manga itself, giving a summary of the manga. 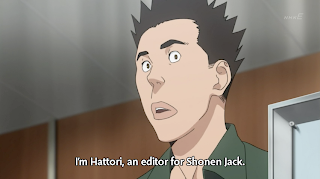 I really like this because unlike in the manga, where we only heard the basic idea of their manga but never saw the story itself, we actually get to see that Takagi and Mashiro aren’t half bad. The story itself is interesting, the premise is intriguing, and while there are interesting parts, overall the execution is only so-so. Which I think was on purpose, to show that while they have good ideas, they aren’t quite up to par with what they’d need to get published. 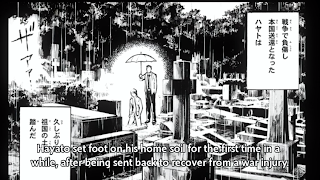 Hattori critiques their story, but asks them to bring their next manuscript to him. He gives them his business card. 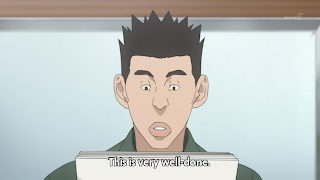 Mashiro wonders whether they can trust Hattori, and it isn’t until Hattori mentions it being a gamble, something Mashiro’s uncle always used to say, does he think he can trust him. Hattori decides to submit their one shot to the magazine’s monthly prize, and later he is talking to another editor about how he thinks that the two of them have potential. He even goes so far as to claim that they’ll beat Nizuma in just three years. 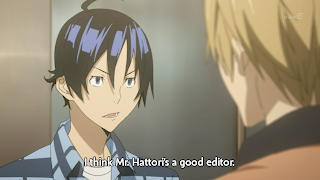 The protagonist has spoken, so it must be true!

It’s strange, this episode has the most happening in it out of the entire series, and yet I don’t have as much to summarize. I really loved Takagi’s back story. From what I know about Japan (and everything I know about Japane I’ve learned through anime), it seems like parents pushing their children to succeed is fairly common, and it gives him a good motivation for wanting to follow his own dreams. 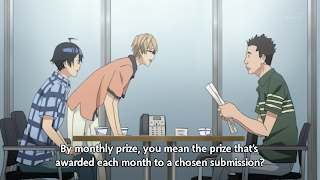 The scene with Hattori was great, mostly because of how the anime surprised me with how much further it goes than the manga. Because it has the space, due to the slow pace of this show, it can do what the manga couldn’t and show more than tell. Based on this episode alone I can tell that this is going to be a really fun anime. It may have a slow start, and perhaps it lost a few people that were originally interested, but if you are reading these reviews and were one of those people that dropped Bakuman because of the pacing, I highly recommend giving it a shot to this episode at least. If you like what you see here, chances are you’ll like the rest of the anime. 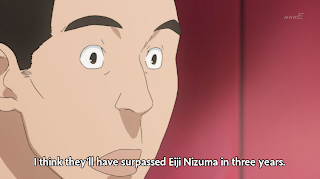 And here’s a little bit of trivia, for those of you that have read the second volume of the manga (review forthcoming) and have seen Hattori’s original design, will be interested to know that apparently his design was inspired by Ryuk from Death Note (you know, that manga and anime neither Ohba nor Obata will let us forget they wrote). Talk about best character design recycle ever! Kinda makes me wonder if Ryuk would recycle as well into other franchises? 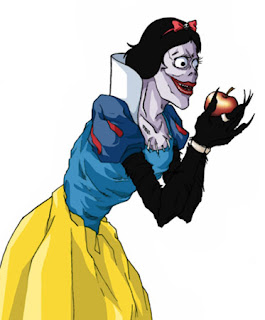 I guess this qualifies as Rule 36?

I think that’s a No.

For actually showing the story of their manga, and surpassing my expectations, I’m giving this episode a solid: 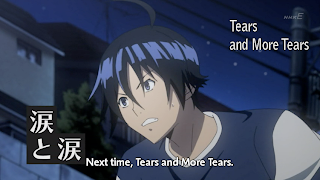