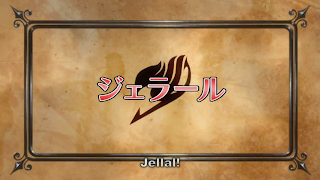 The magic council are discussing the R-system, a series of towers built by an unnamed cult, which they had thought destroyed. In the course of their discussion it is revealed that Sieglein, a member of the council, is the twin brother of Jellal, the leader of the people that kidnapped Erza. This amuses me because in the manga they left the connection vague. While in this case they go ahead and give a reason why the two look exactly the same. Up until the real reason is revealed of course.

In the flashback Erza and her friends are trying to escape. The cultists tell them that if the person responsible comes forward they’ll only punish that person and leave the others alone. They don’t want to damage their workers too much after all. Jellal admits to having planned the escape, when in actuality it was Sho who planned it. But the cultists don’t buy it, and take Erza instead.

The flashback ends and we return to Sho talking to Erza in the jail cell. Remember how I said she wouldn’t be a maiden in distress for long? While Sho has his back turned to her, delivering a fairly weak monologue, Erza manages to unhook her rope from the wall, knock him out, remove the magic blocking rope, and re-equip her armor. So now she’s free, and she is pissed. Back with the council Sieg tries to convince them to use Etherion, the magical equivalent of the A-Bomb. They are understandably reluctant to do so, despite the threat that the R-System posts. According to the cultists, the R-System is known as the Revive System, a dark magic that uses human sacrifices as fuel to resurrect one person.

Natsu and the rest arrive at the bottom of the tower and look for a way in. Juvia scouts down underneath the water to look for a way in, and finds a secret passage they can use. The only problem is that it would take ten minutes of diving to reach it. Not a problem for Natsu or Gray, but a fairly big problem for :not-a-shonen-male-character” Lucy. Juvia provides them with bubbles of oxygen trapped in water to put on their heads, gaining Natsu’s admiration. 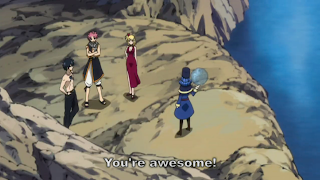 Of course Natsu, being Natsu… 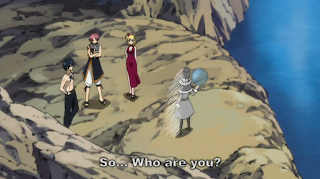 Also, Juvia has the best lines ever, and I couldn’t help but make this: 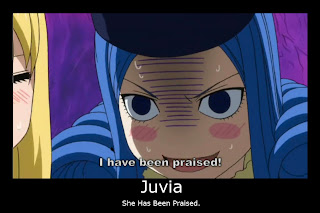 They manage to break into the tower, but are immediately found by nameless guards, who are of course just as immediately beaten. But now Jellal already knows they are here, but invites them into the tower anyway. They go looking for Erza and Happy, with Natsu being less than discreet in his search methods, though that is in no way surprising. What is surprising is that they’ve found a large banquet set out for them, and are eating freely from it. They decide that since their presence in the tower is known, and they’ve been allowed to enter freely that it might be a challenge.

Erza finds them, and tells them to leave her, that she’ll take care of the entire thing by herself. Natsu tells her there’s no way they’re leaving, not with Happy still captured by Erza’s former friends. Natsu takes off looking for happy, and Erza, touched by their loyalty, decides to tell them about her past and her connection to the tower. 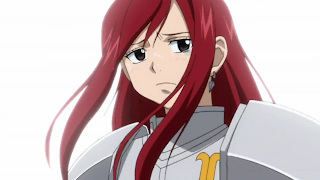 Erza tells them how she and several other slaves were being used to build the Tower of Heaven, and the flashback picks up again. Jellal manages to free Erza from the room where her life force was being drained, and they try to fight their way out, but are both captured again and Jellal is taken in Erza’s place.

Erza finally snaps and fights back against the jailers once they try to take them back to work. The moment where she convinces the other slaves to fight back is pretty motivational, well written and well scored for the music. Overall it’s a pretty powerful scene, if you can get over how tiny she looks trying to lead a rebellion. 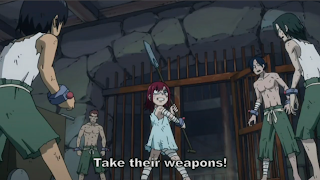 Thus proving that Erza easily has the longest track record for Shonen female characters who can kick righteous amounts of ass. The episode ends with Erza explaining that at the same time that they were rising up against their slavers, the boy known as Jellal changed and became what she considered pure evil. And thus the last image of the episode is not only incredibly disturbing but also accompanied by that incredibly inappropriate upbeat ending theme. 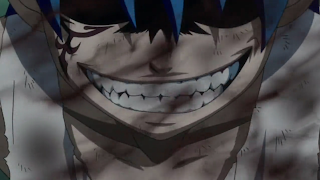 Not Pictured: Appropriate music.
This episode was pretty good, not one of my favorites, but not terrible. While I hate flashbacks on principle, this one is shaping to be pretty good. Granted I already know the story, but the musical accompaniment for the dramatic scenes has to be mentioned, as it creates a very inspiring, dramatic mood.

But, I know this is a little late, but I plan on being caught up by today.